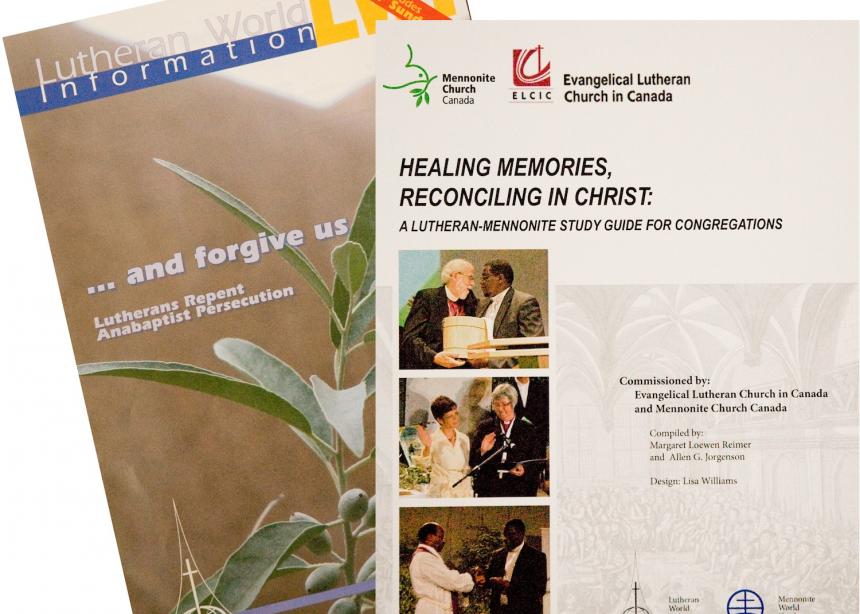 , Ont.—Conrad Grebel University College and Waterloo Lutheran Seminary—engaged in a bit of humour by having a Mennonite talk about “grace” and a Lutheran expound on “discipleship.”

“We wanted to rattle everyone’s paradigms,” said Robert A. Kelly, Lutheran professor of systematic theology, in a day of “conversations” between Lutheran and Mennonites on Nov. 26 at Wilfrid Laurier University, as part of the ongoing reconciliation and healing process between the denominations. Presentations by an equal number of professors from the two institutions followed an evening of healing ceremonies, testimonies, confessions, shared hymns and choral selections.

Kelly, who grew up and was educated in “liberal” California, admitted first off that “this Lutheran has been tainted by Anabaptist ideas about public discipleship by the likes of John Howard Yoder, Clarence Jordan, Ron Sider and Jim Wallis, not to mention Dietrich Bonhoeffer.”

He confessed that, out of the Reformation and Martin Luther’s influence, Lutherans “became so worried about their own salvation that they thought about little else. They never worried about the good of their neighbour or the welfare of their communities.”

Over time, however, they got over that preoccupation. Today, that mantra has been transformed into something that says “by grace, the God who has saved us in Christ has called us to be responsible for the welfare of our community and for the future health of creation.” The caveat, though, is that, even with the best of intentions, “we did horrendous damage to the very people we were trying to help,” citing the scandal of Canada’s residential schools as the classic case of trying, “in their own view,” to be redemptive with aboriginal children while “destroying a culture.”

In like manner, Tom Yoder Neufeld, professor of religious studies at Conrad Grebel, quipped that it was a “sign of God’s grace that, unlike in the 16th century, today we do not have a disputation, but a dialogue between sisters and brothers who know themselves to be members of the same body,” confessing that there is much for “us Mennonites to grapple with when it comes to grace.”

Taking their cues on grace from the Sermon on the Mount, rather than from the Apostle Paul in his letter to the Ephesians (God loving us even in our sinfulness), Mennonites, Yoder Neufeld said, always knew “Paul was Lutheran!” Seriously, though, the professor confessed, “As much as there is sometimes a sense that ‘grace’ is someone else’s agenda, there are some among us who feel strongly both the lack of full appreciation in our tradition about grace and its centrality in the Christian life.”

Citing several Anabaptist thinkers, such as Stephen Dintaman who decried Harold Bender’s “Anabaptist Vision” as so confined to ethics as to miss the “brokenness and sinfulness many of us Mennonites struggle with in our broken lives,” Yoder Neufeld claimed a certain “fatigue” has evolved in “trying too hard.” He[TYN1]  noted the work of a colleague, Arnold Snyder, who, for decades from his work in Nicaragua and his study of 16th century Anabaptism, has insisted that to love one’s enemies requires the gracious work of the Holy Spirit.

And in highlighting the ongoing debate about grace in Mennonite circles, he cited the polarities of the late J. Lawrence Burkholder, who argued in his dissertation for a kind of “social responsibility” that is not squeamish about getting one’s hands dirty in engaging justice in the world, and the late John Howard Yoder, who, according to Yoder Neufeld, worried that an over-emphasis on grace “cuts the prophetic nerve of the church’s witness when it becomes the back door to not following Jesus.”[TYN2]

Jeremy Bergen, professor of religious studies and theology at Conrad Grebel, cautioned against giving Anabaptist martyrs celebrity status in the reconciliation process, saying that if these martyrs “truly point to Christ with their entire lives and with their deaths, then they are witnesses for the entire church, not just Mennonites.” He asked Mennonites to “cease to regard them as martyrs “until we discover with our Lutheran partners whether and in what way they might be witnesses for the whole church.”

Offering the human touch to an otherwise heavily theological conversation, Kristine Lund, director of pastoral care and counselling at the Lutheran seminary, said that the road to forgiveness is a process, taking different forms with different individuals or institutions. While it has therapeutic value, forgiveness also carries implicit vulnerability, leading to a “terrifying, but unbelievably exciting” experience.

Some limitations are that forgiveness doesn’t always require repentance and it doesn’t always result in reconciliation, she said. But the popular notion that says “forgive and forget” is to throw away a valuable experience, she suggested, adding that to genuinely forgive is a way to freedom.

When asked during the final discussion what Jesus would do if he walked down University Avenue, Waterloo, today, Kelly answered, as a good Lutheran, that he didn’t know specifically, but whatever it was “it would get him arrested.” 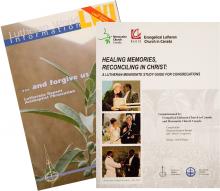 The Burkholder Benner cites should be J. Lawrence, not J.R.

You are right, Philip. I stand corrected. It will be corrected in the print edition.