Over the years John Wiebe has been a musician, teacher and producer 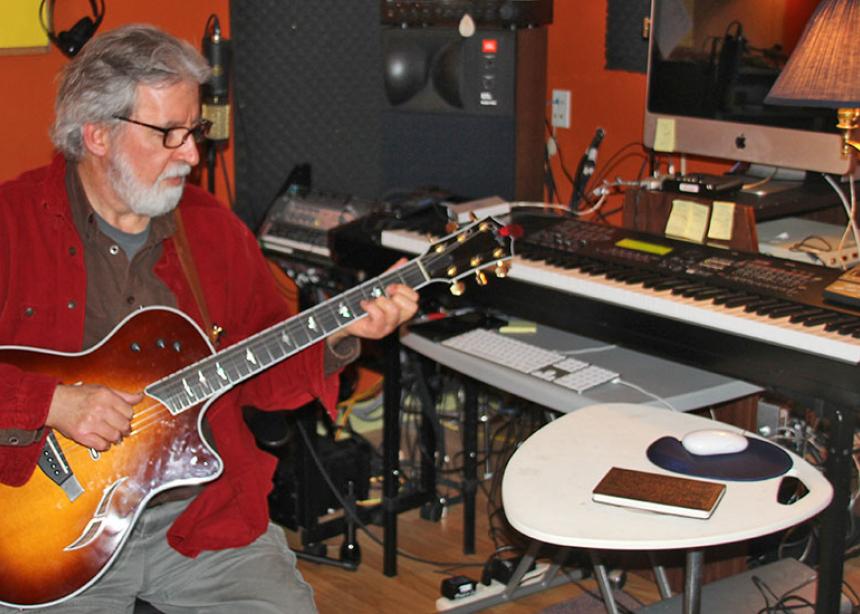 The music studio and classroom in the backyard is decorated with Apple computer prints of creative individuals. John Lennon and Yoko Ono, Einstein, Picasso, Amelia Earhart, some with the Apple logo covered with a piano sticker, share the walls with a painting by Leighton Jones of the Children’s Band.

John Wiebe, who describes himself as “kind of burnt out from teaching” right now, still teaches a few dedicated students, but has cut down considerably from the days when he taught at home and at Rockway Mennonite Collegiate in Kitchener.

Instead, as he nears 65, he’s spending time working through his many binders of arrangements, études and original compositions. Some need finishing, others organizing, and others yet are being assembled for future publication.

Like most musicians, Wiebe has cobbled together a life through the years beginning in St. Catharines, moving to the Bracebridge area of central Ontario, and finally to part of Ontario with lots of Mennonites, just not “Russian Mennonites” like he and his wife Helmi.

While living in Waterloo a number of years ago he penned “A Song for June” for his friend Doris Gubler’s wedding to David Martin, who is now executive minister of Mennonite Church Eastern Canada.

With his studio in the backyard he also produces CDs for local musicians, including the Rockway foursome Moglee a few years ago. Local performances in retirement homes and at Steinmann Mennonite Church in Baden, and with James Krabill’s Reunion Vocal Band round out his work. He joined that group after answering a Mennonite Reporter ad in the late ’80s seeking “all pop Mennonite musicians.”

Soft spoken, gentle, not driving up to a point like a stereotypical Russian Mennonite, Wiebe draws inspiration from the photos in his studio. Lennon’s “Give peace a chance” rings true for Wiebe. Faith has a place in his music, Wiebe says, although “not in a ‘gospelly’ way.”

And “the past is the past,” Phil Everly of the Everly Brothers once said. Although Wiebe says he “lacked the business side” of music, he has been able to follow his passion, waiting for the waves of inspiration to roll up on the beach and dive in. “Eventually it’s hard work,” he says.

Wiebe is currently involved with  Bryan Moyer Suderman, working on a project that combines the themes of home and environment. As he walks to the Home Hardware Store in New Hamburg, Wiebe meets friends and fellow church members; it’s those relationships that make a place home for him.

“We’ve gone the wrong way about what’s worth something,” he says, lamenting the fact that the market dictates what is of worth, not measuring the people or what they need to live, but rather what the profit can be. Inspired and quietly inspiring, Wiebe still makes his musical mark.