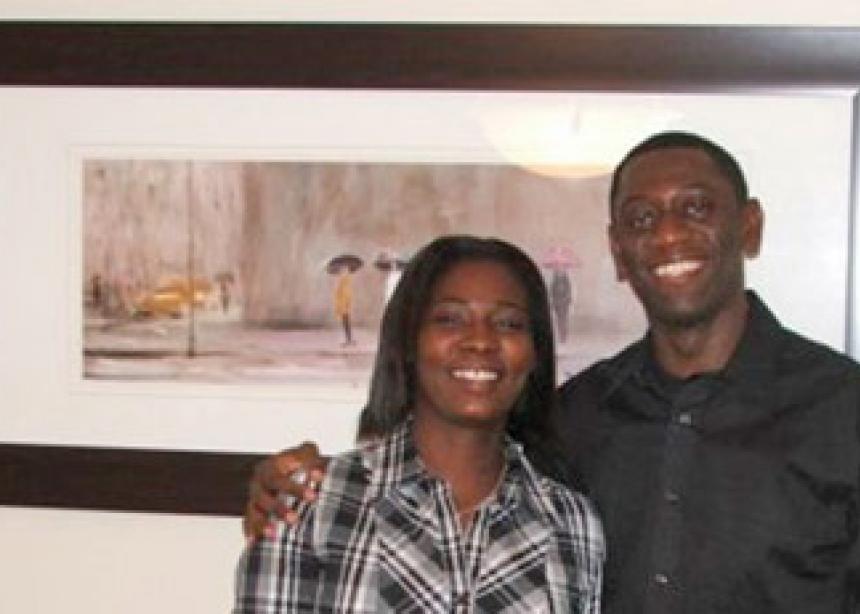 Jan. 12 was a day like no other for Arisnel Mesidor. On this day, Haiti, his homeland—and the poorest country in the Western Hemisphere—was devastated by a 7.0 magnitude earthquake.

Mesidor, a master of Christian ministry student at Canadian Mennonite University, Winnipeg, felt particular anguish over the news. Originally from northern Haiti, he moved to capital, Port-au-Prince (where the quake’s epicentre was located), before coming to Winnipeg in 2004. “This is my country, these are my people, and, most importantly, this is my family,” he said.

Mesidor’s parents still live in northern Haiti, but his wife, brother, grandmother, aunt and cousins were all caught in the middle of Port-au-Prince along with millions of other Haitians.

His initial reaction to the news was extreme shock. His first thought was for his wife and family. He immediately decided to head to Port-au-Prince and look for them, and, after finding and attending to their needs, to spend time volunteering with the many humanitarian aid organizations there.

CMU was “very, very supportive,” Mesidor said, by raising $1,765 for him to put towards travel expenses.

Dana Petker, CMU’s coordinator of commuter, disability and international programs, and students Anna and Jordan Braun also collected various supplies to send with him to Haiti.

“There were so many donations that I couldn’t bring it all down myself,” Mesidor exclaimed.

“Right after the earthquake, I started getting messages on Facebook from students and faculty asking me how I was and what they could do,” he said.

One of those concerned individuals was Mesidor’s program advisor, close personal friend, and biblical and theological studies prof, Pierre Gilbert. Gilbert sent Mesidor an e-mail after he learned about the earthquake, to inquire after his family and to let him know that he was being prayed for.

“Physically, I couldn’t do anything, but it’s amazing to know that someone prays for you. . . . That gives you strength,” Gilbert said.

Syvelie, Mesidor’s wife, was found alive and unharmed, as were all of his immediate family members, although a cousin was killed.

Mesidor then turned his attention to getting Syvelie a visa to come to Canada, as previous attempts were unsuccessful. He spent nearly every day at the Canadian Embassy and finally got her a six-month visa after three full days there.

Mesidor and his wife are now living together in Winnipeg, due, in part, to the aid of CMU.

Mesidor has accomplished a great deal in a short period of time, and he’s not stopping yet. He has started a not-for-profit organization called Samaritan Partners for Shelters in Haiti, to address the issue of a lack of shelter there.

Many Haitians are living on the street because their homes were destroyed or are unsafe for habitation. These include Mesidor’s 90-year-old, wheelchair-bound grandmother, a 60-year-old aunt and a younger brother, who are being sheltered by only a blanket. “This protects them from the sun, but not the rain,” Mesidor said.

“Our goal is to get as many people as possible off the streets of Port-au-Prince,” he said of his organization. “These are our brothers and sisters, no matter where they are. . . . As citizens of humankind, we feel compelled to do something.”

In the long term, Mesidor hopes his organization can help build higher quality housing for those who have no shelter in Haiti, and ultimately bring families to Canada.