Put on those shoes of peace

Those Shoes of Peace. By Barb Draper. Performed at Floradale Mennonite Church, Ont., April 9 to 11. 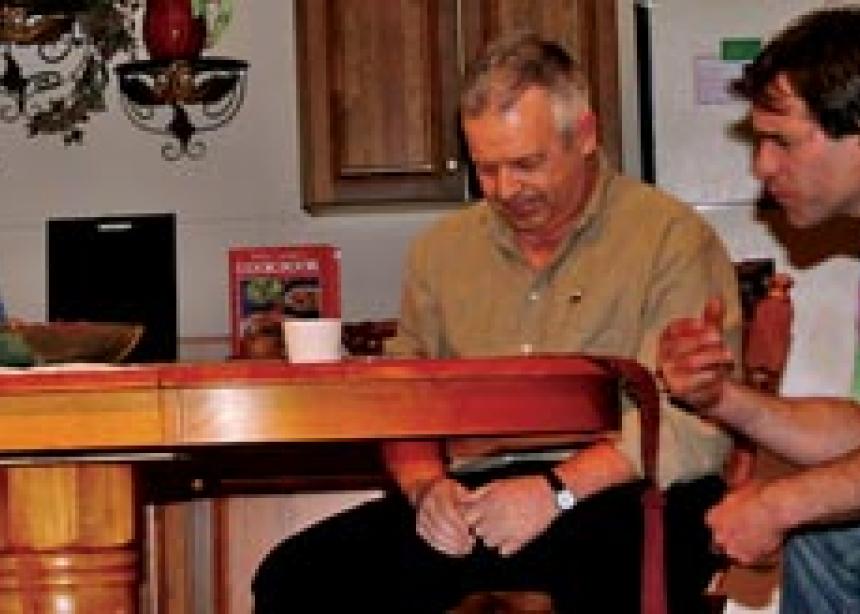 Applause broke out in the audience at Floradale Mennonite Church when Kevin Bauman (played by Robb Martin), a recently returned Christian Peacemaker Teams (CPT) member from Palestine, responded to his uncle Trevor, a Zionist Christian: “But the land belongs to the Palestinians!”

It was then that Leon Kehl, Floradale’s congregational chair, knew that something was different. “On the previous two nights, nothing had happened at that point,” he said, but on the third presentation of Those Shoes of Peace about 80 Muslims from Waterloo Region, some of them Palestinians, were present. They had been invited to attend the play and to provide an eastern Mediterranean lunch as a fundraiser for a refugee sponsorship program jointly supported by Floradale, Waterloo North and Erb St. Mennonite churches and the Waterloo mosque.

Playwright Barb Draper, who also performed in the play, noted that Trevor (played by James Martin) had wondered what the guests would think of him as he used Christian Zionist lines like, “But that land belongs to the Jews. God promised them that land. Made them that promise way back in the Old Testament. . . . There’s no way we can stop God’s plan for the future.”

The play focuses on Kevin’s return from a stint walking with Palestinian children to protect them from Jewish settlers. Many different opinions are given. As Kevin and Trevor argue, Aunt Betsy notes wryly, “Kevin, it’s funny. You went over there to the Middle East to bring peace, and it doesn’t seem to have worked. And now you’ve brought conflict back to your own family.”

Throughout the play other conflicts erupt and are worked through. A neighbour is dealt with carefully when his anger overflows at the Baumans when their tree is blown down onto his roses in a storm. Another neighbour, who has severe conflict with her in-laws, is counselled on how to approach a family gathering. While some of the solutions lean towards conflict avoidance, the crokinole games the family takes part in are fierce with their controlled conflict.

Draper, who has written a play and histories before, wanted to bring the issues around peace to the fore, not only in flash points like Palestine but in families and communities. She also noted that the play has provided amazing community building. Anyone who volunteered was given a job to do, even if it meant writing additional characters into the play.

Sold out for two evening performances and dinners, and nearly so for a matinee, the proceeds of $9,859 will be split equally between local refugee support and CPT.