From program partners to friends 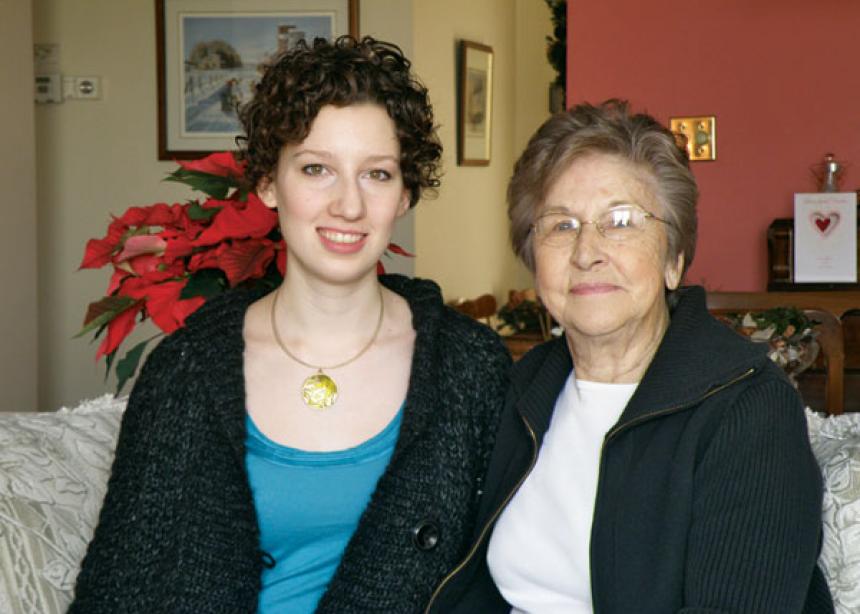 It is not normally an unusual sight, good friends finishing each other’s sentences and laughing, except that Maggie Martens and Gillian Mayers have something special, perhaps even rare. They have a true friendship that transcends age barriers.

The relationship began in 2002 as part of a mentorship program at Edmonton’s First Mennonite Church. In Grade 7, young people who wish to participate, suggest names of adults they want to get to know. A mentorship committee matches youths with adults who are willing to be part of the program.

Mayers knew she wanted to partner with Martens, her long-time Sunday school teacher and a senior. “Quite a few wanted Mrs. Martens, but I got her first,” Mayers says with a smile.

Being selected was meaningful for Martens. “I actually was so touched and so honoured that someone that young would want to have some kind of affiliation with me,” Martens recalls.

While Martens and Mayers had a teacher-student relationship, getting to know each other personally made them each a bit nervous at first. Martens remembers that “Gillian was very, very shy, but we managed. On our first meeting I still remember we went to Boston Pizza on the 18th of October. I was as nervous as you were,” she says to Mayers, “but we got to know each other.”

Mayers concurs: “I was excited and nervous and shy. Talking one-on-one is different than in a big classroom.”

During six years in the program, the pair shared interests through a wide range of activities. Martens went to the stables to watch Mayers’ riding lessons. They also visited a teddy bear museum, went to games nights at their church, sewed, cooked for an inner-city meal program, volunteered at the annual church craft sale, visited and regularly noticed each other in the church foyer.

In their final formal year of the mentorship, they decided on a special project: a patchwork quilt to make and donate to someone who needed it. The sewing part finished, they took it to a quilting group made up mostly of seniors to fill and tie.

The quilt was given to the daughter of a Palestinian family the church helped bring to Canada through Mennonite Central Committee.

Martens and Mayers have supported each other during celebrations, including graduation and baptism, and in difficult times like the illness and death of Martens’ husband Peter last year.

“When he had the stroke in May, then Gillian and her mom and dad came up,” Martens says. “I was so touched; that just meant so much to me. When I saw [Gillian] at the funeral . . . that was very comforting for me. I guess you feel a closeness that you don’t often think that you have to someone.”

Being there for each other is something that continues for the two. When the formal program finished with Mayers’ graduation from high school, Martens asked her, “Is this going to be over?” Mayers replied, “It will never be over!”

The friends agree the mentorship program is of great importance in helping to get relationships started. For Mayers, whose grandparents do not live in the city, being with Martens provided a connection with seniors that she wouldn’t have otherwise had. “I think it is really important to keep the mentorship program up,” Mayers says. “It forces the different generations to interact.”

Asked what advice they have for other seniors and youths interested in getting to know each other, Martens and Mayers answer enthusiastically.

“Don’t ever think that you’re too old,” says Martens. “Embrace the situation and approach it thinking that this will be a good thing and that you’re going to make the most of it. Consider it a gift if somebody asks you for something like that. That is a gift.”

Mayers remembers what it felt like to be in Grade 7 and just beginning the relationship. “Don’t be afraid,” she says. “[Seniors] are willing to help out and they want to make this work, too.” 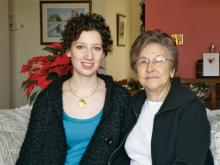