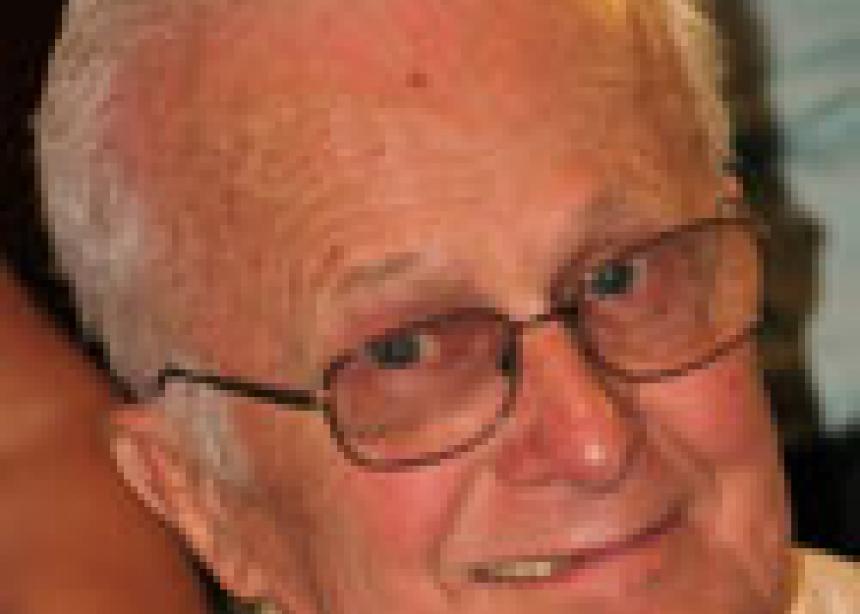 Leland Harder, a scholar of both Anabaptist history and Anabaptists of the late 1900s, died at the age of 86 in North Newton, Kan. Harder was a pastor, seminary professor and sociologist, who combined all of these areas to make significant contributions to the church during his lifetime of ministry.

In 1958, Harder and Bertha, his wife, joined the new faculty of Mennonite Biblical Seminary in Elkhart. Over the next 25 years, he taught at the seminary and also served briefly as associate director of the Institute of Mennonite Studies (IMS).

Harder taught in the area of practical theology and directed field education, matching students and congregations for internships. Jacob Elias, professor emeritus of New Testament at Anabaptist Mennonite Biblical Seminary (AMBS), was a student of Harder’s and later a colleague. “My student years at AMBS in the 1960s were profoundly shaped by the way Leland encouraged me in my sense of calling toward pastoral ministry,” he said. “When a part-time ministry position opened up in South Bend, Ind., he recommended this as a setting to gain experience and receive supervision. Two years of challenging and inspiring ministry set the stage for me to accept a call to Mountainview Mennonite Church in Vancouver.”

Two areas of significant scholarly research serve as a lasting legacy of Harder’s work. One is the sociological research of church members, conducted by Harder and J. Howard Kauffman in the 1970s. They reported their findings in Anabaptists Four Centuries Later: A Profile of Five Mennonite and Brethren in Christ Denominations (Herald Press, 1975).

A second study, conducted in 1989 by Kauffman and Leo Driedger as an update, provided material for Harder’s book Doors to Lock and Doors to Open: The Discerning People of God (Herald Press 1993). Harder interpreted the research in ways that would help congregational members enter more fully into decision-making in the church.

Driedger reflected how the study involved both Canada and the U.S., and both the General Conference Mennonite Church and what was called the “Old” Mennonite Church. “[N]ow we are the Mennonite church,” Driedger said. “We were very much at the grassroots of making that work,” he added, helping the different Mennonite groups understand themselves and each other better.

The other area of Harder’s scholarly work is Sources of Swiss Anabaptism (Herald Press, 1985), the fourth volume in the Classics of the Radical Reformation series coordinated by IMS. This involved collecting and translating, with help from others, the letters of early Anabaptist leader Conrad Grebel.

It is “a definitive study of that topic,” said Willard Swartley, professor emeritus of New Testament and former AMBS dean. “It’s an incredible contribution to the church.” Swartley remembers Harder as a careful scholar. “He didn’t do his work hastily. He put years into this volume.”

After completing high school in Hillsboro, Kan., Harder served in the navy and then earned a bachelor’s degree at Bethel College, North Newton, Kan., in 1948. He married Bertha Fast, a student at Mennonite Biblical Seminary in Chicago, in 1951. In 1983, the Harders both retired from teaching at AMBS and moved to North Newton. Harder is survived by his son John of Windsor, Ont.; his son Thomas and wife Lois of Wichita, Kan.; and five granddaughters. 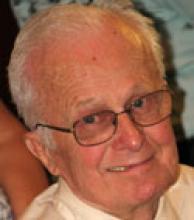 A few months ago I was in Newton Kansas. I always seize the opportunity to look for the old Mennonite books for my research on my wife's family(cousin of Delbert Gratz). I bought the above book in a downtown bookstore and was surprised when I got home that it had been edited, thoroughly in every way by Leland and as best I can tell one other individual. The book was a gift to him by J. C. Wenger stating: "To my appreciated colleague, Lee In Christian love, Elkhart AMBS- Sincerely JC. I was thrilled to see all of the work done in this book but began to wonder if after Lelands death someone had not looked inside the book and seen the extensive effort in correcting Grebel's Letters. If this was intentional then I will count my blessings, but I would not want to keep the book if it was given away without the knowledge of the work inside. Please let me know if you would like the book returned. If you want more info, send me an e-mail address and I will send copies of the work that was done in the book so you can better judge it's value. It would be a shame if it was meant to update Wenger's book and all of his knowledge, insights and labors were lost. Hope to hear from you. In Christ, Dave Thompson

Dave, I am the elder son of Leland. After his stroke in 2011 he moved from the duplex where he and Mom had lived (Mom died in 2008) in Kidron Bethel retirement village in North Newton to the assisted living center. When it became clear that he would not be able to return to independent living, my brother Tom and his wife Lois coordinated an estate sale of items we would not keep and the distribution of items that would be kept. The latter included most of his library of books, donated to the Newton bookstore where you found the volume you purchased. (Other writings, research, publications, professional letters, etc. were donated to the Mennonite Archives at Bethel College.)
I'm sure the book you bought is exactly as Dad had it and was not altered after his death. He would have used it as an important part of his magnum opus research on Conrad Grebel; editing and translating were done by a friend who lived in St Louis, where Leland and Bertha had served a three-year sabbatical ministering to the Mennonite Fellowship prior to retirement.
Dad published 'The Sources of Swiss Anabaptism' as the major scholarly outcome of his many years of research on Grebel, which included the translation of all of Grebel's extant letters to Ulrich Zwingli and others. He also created dramatic presentations of the life and times of Conrad Grebel, in two of which, a comprehensive 2-hour one man show, and a Sunday service or chapel-length one-man presentation, I performed as Grebel.
I hope this addresses your concerns about the J.C. Wenger book!