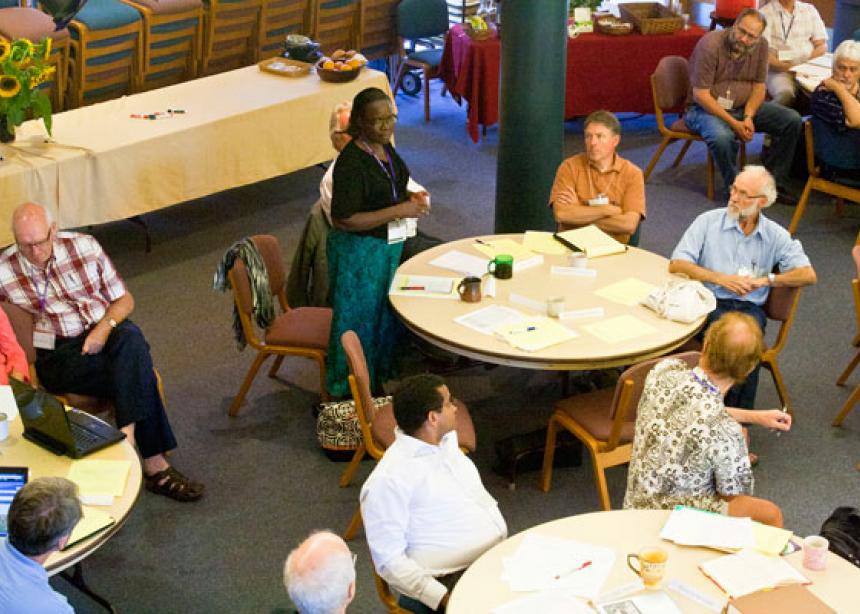 More than 35 people from seven countries gathered at Goshen College on August 5-8 for an international consultation on the theme, “Bearing Witness: A New Martyrs Mirror for the 21st Century?” Hosted by the college’s Institute for the Study of Global Anabaptism, the international gathering explored the possibility of a major story-gathering initiative, focused especially on the theme of “costly discipleship.”

According to conference organizer and Goshen College Professor of History John D. Roth, Anabaptist-Mennonite groups have had a long tradition of story-telling, particularly stories of those who have suffered or died because of their convictions. In 1562, Anabaptists in the Netherlands secretly published a collection of martyr stories, known as Het Offer des Heeren (Sacrifice Unto the Lord). The book appeared in many subsequent editions, culminating in 1685 with an expanded version of stories called the Martyrs Mirror. The Martyrs Mirror is a richly-illustrated collection of narratives, hymns, confessions and devotional reflections with the theme of suffering for faith.

Since 1685, no further expansions of the book have been published, even though many Anabaptist groups continued to suffer for their faith. Suffering continues today, including in places where the church has expanded internationally, like Indonesia, India, Zimbabwe, Congo and Colombia.

Roth invited scholars and church leaders from a wide range of groups to discuss the possibility of gathering stories of costly discipleship. He described three main reasons for the consultation.

“First, we hope that the project might encourage deeper faithfulness to Jesus among all those who encounter the stories,” he said. “Second, the project should strengthen relationships within and beyond the global Anabaptist church. Finally, we think it is important to stand in solidarity with those who have suffered for their faith, particularly the vulnerable and the voiceless who are easily forgotten in history.”

Participants in the consultation affirmed the project, encouraging Roth and co-moderator, Bluffton University Professor of Communication Gerald Mast, to cultivate a broad base of support for the research and gathering phase. The group also identified several important challenges that will need to be addressed as the project continues.

“There can be a danger,” said Jack Suderman, former General Secretary of Mennonite Church Canada, “of speaking about victimization from a perspective of power, or that we use the suffering of others to bolster our own positions.”

Other participants noted the logistical and practical challenges of gathering stories from a global body numbering 1.7 million members. Participants also wrestled with the question of who “qualifies” for inclusion in the project. Some argued for narrow definitions—focusing the initiative only on individuals from Anabaptist groups who had died for their faith. The majority favored a broader scope that would include some stories of nonresistant Christians outside the Anabaptist tradition, as well as those whose suffering did not necessarily result in death. Roth noted that the title of the consultation, “Bearing Witness,” was an effort to shift the focus from physical suffering to the deeper reasons behind the suffering.

“Originally, the word ‘martyr’ simply meant ‘witness,’” he said. “This project should not be seen as an attempt to make a fetish out of torture, suffering or victimhood. Rather, we are trying to encourage the church to continue to ‘bear witness’ to the faith, even if it should entail great cost.”

A high point of the consultation came on Tuesday morning when various participants shared stories from their own experience. In addition to stories from the church in Ethiopia and the former Soviet Union, Alix Lozano, a Mennonite theologian from Colombia, related a story from her country of what she called “living martyrs.” For more than a decade, paramilitary groups and the national army of Colombia have fought to control the land owned and farmed by a small rural community in the southern part of the country. Recently, a multinational company also expressed interest in the land, since it is situated in an area rich in minerals.

Last December, the local pastor, who also serves as a community leader, was told that he and his community would need to leave. When he refused, he and his family received a series of death threats. Initially, he took the counsel of outside supporters who encouraged him to take refuge. Recently, however, he has decided to return to his community, accepting the risk of death.

“He has returned despite all these threats,” Lozano said. “The situation right now is very difficult for him and his family because these armed groups are persistent in moving him and his community. In these communities, their land is their life. When you take their land from them, you take their lives from them as well. This is a story of this community. They’ve opted for a nonviolent way, even if it means individual sacrifice. They are the living martyrs in our context. Even though they are physically alive, the strategy of those who want to remove them has undermined their spirits and threatened their lives.”

When the members of the consultation listened to these stories, Mast said, “we became spiritually united as brothers and sisters in Christ. This experience of growing spiritual closeness convinced me that gathering and sharing stories of costly witness in the coming years will strengthen relationships throughout the global Anabaptist family of faith.”

Gathering these and other stories, Roth said, “will require an enormous amount of work along with great sensitivity and care.” But he and Mast are optimistic about the future and hope to continue moving the project forward.

“We heard from many people from all kinds of settings that they need this resource in their churches and schools and families,” Mast said. “This need was often expressed with some urgency and with the counsel to move beyond discussion toward action and organization and accomplishment of the emerging vision.”

Although the ultimate outcome of the “Bearing Witness” initiative has not been defined, Roth hopes to make significant progress by 2025, which marks the 500th anniversary of the beginning of the Anabaptist movement.