The Prince of Peace is Jesus Christ 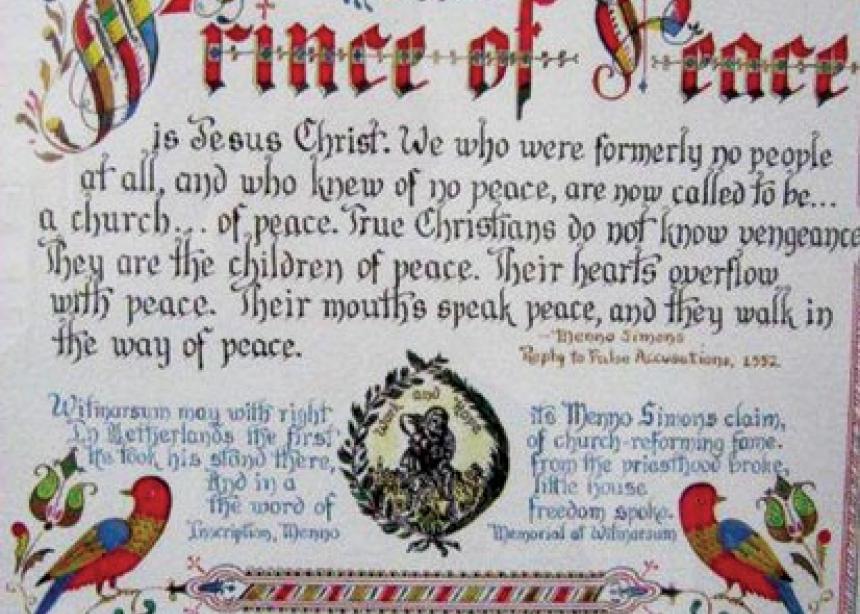 Grace Mennonite Church is engaged in an ongoing and earnest conversation about the Anabaptist peace position.

Arnold Hildebrand, a church member and facilitator of a recent book study on the issue, says, “We need to make sure our position is clear. We have a shadow presence here in Brandon and I’d like to even almost change our church name to Peace Church and then make it public that we are the Peace Church in Brandon.”

Grace Mennonite is the only Mennonite Church Canada congregation in the wider Brandon area.

Pastor Ken Quiring agrees that members are looking for a way to explore the issue of peace and get a better understanding of their identity as a Peace Church. This fall the adult Sunday school class embarked on a study of Arden Thiessen’s book, Keeping in Step With the God of Peace. Several times they invited Thiessen, a former pastor and teacher at Steinbach (Man.) Bible College, to join them to inform their discussion.

“It is a well-researched book that follows right through from the Old Testament to New Testament, demonstrating a very well-reasoned position that the Anabaptists have on peace,” says Quiring.

Della Lee attended the class regularly. The study awakened in her a need to become a more active peacemaker.

“I had been going with the cultural assumption that if people were in conflict with each other and I was not involved, I should stay out of it,” she says, “but from studying the book I decided that mediation is helpful.”

Since then, Lee has been stirred to enter into some situations of conflict in the role of peacemaker.

“One thing I learned is to be more of a friend to those currently in conflict with another church member and see the conflict in terms of growth,” she says. “A lot of people feel hopeless in their conflicts, stuck forever. If you can help them to see a vision of the future where that relationship can be healed, good things can come out of that conflict. I am motivated to do that.”

The class grew from its usual dozen or so participants, to 15 to 20.

“We had to add another layer to our circle at times,” says Hildebrand.

The class reflected the varied backgrounds and viewpoints of church members.

Elsa Dick, who came to Canada after the Second World War, brought a different perspective. Her memories of that war as a 12-year-old—when her mother died and her father was sent back to Russia from Germany—shaped her thoughts on peace. Experiences of hunger, loss and fear confirm for her that, “I don’t believe in war. I taught my children we don’t believe in war. It is wrong, but sometimes we talk too much about the peace situation and not enough about peace in the heart.” That, after all, is what has sustained her all these years.

“Not all were in agreement, but it has been a great platform for our church to work from,” says Hildebrand. “People are saying we are not done yet; we want to talk some more.”

The congregation is considering studying the “The Second Mile: A Peace Journey for Congregations” series, a resource from MC Canada and Mennonite Central Committee.

“One of my hopes is to also get at justice issues, which are a part of being a Peace Church,” says Hildebrand.

“The Fractor,” a piece of art created for the 500th anniversary of Menno Simons that gives historical background in a variety of languages, has been given a place of prominence at Grace Mennonite, and the regular lighting of the peace candle reminds the congregation that it is a Peace Church. Congregants are hoping their journey will lead them to a better understanding of that identity and how they can carry it out into the world. 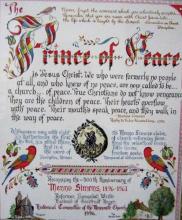 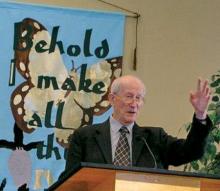 Arden Thiessen, author of Keeping in Step With the God of Peace, preaches at Grace Mennonite Church, Brandon, Man.