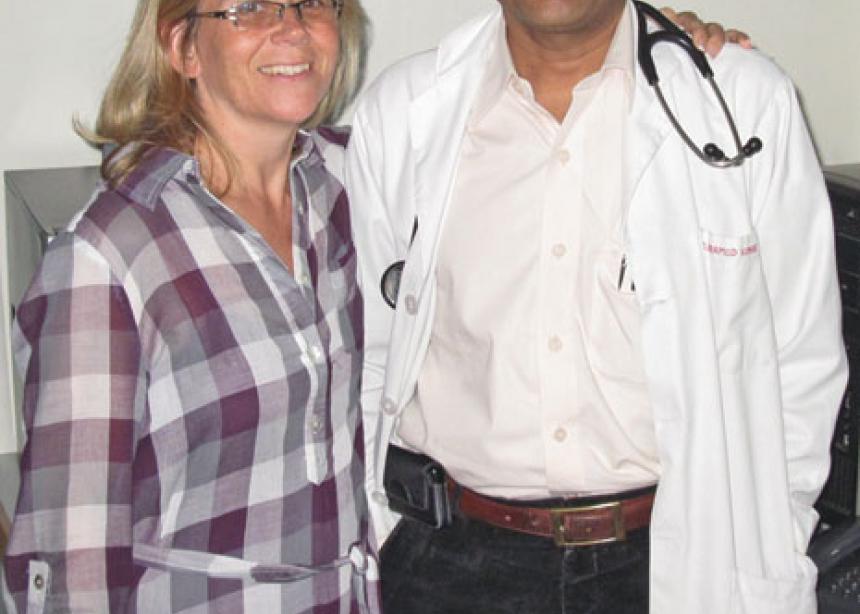 Twila Lebold poses with Dr. Kumar, who performed liberation treatment to open blocked veins from her brain in an effort to relieve her MS symptoms. The controversial treatment is currently not available in Canada.

“Did the prayers work?” was Twila Lebold’s first question after her liberation treatment in India to relieve her multiple sclerosis (MS).

“Prayer always works,” was the response of Dr. Kumar, her Hindu surgeon.

Prayer, faith and community are themes that run through Lebold’s story. Twenty years ago she was diagnosed with the relapsing-remitting form of MS. Her symptoms then included blindness and balance problems, which cleared up under treatment. In the ensuing years she married, had a family and began her career as a Kindergarten teacher.

According to the MS Society of Canada, up to 70 percent of people originally diagnosed with relapsing-remitting MS will develop secondary progressive MS, “and will slowly accumulate disability.”

In 2007, Lebold relapsed, showing decreased energy levels, and increased balance and mobility problems. In March of this year her doctors here told her there was nothing to be done but live with increasing disability.

Dr. Paolo Zamboni of Italy has theorized that MS is due to chronic cerebrospinal venous insufficiency, which can be corrected by stretching various veins in the neck and throat to renew blood flow from the brain. He coined the term “liberation treatment” for the procedure that is now performed all over the world, although not in Canada.

The Canadian Institutes of Health Research wrote in August that “there was unanimous agreement from the scientific experts that it is premature to support pan-Canadian clinical trials on the proposed liberation procedure. There is an overwhelming lack of scientific evidence on the safety and efficacy of the procedure, or even that there is any link between blocked veins and MS.”

This has not stopped many Canadians from going to other countries, including India, to seek the treatment.

As Lebold puts it, she had nothing to lose except the money: $12,500 plus plane tickets for her and her husband Ray Boehm, a teacher at Rockway Mennonite Collegiate, Kitchener, Ont.

While she was in India, prayer was offered up for her at Bloomingdale Mennonite Church, near Kitchener, where Lebold is the Sunday school superintendent; at her parents’ congregation, Avon Mennonite Church, Stratford, Ont.; and at Faith Mennonite Church, Leamington, Ont., where her sister-in-law is pastor. Many friends and family members also prayed for her treatment.

Lebold credits her daily contemplative prayer discipline, learned as part of the Lenten month of guided prayer run by the Mennonite Spiritual Directors of Ontario, for helping her to be centred and have a positive attitude.

“Did the prayer work?”

She believes that it did, even if she is not completely healed and will probably need repeated treatments as the veins can close up again.

While she is not petitioning the government to provide liberation treatment, she notes, “MS patients can’t wait.” The disease is progressive and some of the others in the group of five Canadians who travelled to India with her for the same procedure were—and remain—more disabled than her.

Lebold is still seeing gradual improvement more than a month after her Aug. 6 treatment. She is more mobile, and has better balance and much more energy. Earlier this year, before the treatment, she was considering part-time teaching for the fall, but now is looking forward to full-time work, as she sees her spiritual journey now as one of new life. 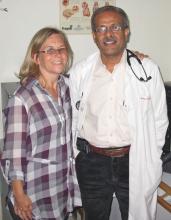 Twila Lebold poses with Dr. Kumar, who performed liberation treatment to open blocked veins from her brain in an effort to relieve her MS symptoms. The controversial treatment is currently not available in Canada.