A positive space to speak out 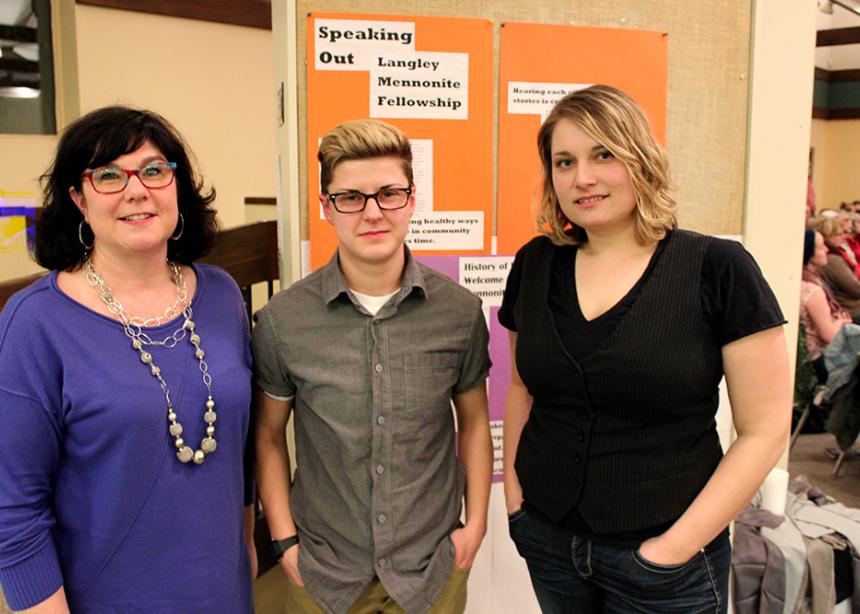 It was a “magical” and “spirit-filled” Jan. 24, 2015, evening for many who attended a Wildwood Mennonite Church event, held to provide a positive space for members of the lesbian/gay/bisexual/ transgender/queer (LGBTQ) community, family and friends to tell their stories and be vulnerable with each other. Some people felt safe to share publicly, even those who have had no connection to a church in many years.

Krista Loewen, a pastor of Wildwood Mennonite Church, was one of the organizers of the event. “There are so many misunderstandings and assumptions about people that are prevalent during discussions on sexuality,” she said. “We wanted to create a space for people to actually learn what it is like to be a part of this marginalized community.”

Loewen and others on the planning committee are worried that the church doesn’t hear from gender- and sexually diverse people on a national level. “If we don’t hear from a diverse set of opinions, how are we supposed to capture where the Spirit is leading us?” she asked.

They have also found past area church events to be unsafe places for people from the LGBT community. (See "Angry words call for a peaceful response," in the Nov. 24, 2014 issue.)

The planning committee for the Jan. 24 listening event wanted to do things differently by creating a positive space. The event drew those who haven’t felt comfortable entering, let alone speaking in front of a church in years.

One such person was Rachel Loewen Walker, who attended the now-dissolved Peace Mennonite Church in Saskatoon until she was a teenager. She said she is used to speaking publicly, but admitted speaking in front of a church made her nervous.

Loewen Walker recalled that church became a different place after she came out as lesbian and she didn’t return after she went away to attend Canadian Mennonite University in Winnipeg. She admitted there wasn’t an outward animosity, but there was a sense that it was a closed community that she didn’t fit into. “I’m proud to see this conversation happening now,” she said.

Childhood was marked by trying to be like the boys and feeling confusion when that didn’t seem right to family and friends, Dick shared. After growing up, Dick knew she needed to conform to the norms of her gender—growing her hair long and trying to suppress what came naturally—causing great internal conflict.

“But what I came to recognize was that the masculine identity and expression I felt as a child was the most honest, genuine self I had ever been,” Dick said. The recognition of her true self, and the physical expression of that when she cut all her hair off two years ago, was the most liberating moment of her life, Dick said.

Overall, the event was marked by courage and vulnerability, Loewen said. The organizers worked to create a positive space and believe it was a success in that way. More than 10 people, including parents of LGBTQ children, came forward.

“It wasn’t our great planning or preparations that made it a success, it was the Spirit within us that made the space magical,” Loewen said.

Other Mennonite churches have worked to create a positive spaces recently. Grace Mennonite Church in Steinbach, Man., is one such church.

After a year-long conversation about sexuality, sexual orientation and same-sex attraction, the church ended with an evening of sharing, Kyle Penner, the associate pastor, explained. “The evening went well,” he said. “We shared, we listened, we sang, we prayed, we learned, we cried and we hugged. . . . It's our hope that we can look back at the evening and remember it as part of our effort to build a community that supports each other as we try to follow Jesus together.”