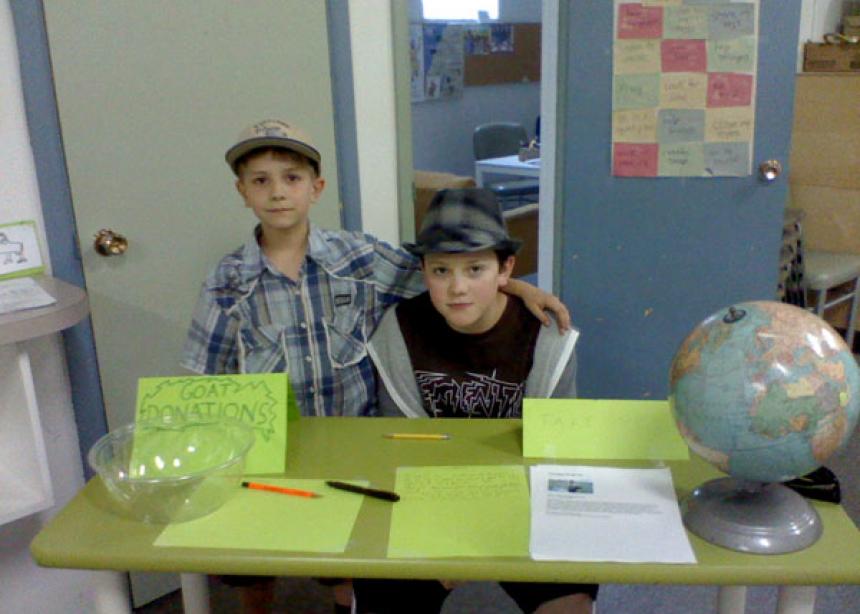 Derek (7) and Michael (10) Thiessen, comprising the entire Sunday School, began a goat project in June, just weeks before the last worship service of Portage Mennonite Church. They are not sure where will they will go to church now that it is closing.

For over 35 years “the little church that could” nurtured faith, built community, and sent many of its members out into the wider world to work in with MCC, Canadian Foodgrains Bank or Mennonite Church Canada programs. It was a place for those Christians who moved into the city of Portage la Prairie to grow in their faith and find fellowship with others who shared these Anabaptist convictions. On July 1, 2012, Portage Mennonite Church held its final service. “Growing the church to the point where ongoing programs could be conducted” was the one hurdle the church couldn’t surmount, said Gerald Loeppky, a long-time member.

PMC was called the “little church that could” because its small size never stood in the way of doing big things, said Astrid Peters, who together with her husband, Tony, was one of the founding members. Just two weeks before the closing service, the entire Sunday school, Michael and Derek Thiessen, decided to raise money to buy goats for Kenya through an MCC project. They baked cakes and raised over $800, enough to buy 18 goats. “It’s kinda sad the church is closing. I liked that church,” said Derek (7). Michael (10) agreed, “Our church was pretty fun. Lots of nice people. It will be hard to find a church that has a snack downstairs every Sunday and lunch once a month.”

PMC was a church that loved to sing. They put on concerts at the William Glesby Centre for performing arts, had an active puppet ministry, started and assisted in managing the Portage MCC Thrift Shop and the local Habitat for Humanity chapter. The church sponsored three couples from Thailand and Laos. Regular book studies and Bible studies during the week were very significant for many.

Worship was always followed by a time of fellowship over coffee. “The closeness, the family atmosphere and frequent socializing made it feel like family to us,” said Grace Loeppky who has attended since 1981.

PMC’s membership peaked at about 40, said Peters. The church had a unique practice of renewing membership every year. A membership book spans the years from 1980, when the practice began, to 2011 with columns for adherents or participants including children and columns for baptized members to sign their names. Every year on Commitment Sunday, usually in May, “we wrote our names down committing ourselves to PMC, to our Heavenly Father, and to work together,” explained Peters.

In 1977 three couples found themselves longing for a church where they could give expression to their Anabaptist faith. They sent a letter to others they knew who might share their desire for an Anabaptist faith community. “Out of that mailing we were amazed at how many people showed up,” said Tony Peters. “We were bold back then. We inquired whether we could rent a Presbyterian church that was not being used. When that church was sold we moved to a Seventh Day Adventist Church that worshipped on Saturdays and so they allowed us to worship there on Sundays.” Eventually they bought the old Alliance Church and have remained there ever since.

Henry Neufeld, a founding member who now lives in B.C., recalls the church grew rapidly in its early years. “There was a strong sense of commitment and a lot of involvement from a lot of people. There was lots of serious discussion and there was lots of laughter.”

Leadership was shared in the early years. “We never had trouble filling the pulpit,” said Tony.

“One of the things that helped us a lot was the Charleswood connection,” explained Astrid. For several years Charleswood Mennonite Church sent speakers on a regular basis. That was followed by a series of part-time pastors who commuted from Winnipeg. Most recently, Karen Schellenberg was their first pastor to live in Portage. She served the congregation on a part-time basis for eight years until 2010.

The congregation is down to a handful of people, mostly seniors. “A lot of us are starting to feel like our shift is over, but when there are only five people on council and everyone’s term is up for renewal and you realize if they don’t renew there won’t be a council, the decision becomes clear,” said Tony.

“It is very hard,” said Grace Loeppky, “but we are trying to be realistic.” They are planning a closing service on September 16. 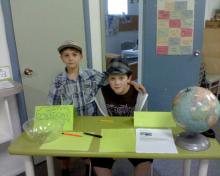 Derek (7) and Michael (10) Thiessen, comprising the entire Sunday School, began a goat project in June, just weeks before the last worship service of Portage Mennonite Church. They are not sure where will they will go to church now that it is closing. 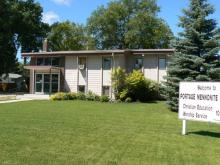