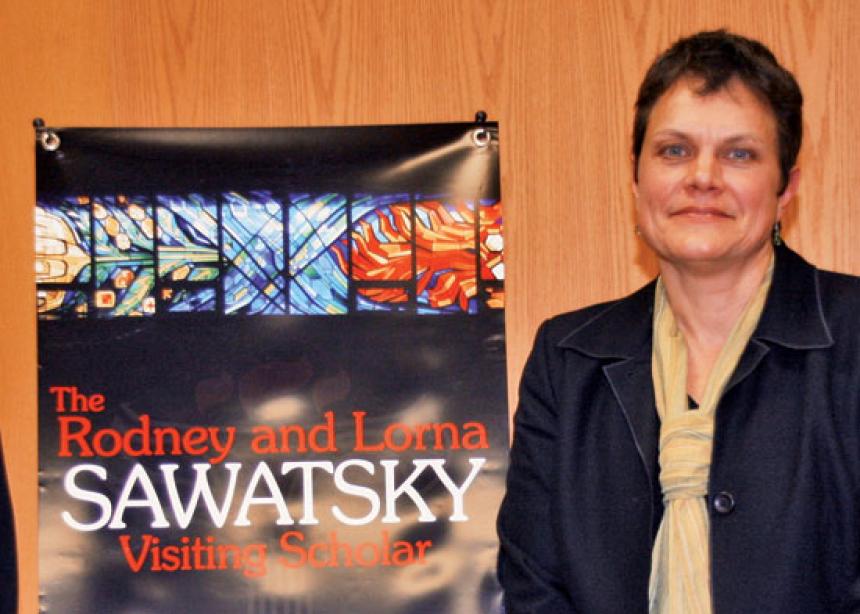 Ancestral worship for Mennonite writers is a great temptation, Julia Spicher Kasdorf told a faculty forum at Conrad Grebel University College on Feb. 17 as part of the award-winning Mennonite poet’s three-day presence on campus as a visiting scholar sponsored by the Rod and Lorna Sawatsky Fund.

Spicher Kasdorf, currently teaching creative writing and women’s studies at Pennsylvania State University, read several of her poems to a small group of faculty and community participants. The only American writer in a nine-week series celebrating 50 years of Mennonite writing in North America, she identified “ethnic identity” as an author’s dilemma in sharing his or her insights with a wider audience. “What do we do with our shared knowledge, our quarrel with the past, our deeply ingrained ethos, that so intrigues readers with ‘other ethnicities’?” she asked the group.

Unlike in Canada, Spicher Kasdorf observed that Mennonite writing in the U.S. only burst onto the national scene in the early 1990s, much later than her northern neighbour, with the publication of her first collection called Sleeping Preacher, along with the works of Jeff Gundy and Jean Janzen. “Mennonite poets emerged all at once,” she said, triggering a sort of national conversation about “who we are and what we do.”

She differs with her critics, however, who point to several of her poems as “the signature Mennonite poem,” such as “What I Learned from my Mother,” a work that she insists has universal themes, rather than ethnic Mennonite ones. “My goodness,” she said as proof of broader identities, “this poem was read publicly by Hollywood actress Meryl Streep, became a guide for child care by baby boomer parents and was considered a positive view of women’s care.”

Mennonites, she said, are a blood tribe held together by ethnic foods and religious customs, but “we are much more than that.” She is increasingly suspicious of the “Mennonite” label in Mennonite writing because it tends to place national identifiers in a post-national world, saying, “Our future writers will carry many passports who have given up their sectarian identity.”

In a follow-up discussion, Tom Yoder Neufeld, who attends First Mennonite Church, Kitchener, which has a growing immigrant population speaking “13 different languages,” wondered how this Mennonite identity of mixed perceptions comes across to those of non-Mennonite ethnicity attracted to the Anabaptist faith. Spicher Kasdorf responded bluntly: “That’s a way of shaming our Mennonite artists!” This engendered a discussion focused on just how this is playing out in a “post-national world.”

Classical musical conductor and former CBC Radio host Howard Dyck, observing the burgeoning growth of Mennonites in such places as India and Africa, asked if Spicher Kasdorf knew of any budding writers there. “I don’t really know,” she said, but agreed that it is an important question, speculating that this ethnicity will likely go global in the near future. Miriam Maust observed that Japanese poet Yorifume Yaguchi, a Buddhist turned Christian and Mennonite, embraces the peace stance in his poetry.

Grebel music prof Carol Weaver wondered about the next generation of writers, observing that Mennonites are now in “crisis mode” with their identity, and asked how young writers will handle this identity issue. “They are far more comfortable with it than their elders,” replied Spicher Kasdorf, from her experience of speaking with students from Mennonite campuses in both countries. “[Students] have picked up the justice part of our belief and are practising it every day,” she said. “They have no difficulty with it.”

Paul Tiessen of Wilfrid Laurier University observed that, in Canada the public’s intrigue with Mennonite ethnicity has long passed. In the 1970s and ’80s, he said that when he and his wife Hildi were developing the arts and writing for the wider world, their peers in academia and mainstream religions were lamenting how they had no ethnicity to celebrate and draw from. Governments that were into multiculturalism at many levels were anxious to fund Mennonite art and writing for public consumption.

Twenty years later, he said that such interest had waned, with his non-Mennonite colleagues saying, “You are no longer ethnic, but have gone mainstream,” a phenomenon Rob Zacharias described as an “astute strategy” to meld Mennonite writing into “national writing.”

Spicher Kasdorf took great heart in this and concluded her presentation with a reading of “Bat Boy, Break a Leg,” a poem from her most recent anthology, Poetry in America, described by critic Jeff Gundy, whom she called her “sibling rival,” as a “peaceable encounter with the ‘other.’ ” 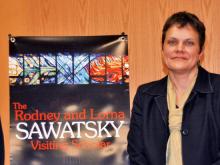