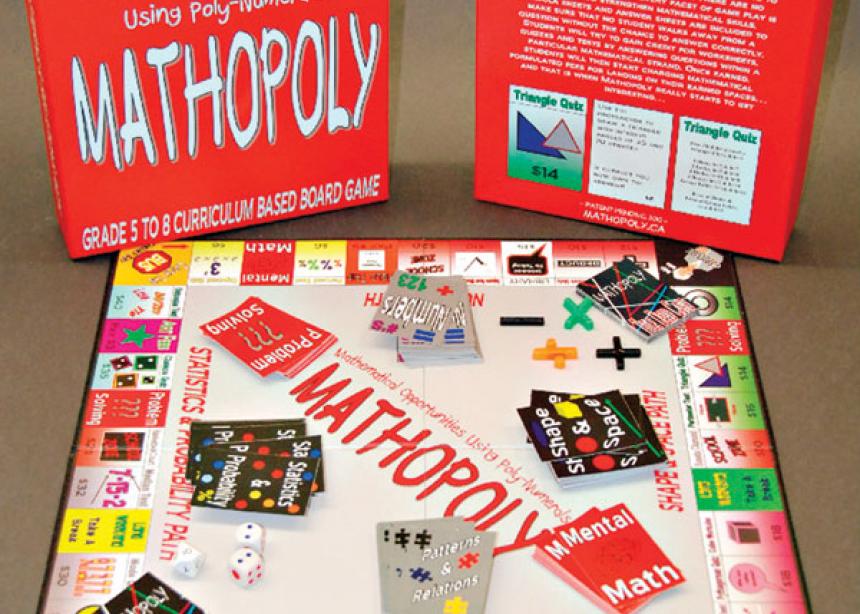 Teaching may not be an unusual career, but Willi Penner has made a unique contribution to the field. Penner is the creator of Mathopoly, a curriculum-based math learning tool. The game is gaining the attention of educators and parents, and last October it was featured on the CBC’s Dragon’s Den, a TV show that gives entrepreneurs a chance to pitch their product to potential investors.

“I was a terrible math student,” admits Penner, who graduated from Westgate Mennonite Collegiate, Winnipeg, Man., and has a bachelor’s degree in education with majors in science and math from Brandon University, Man.

“I don’t think it was because I didn’t have the aptitude for it,” he says. “I think it was just because I felt disengaged, I wasn’t really inspired. No offence to my teachers, the text book wasn’t engaging. . . . It [had] a repetitive nature. I scraped along, really just literally scraped along, so my taste for math was not something I felt good about going into university.”

His inspiration for Mathopoly came during his last year of study at Brandon.

“We were given an assignment worth 10 percent of our mark,” he says. “It was to find diversity in teaching math. A friend and I got together and came up with a game. We went about it slowly and got a working prototype, and teachers and fellow students really fell for it.”

Penner took the prototype to his first teaching job.

“That’s how I got the job,” he says. “And it kept on growing and growing.

Penner describes Mathopoly as “a learning tool and it’s disguised as a game. It’s to get students engaged and to be able to do it themselves. And that’s the feedback I’ve had from teachers is that they can literally be a ‘fly on the wall’ and watch the kids play this game.

“Because the things I’ve added to it over time—like formula sheets and answer sheets—the kids are never going away from an answer without knowing what was correct and what wasn’t,” he says. “I really wanted to engage students and keep them motivated when they are learning this math, and to not really know they are learning math at the same time. That’s the premise of it.”

Of his experience on Dragon’s Den, when one of the “dragons” offered him $150,000 to “burn the game,” Penner responds, “No offence to them, I don’t think they understood it. When I left, of course I was a bit dejected, . . . but when I came home I didn’t hang my head down. I knew I had a great tool.”

He then met what he calls “sort of angel investors,” and put in some of his own money to develop the game, with a primary focus on schools and home schooling.

“It’s Grade 5 to 8 curriculum, so I’m geared toward schools, teachers, home-schoolers, parents, anybody who’s interested in their child’s education is what it comes down to,” Penner says.

Mathopoly went on the market in January.

“Right now it’s word of mouth,” he says. “I’ll tell you a funny story. Through a contact, I met a girl, she was in about Grade 6 or 7, and she was sort of a ‘math ambassador.’ I met up with her and her teacher and her mother at a Starbucks to talk about math. . . . I just by chance brought a game with me and we ending up playing in Starbucks for an hour, the four of us. It was so spur of the moment. It was so funny to me. The mom bought a bunch of copies right there. . . . I was giddy. I thought this is exactly why I made it. For the mom to be just as engaged as the daughter. This is worth it.”

Penner sees Mathopoly as more than just a board game, however.

“I would love for it to go digital,” he says. “That’s really my goal, so eventually a student at Menno Simons could play a student in Manitoba, or a class versus a class. That’s really what I’d love to get out of this, a digital version available over the Internet.”

Mathopoly is available in Calgary Chapters bookstores and online at mathopoly.ca.

“If you’re looking at a different avenue of getting math across, it’s something worth checking out,” enthuses the teacher-cum-entrepreneur. 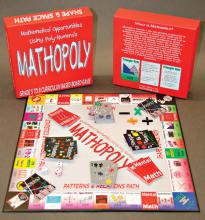 Hi Yelena. Willi Penner's game, Mathopoly, is based on grade 5-8 curriculum. Check out his website for more information and an idea of how the game works.