‘A place that gives life’ 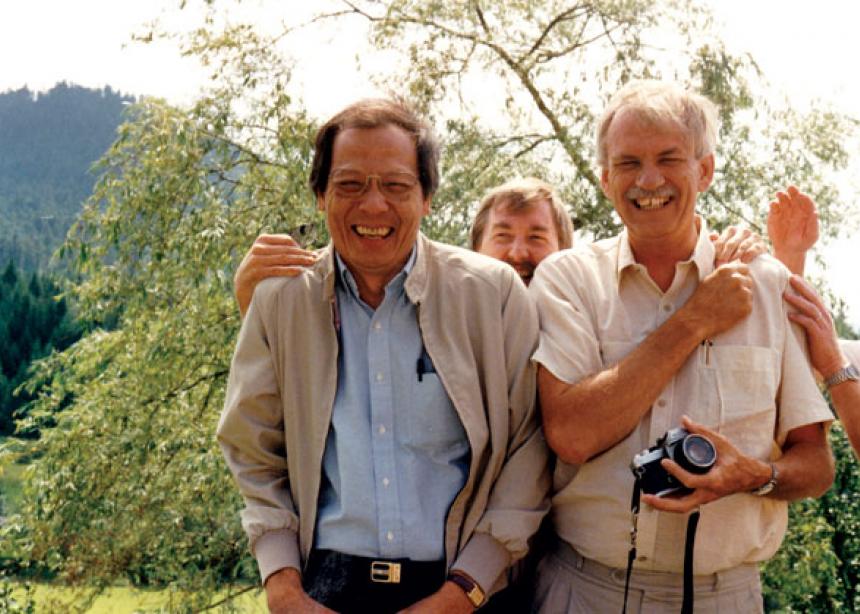 “I was working on my dissertation, and I looked up and noticed a book by one of my professors on a shelf,” he says. “I pulled it down. It was dusty, and no one had ever checked it out. I suddenly realized that I was poised to write those kinds of books!”

Miller was finishing his doctorate in New Testament and was under consideration for a graduate-level teaching position in that field in the Protestant faculty at the University of Strasbourg. But something unexpected had come his way. The European Mennonite churches had together nominated him to be MWC’s executive secretary.

Miller and his wife Eleanor had worked with international students in Paris for European Mennonites and the Mennonite Board of Missions of North America, and in peace activities and inter-church relations for Mennonite Central Committee.

“I was working internationally and ecumenically, and my interest and experience in those areas was growing,” he says. “But did Mennonite World Conference—which most people understood to be those spectacular, once-every-six-year assemblies—fit my gifts and personality?

“My growing interest in MWC surprised people who knew me, including Eleanor! I sensed, however, that this might be a call to receive life through the global church.”

Miller became executive secretary during the closing event of the Winnipeg MWC assembly in 1990. The setting, music and ceremony had a touch of the spectacular, but Miller and the organization faced a frightening deficit as the week-long meeting ended.

“While MWC needed to deal with that reality, and we were able to, I never felt pressure to ‘succeed’ by building a large institution,” Miller reflects. “Instead, the focus was on helping this little boat—MWC—to catch the wind in its sails. The wind was clearly blowing, so the task was to adjust the sails to catch the wind.”

Miller senses that he has served Anabaptists around the world during a time of fundamental change over the past two decades. “My primary calling has been to amplify the voice of the Global South and its rising,” he says. “That voice, that capacity, needs more room and opportunity. I’ve often felt like John the Baptist, that something greater is coming.”

In January 1997, the first MWC assembly under Miller’s leadership took place in central Kolkata, India, inside tents on a sprawling school campus. The daring move stood in stark contrast to the previous assembly, which had been held in a well-appointed convention centre in Winnipeg.

“We had potential disasters everywhere,” Miller reflects about the Kolkata event. “Before I joined MWC, groundwork had been laid for the assembly to go to the diplomatic, aristocratic quarter of New Delhi. That location didn’t seem right to me.

“There was no model for holding a global assembly in Kolkata. It was countercultural. No other world communion had ever gone to Kolkata for its world gathering, so we had to create ours from scratch.

“Would people come? Could we pull off such a complex event there? Would it work financially? Would attendees be overwhelmed by the city itself?”

The national Indian churches that are members of MWC, along with national MWC staff, worked diligently—and with extraordinary perseverance—to host a world gathering of some 4,500 Mennonites and Brethren in Christ.

The bold decision and the stark contrast to past gatherings cleared a path for new aspects to be born as part of the assembly program. For the first time, there was a Global Church Village, a venue where delegates learned about the life of

churches in each continental region through food and cultural displays, and Assembly Gathered/Assembly Scattered events. In fact, these elements worked so well that they have continued in subsequent MWC assemblies.

“My surprise,” says Miller now, “is that no part of the Kolkata gathering ended in disaster. And because we had a good, positive experience, the event allowed Mennonite World Conference to turn a corner. It permitted the reorientation of MWC. I view it as a watershed make-or-break moment.”

The second assembly that Miller and his team shepherded was held in Bulawayo, Zimbabwe. Despite the country’s tremulously uncertain political, economic and food situations, the Brethren in Christ churches there provided extraordinary hospitality.

“Zimbabwe raised many of the same questions as Kolkata did,” Miller says. “Was it courageous or stupid to bring thousands of people there? But we had survived Kolkata, so even a modest failure in Zimbabwe wouldn’t have wrecked MWC.”

‘The church is both local and global’

Perhaps one of Miller’s greatest gifts to Mennonites and Brethren in Christ around the world has been his belief, and consequent actions, that the church is never just the local congregation, denomination or world body.

“The church is both local and global,” according to Miller. “It always has been and will always be. The special foundational task for MWC during these years has been to recover this New Testament view of the church. MWC needs to continue to make the global church real, to have it be seen, felt, touched, experienced.”

Gradually but persistently, Miller created ways to make this daily reality apparent. He helped to conceive of, and then create, the Global Church Sharing Fund, to which MWC member churches in the South apply for and receive financial support for their ministries as an expression of “jubilee” redistribution.

He guided the development of MWC’s statement of “Shared Convictions,” brief paragraphs documenting the core beliefs that the scattered Anabaptist churches and fellowships claim.

He has overseen the establishment of four commissions under the MWC General Council, each composed of members from the five continental regions, and pledged to fostering greater faithfulness by MWC member churches and their support of each other. (The four are the Deacons, Faith and Life, Mission, and Peace commissions.)

“At the same time,” he states emphatically, “the global church without the local church is not fully the church either. One without the other is heresy.”

Miller quickly moves to another theme that has characterized his leadership of MWC. “Even as we’ve begun to grasp the wonder of what it means to belong to our particular global family of faith, we are still a fragment by ourselves,” he says. “What is emerging is our increasing connectedness to other Christian world communions. We must see other global Christian churches as part of the whole church universal to which we also belong. We must live within this whole church, or we won’t live.

“While the giftedness of our Anabaptist community is being acknowledged by other world communions, the limitedness of it is also. The same is true of these other churches. Together, we’re recognizing our need of each other,” says Miller.

The struggles and the gifts

What difficulties did Miller experience as MWC general secretary?

“I’ve lived a constant series of goodbyes,” he says. “And while I’ve had so many points of contact, they are almost all distant.”

The MWC office in Strasbourg, where Miller is based, includes an average of only four administrative staff. All other staff and executive leadership are scattered around the world.

“The work is sometimes heavy and lonely,” he reflects. “But it is always invigorating! This has been a place of life for me, a gift of life.”

What anxieties does Miller have for MWC, which he acknowledges is an organization with uncertainty, heaviness and fragility?

“We are in a historic transition moment,” offers Miller. “There is decline in the churches of the North. But when you belong to a global body of faith, there’s always a part that’s experiencing new life and a vision that can draw all of us forward. The centre of gravity of the global church has shifted south. We must continue to adjust our sails accordingly to catch this new wind of the Spirit.

“With gratitude and joy, I imagine César García [MWC’s new general secretary, who assumed the role on Jan. 1], and those with him, picking up the vision for the future. I look forward to seeing how they incarnate it,” Miller says. “My experience of working with César has been among my top joys, among my very best MWC experiences. He and his team will live into the future from their own worlds and contexts, going forward with the Spirit. It is for them to imagine.”

On Aug. 1, 2011, the officers of MWC, plus a few staff and representatives of the four North American MWC member churches, gathered around a big table in Grantham, Pa. It was the kick-off for organizing the planning of Assembly 16, to be held in 2015 in Harrisburg, Pa.

Danisa Ndlovu, MWC president, opened the meeting with a devotional, acknowledging two reasons for anxiety that day: the start of planning for a new assembly, and César García’s first official day as general secretary-elect.

When it was Miller’s turn to address the group, he said, “I can attest, after 22 years with Mennonite World Conference, that it is not a place of anxiety, but a place that gives life!”

Phyllis Pellman Good, Lancaster, Pa., is a communications consultant with Mennonite World Conference. Meetinghouse is a consortium of Mennonite and Brethren in Christ publications. 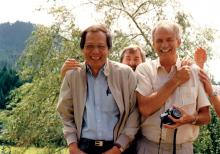 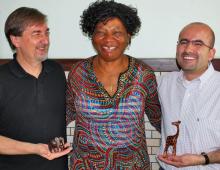