‘People can do this’ 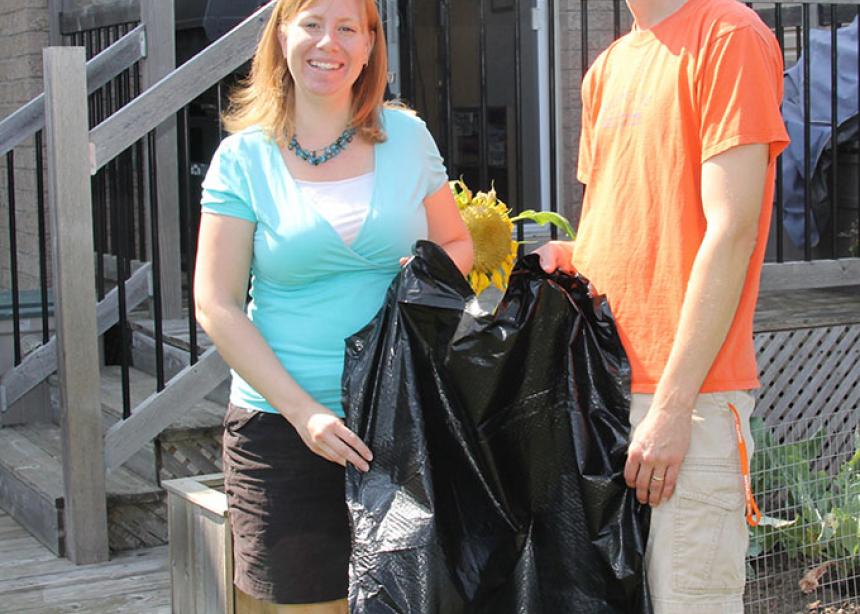 <p>Stacey and Matthew Vandermeer stand in their backyard with a 77-litre garbage bag like the one they filled from July 1, 2013 to June 30 of this year. (Photo by Dave Rogalsky)</p>

Friends would apologize for throwing things out when they visited. People posted nasty notes on the CBC and CTV websites in response to “the challenge.”

But Matthew and Stacey Vandermeer of Breslau Mennonite Church on the eastern edge of Kitchener were not doing this to shame anyone or to seem holier-than-thou. Instead, they were trying to reach the goal they had set from themselves and their two children to produce only one 77-litre bag of garbage from July 1, 2013, to June 30 of this year.

“There were no organics in the bag,” Stacey would reply. Organics went into the weekly green bin, “kraft” paper bags for yard waste or the backyard composter. What went into the garbage bag was packaging, plastic foam, tooth brushes and toothpaste tubes, vinyl, plastic, firm vegetable bags, broken toys, “holey” socks and dental floss. They had saved a large bag of plastic film that Waterloo Region did not recycle and that would have either been garbage or sent to another municipality for recycling had the Region not changed the rules in early 2014.

Hamburger was bought from a butcher, who wrapped it in butcher paper—that went into the green bin—instead of the grocery store, where the plastic wrap, blood sponge and plastic foam are all not recyclable. If they ate out and the material came home in the car, it had to be dealt with at home, but they didn’t bring home materials from other people’s homes, restaurants or events. Yogurt was bought in one-litre containers since the pull-off tops on single-serving sizes are not recyclable. Stacey learned how to make granola bars for Matthew’s lunch.

Their children, now 9 and 7, were in favour of the challenge. In stores they would ask about whether the packaging was recyclable or suitable for the green bin. Their grandfather had been gathering aluminium pop cans to sell as scrap to fund a church club for boys for years, so it was not uncommon to have pop cans get picked up on the way back from school or church. The children’s school was already focussing on “boomerang lunches,” meaning everything brought to school had to go home again. Teachers at school had them tell their fellow students about the challenge.

“As Christians, we are stewards of the earth,” says Stacey. “ ‘Subdue’ comes from a different time. We’re called on to take care of God’s creation.” This was her theology long before the family challenge took shape.

Matthew agrees. “We need to take care of what we have,” he says. “As humans, God has given us a brain to think. We can make a plastic fork: mine the oil, process it into plastic, form a fork and get it to the restaurant. Can’t we take a metal one and rinse it off?”

Ideally he’d like to see manufacturers take care of their products from start to disposal. He notes that Sweden has to import garbage. Its diversion has been so successful that the country needs more garbage than its citizens produce to run its incineration power plants.

“It can be done,” Matthew says of their successful challenge. “We wanted this to be something normal people could do.”

It takes time to sort, to plan meals, to not buy as much that goes straight into the garbage, but it can be done. The Vandermeers proved that. On the first week in July the family put out one 77-litre bag of garbage, their first in a year. And the bag weighed only 14.5 kilograms, well under the 23 kilograms allowed by Waterloo Region.

For more on stewardship of the Earth, see:

"A 'small protest' they call home" 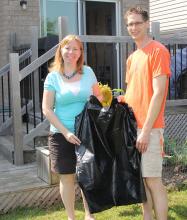 Stacey and Matthew Vandermeer stand in their backyard with a 77-litre garbage bag like the one they filled from July 1, 2013 to June 30 of this year. (Photo by Dave Rogalsky)