Peace walk focuses on the impact of oil

Walking and praying at Line 9 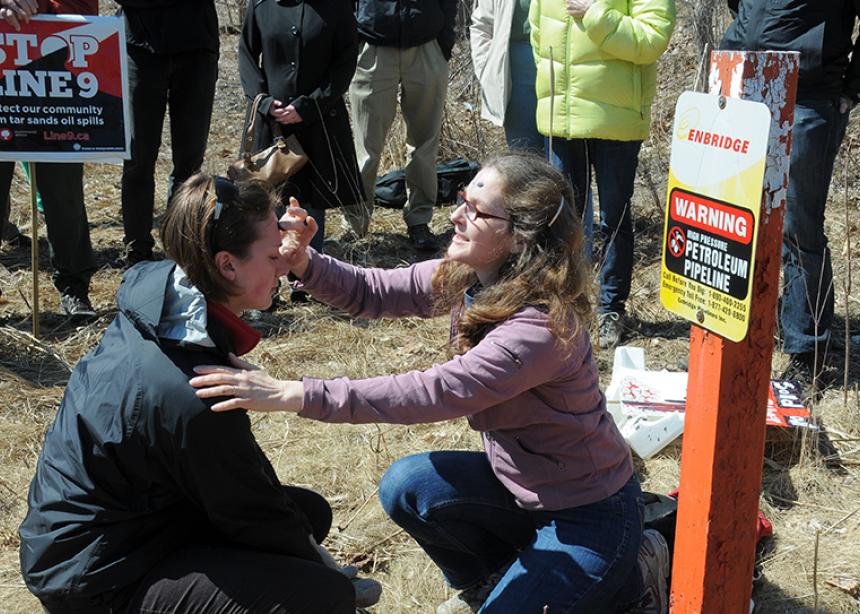 On a sunny morning, to the sound of Canada geese and in view of the flowing Grand River, a group of adults and children (and one dog) took part in a Holy Saturday peace walk.

Held on April 19, 2014, the event is part of the Holy Week tradition at Stirling Avenue Mennonite Church in Kitchener, Ont. This year’s event was organized by an ad hoc group of young and older adults and grew out of a recent study of the book, Buffalo Shout, Salmon Cry: Conversations on Creation, Land Justice, and Life Together, Steve Heinrichs, ed. (Herald Press, 2013). The walk became a way to express their concern about climate change and their desire to encourage care for the environment.

The group walked prayerfully to a spot right before the Enbridge Line 9 crosses the river. There they participated in a time of liturgy and singing. The National Energy Board has recently approved bitumen transport through the 38-year-old pipeline, coming from the West to refineries in the East.

“We liked the Holy Saturday idea, the idea that it was in the liminal space between death and resurrection, between grief and hope. That seemed like a good place for lament,” said Josie Winterfeld, Missions, Peace and Justice, and Outreach Worker for the Stirling congregation.

The goals of the walk were “to consider our own entanglement with oil, to acknowledge that we are connected to the Earth and to oil,” said Winterfeld. Further, the event provided a time to lament human dependence on oil, as participants were invited to receive on their foreheads a sign of the cross from a mixture of oil and dirt.

Winterfeld elaborated that the peace walk was an attempt to acknowledge “that our aboriginal brothers and sisters have been calling us to become better caretakers of the Earth.” Indigenous people have raised concerns specifically about how oil is being moved through the country.

Approximately 50 people participated in the walk. About 20 of them were from the Stirling congregation; others learned about the event through informal networks in the Kitchener-Waterloo area and through Facebook.

This was a moving experience for me and possibly the start of a movement to end the transport of this highly corrosive mixture through a sensitive area. The profits that these oil companies generate from the rape of only planet we have to live on is sinful. The majority of this money benefits about 1% of the population. We need to explore alternative means of power, eg. wind, water and sunlight.