“Being a peace witness is all-inclusive, it isn’t just one thing” 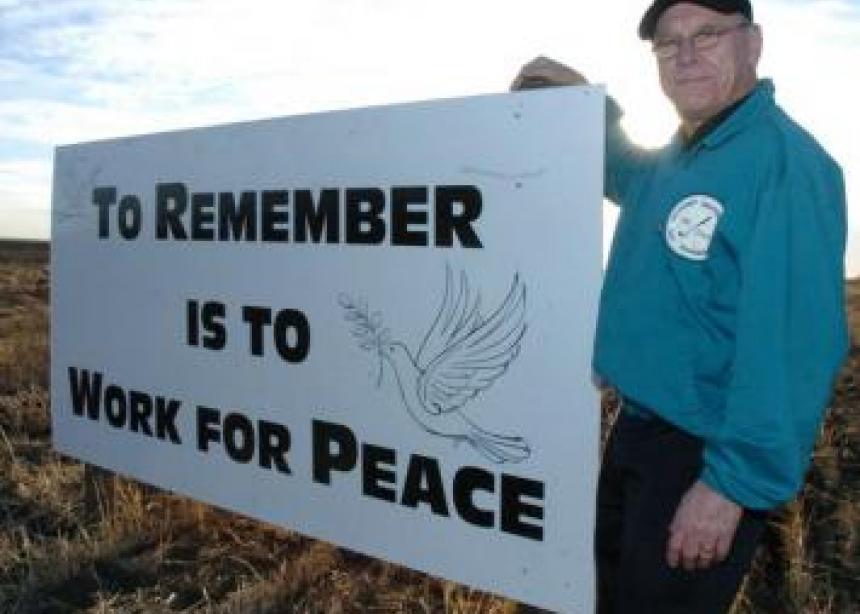 Jake Buhler is a man with a different pair of glasses. They reflect a steely determination to pursue peace and help others do the same.

“Peace is the lens through which we see everything,” he says.

With that lens, he notices things that others may not. It colors his whole worldview. And it helps him see the world with different eyes.

By nature a quiet man, Buhler looks for opportunities at every turn and on every level to live out his convictions as a peace activist.

Through his church, Osler Mennonite, Buhler has been able to initiate a number of peace projects and engage the congregation to also practice the peace vision. With Osler Mennonite, he has taken part in a community resistance to the building of a nuclear reactor in the late seventies. In recent years, his congregation supported a war resister from the States who went public with his discontent over the military. They sponsored a peace concert where a Hutterite choir from Manitoba was brought to the province to tell the stories of Hutterites who have suffered for refusing to fight.

He presented a paper during public hearings in Saskatchewan on whether on not the province would go nuclear. And in 2009, the Osler church brought a peace resolution to the floor during the MC Canada sessions in Saskatoon. He has offered a list of suggestions to help others work for peace including writing members of legislature.

In his simple yet convincing way, Buhler points out that his life experiences and early influences have helped him see with this unusual lens, citing examples like family members, early Anabaptist martyrs and the Prince of Peace, Jesus Christ.

During the 80s, from 1981 to 1987, Buhler worked in Thailand as a regional director for MCC. Following that experience, he spent the next 15 years in development work for the Canadian Embassy in Thailand and Vietnam. His experiences there cemented his already firm belief that war is wrong.

This special lens also helps him see some disturbing trends.

“In the last five years, since Harper began, militarism of Canada is increasing,” he says. He points to numerous examples to prove his point. Fire trucks, police cars and now, all government vehicles have stickers proclaiming support for the troops.

“Mennonites struggle with having to drive those,” he noted.

He also notices changes in the way November 11 is observed.

“The present government has turned Remembrance Day Services into active support for militarism,” Buhler points out. Children are targeted in schools and society in general sees militarism promoted in sports, advertisements, religion and local government.

“Militarism has pervaded our everyday life to the point where we don’t even notice it,” he says.

He suggests Canada has been strongly influenced by its southern neighbors.

“The US is a warrior culture. Canada is becoming like the Americans,” he says.

As Buhler offers suggestions to help others live for peace, he stresses the importance of living with integrity. A non-reactionary witness is also important.

“Your message has to be more than a protest,” he says, in effect cautioning against emotionalism. Some see his as a bold witness. He is not the quiet in the land.  After he put up a sign on his land stating a position for peace, people expressed admiration for his stand.

“I wish I had your courage,” they would tell him. Still it disturbs him that Mennonites don’t do more to resist the current thinking on militarism.

“We have a lot of lazy Mennonites,” he says. Buhler believes that large organizations like MCC and MC Canada are backing down from confronting the present trend out of fear of losing funding or constituency support.

Yet, the label of activist hardly seems to suit this quiet soul. He is hardworking, persistent and in it for the long haul. He is not angry but quietly determined to make this his life’s work. 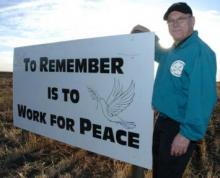