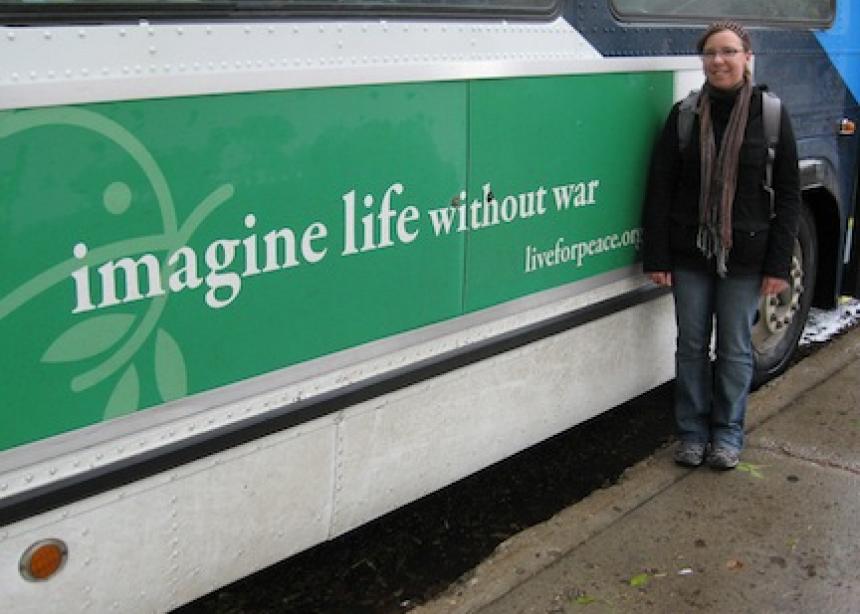 Stephanie Epp poses in front of a “peace bus.”

A grassroots response to Mennonite Church Canada’s Peace in the Public Square initiative is rolling through the streets of Saskatoon.

On September 6, five king boards – the exterior posters adorning the sides of city busses – made their debut carrying four different messages promoting peace and non-violence.  Messages like “the way things are is not the way things have to be,” “reuse love, reduce violence, recycle kindness,” and “imagine life without war,” were originally scheduled to circulate from Sept. 6 to Oct. 31, but an error on one of the signs prompted Rawlco, the transit company, to make corrections and extend the service until Nov. 30.

Stephanie Epp, chair of the ad hoc peace and justice committee that rallied congregations for their support, says the committee simply responded to Mennonite Church Canada’s challenge to give peace a public presence. This challenge was affirmed by delegates at Assembly 2009 along with the Live for Peace campaign and a pledge for each Mennonite Church Canada congregation to commit one act of peace each year for the next four years.

“We were on it right away,” Epp says. “We’ve been in conversation over the past year, figuring out a time frame and asking how we get churches involved. How do we prepare them?”

Epp had been invited to join the committee just over a year ago, after returning from a Christian Peacemakers Teams delegation to Palestine. Other committee members include Gordon Allaby, pastor of Osler Mennonite Church and a vital force behind the national church initiative, Berny Wiens (Herschel MC) and Melody Neufeld (Breath of Life MC, Saskatoon).

At the Mennonite Church Saskatchewan annual meeting in February, the ad hoc committee facilitated a round-table discussion about how they could work together to share messages of peace publicly, and compiled a list of delegate suggestions.  As a result, “we had almost 3 pages of single-spaced suggestions that we sent out to churches,” Epps says.

Although the committee Epp chairs falls loosely under the banner of Mennonite Church Saskatchewan, moderator Renata Klassen points out that committee members were not elected to their positions and they had no budget to work with. It was their passion for peace that drove the project, inspiring others to draw in support from their respective congregations.

“I have to say that without the support and encouragement and pushing of the ad hoc committee, the campaign probably wouldn’t have happened,” Klassen says. “We needed that catalyst.”

Will bus signs make a difference?

“I’ve heard people say that signs have never changed anyone’s mind,” Klassen muses, “But if advertising doesn’t make any difference, why do companies spend a large fortune on it?”

The bus signs are there to plant seeds – and like seeds, they are simply a beginning.

“It can’t stop with this. We have to be doing things to make us credible to say this,” Epp says. 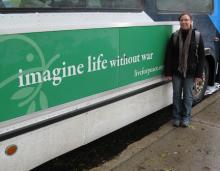 Stephanie Epp poses in front of a “peace bus.”