Number of Christians in China exploding

The government says 25 million, 18 million Protestants and six million Catholics. Independent estimates all agree this is a vast underestimate. A conservative figure is 60 million. There are already more Chinese at church on a Sunday than in the whole of Europe. 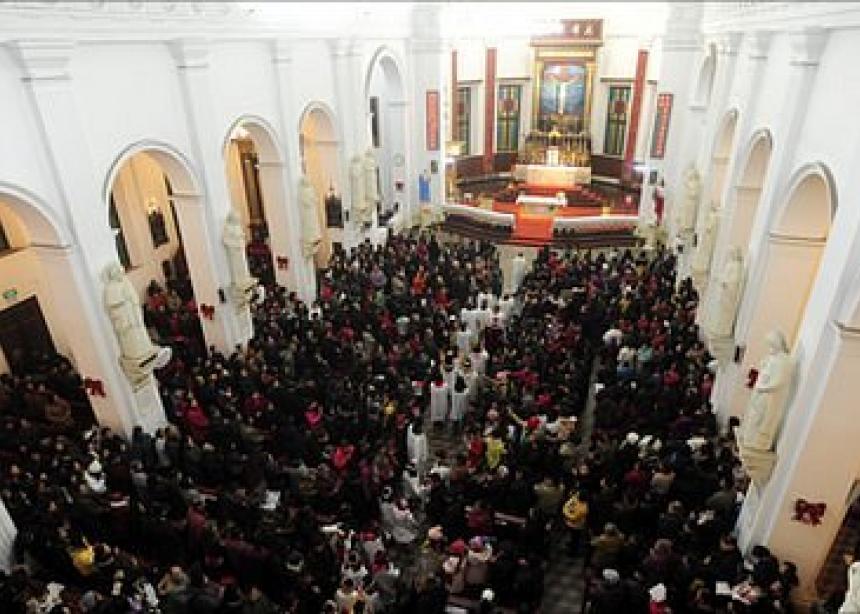 Many of China's churches are overflowing, as the number of Christians in the country multiplies. In the past, repression drove people to convert - is the cause now rampant capitalism?

It is impossible to say how many Christians there are in China today, but no-one denies the numbers are exploding.

The government says 25 million, 18 million Protestants and six million Catholics. Independent estimates all agree this is a vast underestimate. A conservative figure is 60 million. There are already more Chinese at church on a Sunday than in the whole of Europe.

The new converts can be found from peasants in the remote rural villages to the sophisticated young middle class in the booming cities.

There is a complexity in the structures of Chinese Christianity which is little understood in the West. To start with, Catholicism and Protestantism are designated by the state as two separate religions.

Mao, on the other hand, described religion as "poison", and the Cultural Revolution of the 1960s and 70s attempted to eradicate it. Driven underground, Christianity not only survived, but with its own Chinese martyrs, it grew in strength.

Since the 1980s, when religious belief was again permitted, the official Churches have gradually created more space for themselves.

They report to the State Administration for Religious Affairs. They are forbidden to take part in any religious activity outside their places of worship and sign up to the slogan, "Love the country - love your religion."

In return the Party promotes atheism in schools but undertakes "to protect and respect religion until such time as religion itself will disappear".House Churches

Protestants and Catholics are both divided into official and unofficial Churches.

The officially sanctioned Catholic Patriotic Association appoints its own bishops and is not allowed to have any dealings with the Vatican, though Catholics are allowed to recognise the spiritual authority of the Pope.

There is a larger Catholic underground church, supported by the Vatican. Inch by inch, the Vatican and the government have been moving towards accommodation. Most bishops are now recognised by both, with neither side admitting the greater sovereignty of the other.

Yet in the past few months, the Chinese government has again turned tough, ordaining its bishops in the teeth of opposition from the Vatican which has in turn excommunicated one of them.

Even so, it would be wrong simply to dismiss the official church as a sham.

In the mountains West of Beijing, I visited the village of Hou Sangyu where a Catholic Church has stood since the 14th Century.

The tough faith of these old people had withstood the Japanese invasion and the Cultural Revolution. The village clinic was run by nuns, one from Inner Mongolia, a Catholic stronghold.

It is from such villages that the Catholic Church recruits its young ordinands, to undertake training for the priesthood.

The official Protestant Church is growing faster than Catholicism.

On Easter morning, in downtown Beijing, I watched five services, each packed with over 1,500 worshippers. Sunday school was spilling on to the street.

However, these numbers are dwarfed by the unofficial "house churches", spreading across the country, at odds with the official Church which fears the house churches' fervour may provoke a backlash.

What the authorities consider non-negotiable is the house churches' refusal to acknowledge any official authority over their organisation.

The State fears the influence of zealous American evangelism and some of the House Church theology has those characteristics, but, in many other respects, it seems to be an indigenous Chinese movement - charismatic, energetic and young.

An educated young Christian described her church to me: "We have 50 young professionals in this church. Everyone is so busy working, you don't have time socialising, and even if you are socialising, you are putting on a fake face.

"But in church people feel warm, they feel welcome… they feel people really love them so they really want to join the community, a lot of people come for this."

A Chinese academic close to the government told me that the government would prefer to ignore the house churches, as unlike the Falun Gong they are not seen as a threat. But where a church oversteps the line, as happened in Beijing this year, taking its worship on to the streets, then the authorities will crack down.

In some areas the state has sought to enlist Christianity into its "big idea" of a "harmonious society" - the slogan that dominates Chinese public life. There has been official interest in the Western evangelical Alpha Marriage Course, because of alarm at the escalating divorce rate among young Chinese.

What must unsettle the authorities most is the reason why so many are turning to the churches.

I heard people talking again and again of a "spiritual crisis" in China - a phrase that has even been used by the Premier Wen Jiao Bao. The old have seen the old certainties of Marxism-Leninism transmute into the most visceral capitalist society on earth.

For the young, in the stampede to get rich, trust in institutions, between individuals, between the generations, is breaking down.

As one of China's most eminent philosophers of religion - Professor He Guanghu, at Renmin University in Beijing put it to me: "The worship of Mammon… has become many people's life purpose.

"I think it is very natural that many other people will not be satisfied... will seek some meaning for their lives so that when Christianity falls into their lives, they will seize it very tightly."

God in China, Christianity and Catholicism will be on BBC Radio 4 at 20:00 BSTonMonday, September 12, and afterwards at the above link.