Rosco Films creates modern look at volunteerism with The Volunteer 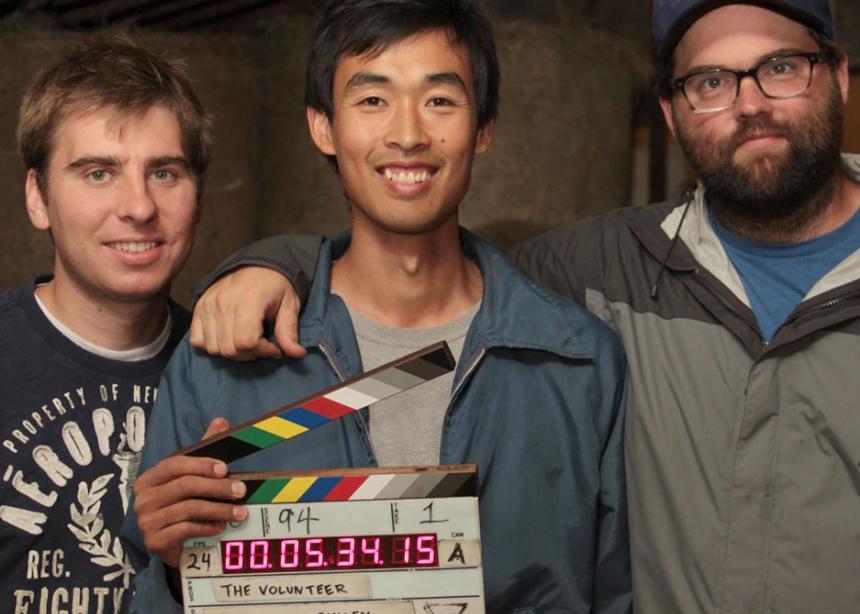 When filmmakers get around to showing their work to their family and community, it is usually a past project for them.

Such was the case for Rosco Films, whose principals—Jon Steckley, Ken Ogasawara and Trevor Hunsburger—grew up at Shantz Mennonite Church, Baden, Ont.

They showed The Volunteer at the Princess Twin Cinema in Waterloo last November to full houses, but had premiered it at the juried Cinéfest Sudbury International Film Festival in September, and had finished work on the project nearly a year earlier. The chance to show their film in Sudbury was a huge boost for them as they were there together with the royalty of Canadian filmmaking.

The Volunteer, an 84-minute feature, follows Ken, played by Ogasawara, who has recently moved into an unnamed community to work for an unnamed organization that works with youth. That’s his job. In his spare time, he “volunteers” around the community, trying to help various people by giving rides, moving grain and cleaning up on a farm, providing counsel of various kinds to various needy people, and on and on.

By the midpoint of the movie, the mood is overwhelmingly depressing, as Ken gets more and more exhausted and nothing seems to be helping anyone. In one harrowing scene, he pays for a woman to sleep off her binge in a motel, only to face her wrath the next day when she berates him for having to “walk home in my clubbing clothes and high heels.”

The mood lightens for a few minutes as we see Ken cared for by his new friends and co-workers, only to dive even deeper as one of the youths runs away.

Steckley, the director, says that watching his parents’ involvement in various volunteer agencies over the years made him want to make a film that looks at the upside of volunteerism, at the great cost to the volunteers, and the need for volunteers to think about their own needs as well.

Shooting the movie with volunteer actors—a few professionals but mostly amateurs—as well as with friends and family who did the filming and catering, among other jobs, kept the costs down. Funding came from a Waterloo Region Arts grant, an Indiegogo online fundraiser and monies Rosco—Ogasawara’s nickname for Steckley’s father, Ross—saved from paying jobs.

The movie was shot over 30 days in August 2013 in every township in Waterloo Region. When shooting started, they had a script but the dialogue and action felt wooden as the actors weren’t getting into their roles. So Steckley would describe the scene and what he wanted of it for the movie, instead, and the actors adlibbed their way through. What resulted feels like normal people doing normal things, with normal emotions.

Ogasawara noted with satisfaction that the Sunday morning after the Princess Twin shows there was great discussion about the nature of volunteering, its joys and costs at Shantz Mennonite.

Since The Volunteer’s debut, Rosco’s principals have completed a web-based series, several shorts that they will enter in festivals in 2015. They continue to do “paid” work for business and not-for-profits like Mennonite Central Committee Ontario and the Mennonite Foundation of Canada.

The Volunteer is available as an HD download and a DVD/Blu-ray pre-order from www.buy.thevolunteerfilm.com. 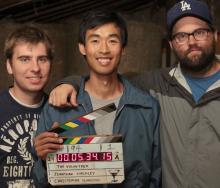 Ken Ogasawara, right, hangs out with a friend in The Volunteer, exchanging stories and working through bad relationships. (Photo courtesy of Rosco Films)

I would like you to meet some folks that may co-sponsor some film-making efforts under the social mental health advancement and awareness arena?
Any interest or time from your end?