No longer ‘sinful or strange’ to each other 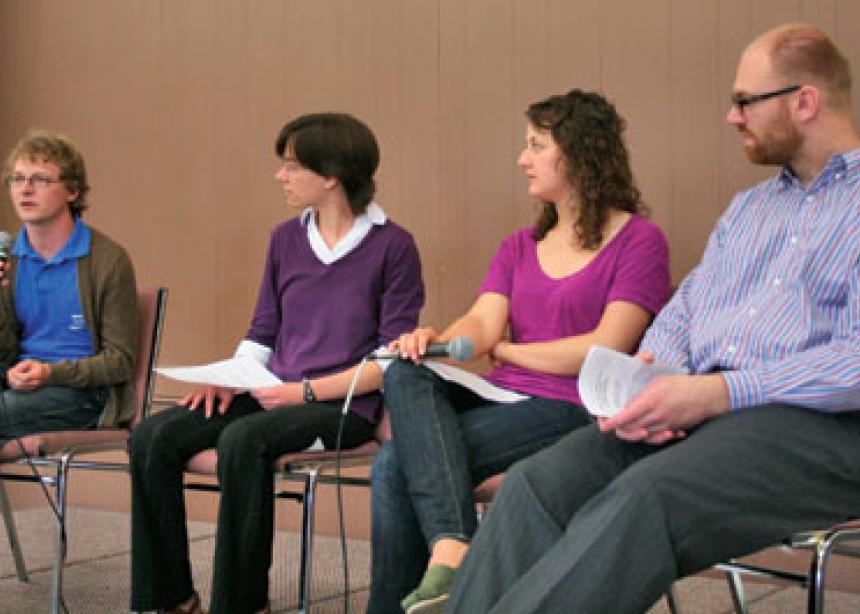 Sheila Klassen-Wiebe, associate professor of biblical and theological studies, believes that both faithfulness and sinfulness characterized the GCs (now Mennonite Church Canada) and the MBs at their division in 1860 and in the years following. The two conferences were faithful at their separation because they saw their differences and separation as “matters crucial to their faith,” she said.

However, their actions—that were probably done out of faith—were “marred by sinful influences, like mistrust, desire for power and harsh words,” she said, which tainted this likely positive split.

As a result, even today the older generations of MBs and GCs struggle with their identity, feelings of abandonment, and the ramifications of the distance and disapproval on both sides. This is because, between 60 and 80 years ago, MBs and GCs were excommunicated for marrying into each other’s conferences, and GC members also had to be rebaptized if they wanted to join an MB church.

Ten years after the amalgamation of Concord College, Mennonite Brethren Bible College and Canadian Mennonite Bible College to form CMU, there remains a strong GC dominance. In some people’s minds, the name “Canadian Mennonite University” gives the impression that it is mainly GC, although it was chosen to be inclusive of both conferences and to be descriptive of its geographical setting.

Irma Fast Dueck, an associate professor of practical theology, said “it felt like abandonment” when the colleges joined with an apparent GC emphasis.

Although intended to celebrate the two conferences and to facilitate learning about one another, “Celebrating 150 Years” also ended up being a time of revelation.

Dan Epp-Tiessen, an associate professor of the Bible and a faculty member that is involved in hiring new professors, said that, more often than not, instructors who apply are GCs. CMU would be very interested in hiring people from the MB tradition, he said; however, they tend not apply for positions. “I believe we would be stronger if we had more of an MB ethos. One culture still predominates here [at CMU],” he said.

While “Celebrating 150 Years” aimed at closing the MB-GC divide, it was made apparent that younger generations of MBs and GCs do not perceive such a great division among one another.

Four graduates spoke on a panel about their experiences with the two traditions: Michael Bueckert and Jessica Dyck from the GC tradition, and Andrea Dick and Tim Rempel from the MB tradition.

For Dick, before coming to CMU there was no divide among her GC and MB friends. “We were friends. We had relationships with Jesus Christ, and that was it,” she said.

After coming to CMU, Dyck said her GC background “did not affect the people I became friends with,” and any differences between the two conferences were made known in a joking manner.

Being at CMU taught Bueckert that any rivers of difference “are not too deep to cross,” he said.

According to Rempel, the divides are going away and the younger generations are celebrating “otherness.”

There may be some difference between MBs and the GCs, but there are also intersections. Where there are differences, “we can learn from one another,” CMU president Gerald Gerbrandt said.

I am 70 years old and was brought up in the "Mennonite Church" in southern Manitoba till I was 17 or so. Regular Sunday school and youth group and all those things that go along with this upbringing. With leaving home, university, moving to Ontario, marrying my high school sweetheart who attended the United Church, I have become an active United Church member. My question/situation regarding the differences between the "Conference" and "Brethren" is as follows: During a discussion with a pastor friend, he recognized that my name, Dyck, was of "Mennonite" origin and he asked whether I grew up in the Mennonite Church. I confirmed that that was the case. Then he asked "Brethren or Conference"? I admitted that I did not know the difference, and this surprised him. I said that I had not attended any Mennonite church since about 1965. My Mennonite Church experience had been as a child and then as an adolescent and teenager.

After reading your article above, I realized that I had never been taught that our Mennonite denomination was superior to any other, or that all others were inferior sinners. I think I would remember if I had been taught that. My intention now is not to waste time trying to discover the minutiae of the differences between Conference and Brethren or what kind of thinking precipitated the split. I'll spend my time living my Christian faith and serving others.