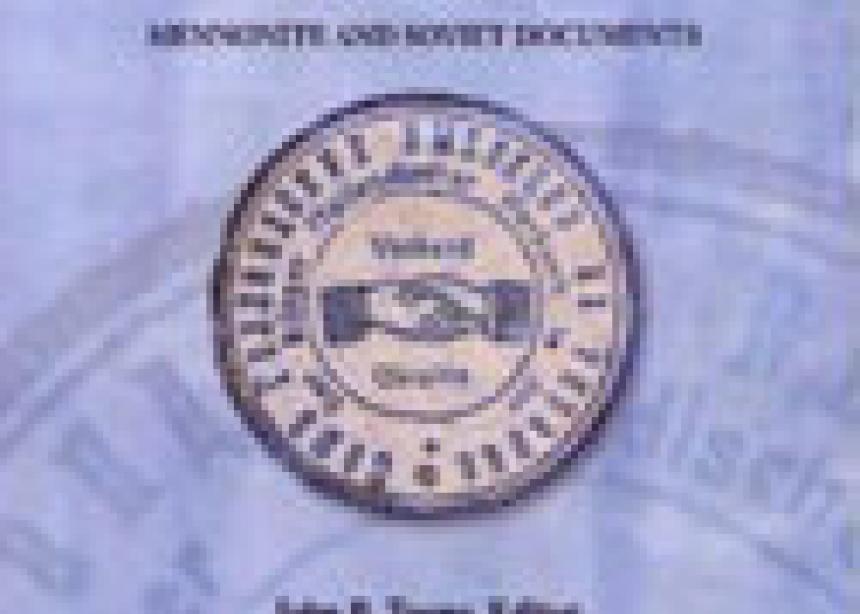 They discussed key issues including the future of their children’s education, the threat of military conscription, and the loss of farmland. They organized so they could speak to the new government with one voice, calling their new organization, “The All Russia Mennonite Congress.”

When seeking government registration, Soviet officials informed them that the new regime separated church and state. Since “Mennonite” signified a religion and represented counter-revolutionary thinking, it was unacceptable. As a compromise the group was called the “Union of Citizens of Dutch Lineage in Ukraine” (Der Buerger Hollandischer Herkunft).

This volume traces the work of the Union in the early to mid-1920s. It is rich compilation of documents from Ukrainian and Russian archives, as well as North American sources. Remarkably, the Union charter provided Mennonites with more power than any comparable group in Russia and was allowed to function with no Communist member on its Board. The Soviets wanted to integrate the Union with the Soviet co-operative system, but the Mennonite constantly resisted. The Union was seen, not inaccurately, as opposing Sovietization.

Initially I approached this book with some skepticism, but I was fascinated by the original documents with intriguing details about those years. Primary sources are fundamental to historians and these documents, enhanced by introductory essays in each section by the editors, are rich in detail and new insights. For instance the Mennonite Congress meeting in 1918 has lengthy debates about socialism and Christianity. “B.H. Unruh explains that Christianity has no direct relationship with any economic system, either socialist or capitalist.” (p. 29)

The Mennonite Congress was concerned about education; teachers should receive an adequate salary with periodic wage increases and leave for further studies. There is a debate about whether arithmetic should be taught in Russian or German language.

There are clear statements about non-resistance: “Mennonites see it as a holy duty to serve the fatherland, but without the shedding of blood.” (p.36)

B. B. Janz, the leader of the group, promotes non-resistance at a Congress meeting and is questioned: “What of the brothers who hold a different conviction?” (p.101) Janz demands that the group affirm non-resistance, or he will resign. Unanimously the group affirmed the principle and Janz remained as their leader, a crucial point in Ukrainian Mennonite history.

Feeding starving Mennonites and emigration became major issues. Janz saw “…the sallow pale faces, the farm boys running after a cat or a dog for a meal…” ( p.115) At one meal horse cutlets were served. Food reserves were seized or consumed, including seed grains.

Emigration was seen as an option because of starvation, limits on school instruction, land restrictions, military service, and the undermining of faith. Janz was persistent in seeking visas from officials in Moscow.

The barriers Janz faced were enormous: finding a country that would accept Mennonites; getting Soviet permission to leave; and the complex logistics of moving thousands of people. Janz’s pleas to North American Mennonites reflect his desperation when faced with pressure for action from the Mennonite colonies.

Janz’s efforts to get aid from North America and Europe intensified. In 1925 he wrote his American brothers: “Give these destitute people a new life.” (p. 492) And in a prophetic comment: “The days will come when the consequences of your action will appear much more important than now.” (p.492)

For five years Janz was, in effect, the Mennonite director of emigration. In constant demand from Mennonites seeking his advice, negotiating with authorities in Moscow, and extensive travel that kept him away from home.

As the Union nears its state-enforced end, Janz speculates about his future. “[E]verything seems dark as night. What pathway shall I walk? How shall I feed my family? What work will I have in the future?” (p.504)

This remarkable collection of original source material is a major contribution to the study of one of the darkest periods of Mennonite history. The Mennonites of that era faced bandits, a new and hostile government, loss of farmland, famine, a demanding 5-year plan, and a threat to an insular way of life. The documents describe, from various perspectives, the plight and the increasingly limited options available.

This book is an impressive tribute to B.B. Janz, a man of faith vision, and persistent diplomacy and his determined efforts to save his people.