New school year off to a resounding start at CMU 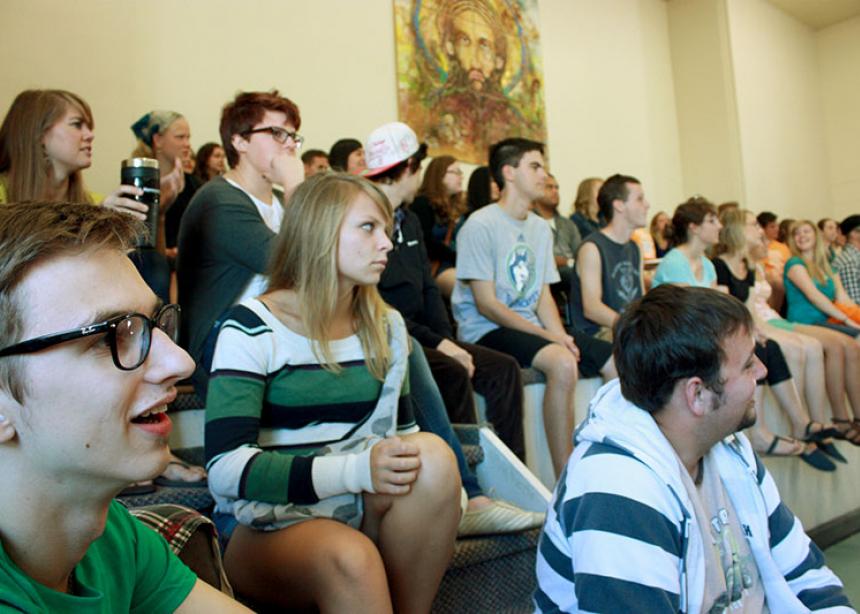 Increased enrollment, new courses, new program initiatives, and a massive building project come together to bring a palpable excitement in the halls, classrooms and offices of Canadian Mennonite University (CMU) in Winnipeg.

Registrations are continuing to be processed, but preliminary enrolment figures for the fall semester indicate that enrolment is up by 2.5 percent from last year and registrations for the graduate program have jumped by 15 percent. Overall, enrolment stands at 621.

“We have waiting lists for introductory biblical and theological studies courses, something we’ve not run into before,” says Kevin Kilbrei, director of communications and marketing. “This may be because of timetabling, but it has been interesting nonetheless.”

Among the slate of new courses this year are a few that come in response to student feedback. Aboriginal Psychology, Business in the European Union and a Business in Europe Study Tour are being introduced this year for the first time. Next spring, two new intensive courses will be offered: Continuity and Change in Anabaptism and Practices, and Practices, Rituals and Christian Imagination.

Two new programs have been introduced this year that open the doors of academia a little wider to those with an interest in learning. A very flexible 24-credit-hour certificate program is being offered for students of any age who would like to focus on a single theme, such as happiness or justice; a particular field of study, such as the Bible, theology, English or mathematics; or an array of interesting courses.

Some interesting sessional instructors have been invited in this year. Paula Havixbeck, city counsellor for CMU’s constituency, will be teaching public relations. Hal Wallbridge, head of clinical psychology at St. Boniface Hospital, is teaching psychology of personality; and Rachel Baerg, who works at the Winnipeg Art Gallery and was very involved in the recent 100 Masters Exhibit, is teaching the History of Art and Culture.

Cause for “a significant and excited buzz” at CMU is the new Face2Face series, says Kilbrei. The series of conversations with CMU faculty are open to all, and designed “to engage the community on a wide variety of current events and issues that affect Winnipeg and our world,” he says.

Adding to the excitement of the year is CMU’s building project. “Over $10 million of the $14 million has already been raised,” says Kilbrei.