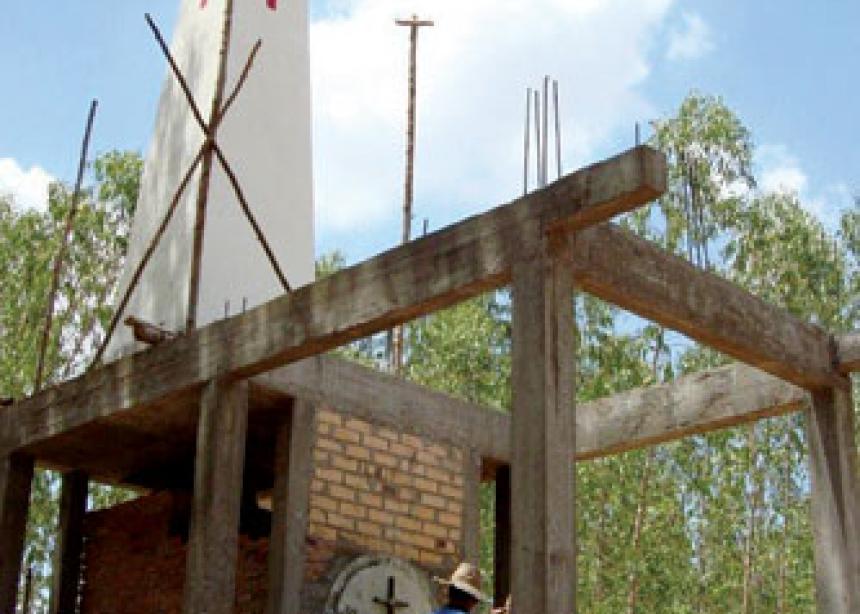 When Borabu’s first Christian crematorium is finished, it will finally bring peace of mind to members of Living Water Church in this region of Thailand who have been concerned about how they will honour their loved ones who pass away.

Christians in Thailand, a majority Buddhist nation where cremation is the preferred method of honouring the dead, have had to use Buddhist crematoriums for services. With financial help from Mennonite Church Canada and Bethesda Mennonite Church, Henderson, Neb., the crematorium, located on the grounds of Living Water Church, will enable Christians there to perform those ceremonies for fellow Christians.

Not having a crematorium at the church has prevented believers from performing Christian funeral ceremonies, and may even repel potential converts, says Pat Houmphan, whose wife Rad is a mission worker jointly supported by MC Canada and MC U.S.A.’s Mennonite Mission Network. Pat was also supported by both agencies until recently, when he resigned to focus on a new business and ministry initiative in the area. He continues to work closely with Living Water Church.

“If you want to become a Christian, then you get threats and mocking that ‘you won’t be allowed to use our [Buddhist] crematorium,’ ” Houmphan says. “Maybe this is a silly issue for the westerner to understand, but it has a psychological impact when they hear that. It discourages them from wanting to become Christians.”

Houmphan says that several years ago a woman who was a member of Living Water Church made it clear that upon her death she wanted a Christian service. However, her relative had to take her body to a crematorium at a Buddhist temple because the church lacked one. “We didn’t have a chance to do a Christian service in our church,” he explains. “We were able to do a very limited service in her village.”

Building of the crematorium began in February and was finished in June, according to Houmphan. The final stages involve the construction of a wall with individual compartments where urns can be placed. There will also be an area where loved ones can leave flowers.

Living Water Church contributed about 25 percent of the costs and the majority of the labour, but financial and labour support from Mennonites in North America was essential, Houmphan says. The Living Water Church council will oversee the crematorium’s operations, which will be available to non-Christians as well.

“We also want to use it for witnessing,” he says. “In the village where we are, they don’t have a Buddhist temple there. We want them to know that they can use our crematorium without problems. We want to show love and care, and that we respect the Buddhist faith. We want to have friends and have harmony in the community.”