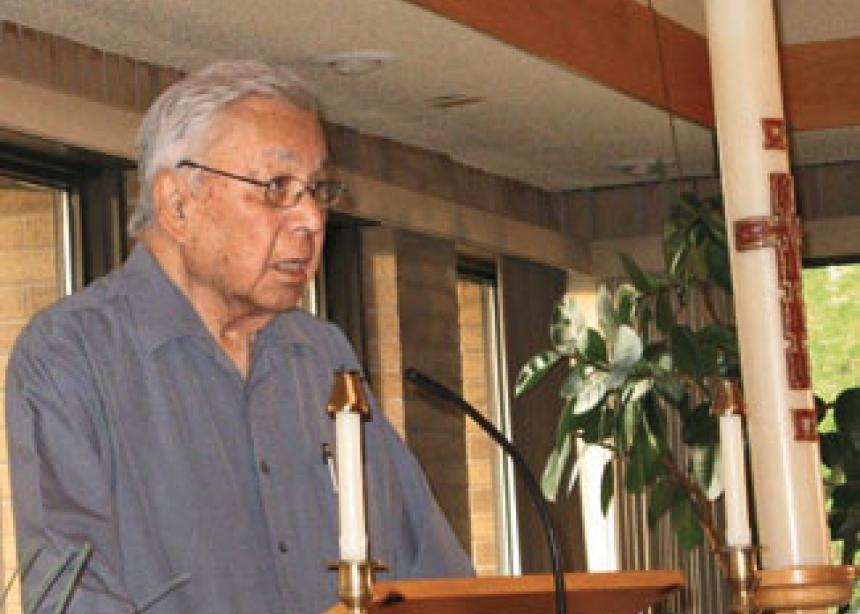 Stan Cuthand, 92, a member of Little Pine First Nation, worked for years on the draft of a Cree translation of all of the New Testament and 40 percent of the Old Testament. The newly released Gospel of Mark is based on his work.

A large group of educators, church workers and Cree speakers turned out last month to help celebrate the release of a new Cree translation of the New Testament Gospel of Mark. A united effort between Wycliffe Translators, the Canadian Bible Society and Saskatchewan Cree-speaking individuals, the translation built on the dedicated efforts of Reverend Stan Cuthand. The book is being sold along with a spoken version on CD, recorded by Delores Sand.

Oral traditions are strong in Cree communities and stories are often passed down using the spoken, rather than the printed, word.

According to Ruth Heeg of the Canadian Bible Society, the Cree translation was begun in the 1980s when Cuthand was hired by the society to begin the work. A complete translation of the Bible was accomplished in the 1860s, but was done in syllabics and is used mostly in northern communities. This new version, said Heeg, uses both syllabics and the written word.

Learning the Cree language was not encouraged in earlier generations due to the painful influence of residential schools. Aboriginal parents were told to speak English to their children because it would supposedly help them make it in the wider world, explained Sand. “That was so wrong,” said Sand, a member of the Muskeg Lake Cree Nation, during introductions for the evening event on behalf of the local working group of Cree translators.

Teresa Warkentin, youth pastor at Wildwood Mennonite Church, sits on the Mennonite Church Saskatchewan Ministries Commission. She said the commission has been looking closer at working with the First Nations communities in the province. “We’re trying to figure out as a commission how we can relate better to the aboriginal community,” she explained.

The commission has been learning from Mennonite Central Committee Saskatchewan’s Aboriginal Neighbours program and MC Canada Native Ministry co-directors Edith and Neill von Gunten, to determine what would be most helpful to the aboriginal community in Saskatchewan. The ministries commission was encouraged to attend the Cree translation release as a way of bridge-building to the First Nations community.

During the event, local translators spoke about defying real-life pressures to forget the Cree language, citing the example of family members who taught them the language even though they were told not to.

Ethel Ahenakew, who helped with the translation efforts, spoke on what this new book could mean for her people. “I have high hopes that the Bible in Cree will bring our people back to the church,” she said, adding, “The Bible is an effective guide to spiritual strength. In our Cree language, though, it is much more meaningful and deeper.”

Edith von Gunten agrees. “As we all know, language is not only the heart of a people, but it is the vehicle that embodies the cultural understandings of a people,” she said in an e-mail correspondence. “We have often wondered if things would be different today if more people had been able to read the Scriptures in their own language all these years. We have seen people’s eyes show much feeling as they finally understood what the Scripture passage was saying, as they heard it in their own language, and with their own background and cultural understandings.”

The packaged Book of Mark and accompanying CD will be available at the Canadian Bible Society website
(biblesociety.ca) and hopefully for sale directly in Saskatchewan. About 500 copies were created in the first press run. 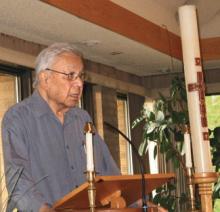 Stan Cuthand, 92, a member of Little Pine First Nation, worked for years on the draft of a Cree translation of all of the New Testament and 40 percent of the Old Testament. The newly released Gospel of Mark is based on his work.