New cookbook sells out before its official release

Three days before the official May 2 release date for Mennonite Girls Can Cook, Herald Press officials were already ordering a reprint. The cookbooks had arrived early from the printer, and workers at the Herald Press warehouses in Waterloo, Ont., and Scottdale, Pa., were filling 600 pre-orders and responding to nearly 3,000 new orders.

The title of the book comes from a comment made to a group of women of Russian-German Mennonite heritage in British Columbia: “You Mennonite girls sure can cook!”

First came a blog (mennonitegirlscancook.blogspot.com) that was started in 2008 by 10 women in their 50s and 60s. They shared thoughts, memories and recipes from their heritage. To date, their blog has attracted an astounding 2.4 million visitors.

“We never thought it would grow so big,” says Lovella Schellenberg, leader of the group, who lives with her husband on a farm in the coastal mountains near Abbotsford, B.C. “It has exceeded all our expectations.”

Their success caught the attention of Herald Press, whose editorial director Amy Gingerich contacted the women, who were open to the next step—a book deal.

“We decided that if we were supposed to publish a book, God would send us a publisher,” said Schellenberg. She and her group especially liked Herald Press’s connection with Mennonite Central Committee (MCC) through projects like the More-With-Less Cookbook.

The blog and book emphasize hospitality, rather than entertaining. The goal of the authors is to give a blessing to guests, rather than trying to impress them.

“No matter which way you look at it,” says Charlotte Penner, one of the authors, “wonderful things happen when people are given the opportunity to gather around the table—a chance to nurture and build relationships, fellowship and encourage one another, and create a place of refuge for those who have had a stressful day.”

Through their book, the authors are also honouring their Russian-German Mennonite past and the horrific story of famine and violence their grandparents endured during the aftermath of the Russian Revolution. To that end, their book royalties are being donated to MCC for the support of the Good Shepherd Shelter for orphans in Ukraine, where their ancestors lived. 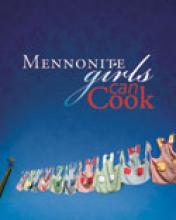 Greetings from Langley British Columbia.
I have a copy of the 1956 Altona Woman's Institute cookbook and the 1967 copy of the Canadian Mennonite cookbook. Neither of these cookbooks have a recipe for string bean soup that my mother perfected. (A similar version may be in the latest printing)

Boil ham into liters of water until tender. Add the vegetables and bring to a boil again. Add Salt to taste,a tablespoon of butter, several Bay leafs, parsley and thyme and simmer for 10 minutes.

My mother served this soup with a dollop of sour cream.

Where can I buy this cookbook? Thanks for any help, Kathy.

You can buy it through the Herald Press website or through Amazon.

We got ours from our local Ten Thousand Villages store.