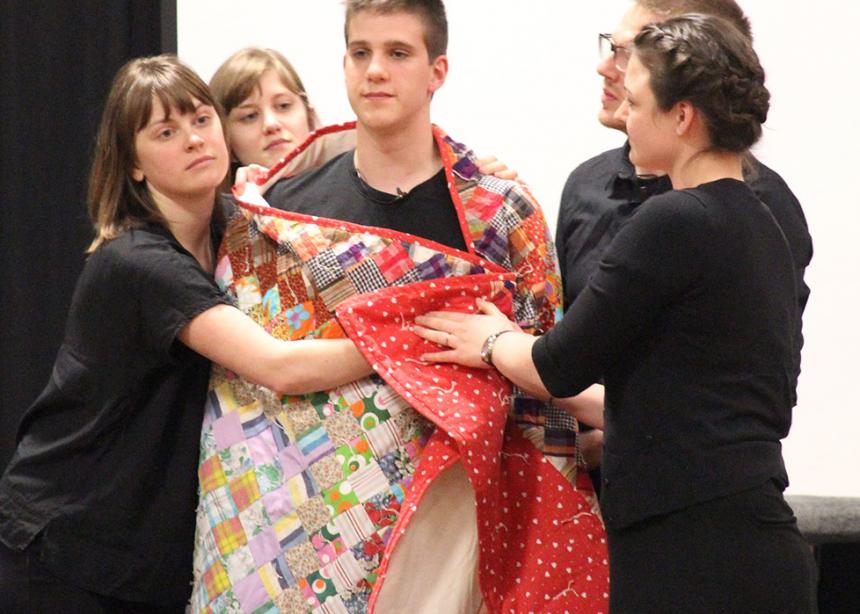 Fifty years ago—March 21, 1964—22 Waterloo County Mennonites got together and deposited a dollar each in a cash box to create a credit union to serve members of their faith community. From the beginning it was envisioned as an extension of mutual aid, a significant component of Mennonite self-identity, practice and theology.

As J. Winfield Fretz, a moving force in the founding of the Credit Union, wrote in 1947, which was quoted on the cover of its 50th-anniversary history, Quilting a Credit Union: Stories of Mutual Aid: “Mutual aid is a program designed to help set people on their own feet economically and spiritually, so that they can in turn become stronger members of the Christian body and bear their share of the load in church and community.”

Over the years, the Waterloo County Mennonite Credit Union became Mennonite Savings and Credit Union (MSCU), with offices in Aylmer, Elmira, Kitchener, Leamington, Milverton, Mount Forest, New Hamburg and Waterloo. The initial deposit has grown to more than $900 million in deposits and loans, and the 22 initial members now total more than 19,000.

The push for ethical investments spawned a mutual fund company since sold, but in which MSCU still holds an interest. Unlike banks, the Credit Union offers low- and zero-interest loans drawn from monies deposited at zero interest for the sake of mutual aid. In combination with congregations, MSCU works with those who are in financial straits to help them to stability, continuing the mutual aid focus of the original founders.

MSCU members are drawn from many Mennonite groups—from modern Mennonite Church Canada, Mennonite Brethren and Brethren in Christ, through Old Colony Mennonites, Old Order Mennonites and Old Order Amish. In 2010, MSCU, which until then included only members in Mennonite and Brethren congregations, was expanded to include anyone who would accept the seven statements of shared faith with which all member churches in Mennonite World Conference agree.

This year’s annual meeting, held April 8 in Kitchener, with a video link to Leamington, used video stories, a panel discussion and a drama by Theatre of the Beat to focus on the theme of “mutual aid.”

In his address, Brent Zorgdrager, chief executive officer, shared his belief that MSCU remains a necessary component of Mennonite and Brethren faith and life now and into the future. He addressed three questions:

Using stories from the present, he showed how mutual aid is alive in the work MSCU is doing, how it is effectively supporting small and large businesses, and, using his own children as examples, how it is educating further generations in the principles that caused MSCU to be founded in the first place.

In a conversation afterward, he was clear that not all is easy for MSCU to continue. Unlike many credit unions and all banks, MSCU still works on the spread between the interest rates charged on loans and that paid on deposits. It has resisted increasing income through higher service charges or by entering into other financial fields like insurance sales or financial markets.

Zorgdrager noted that some members come in with advertisements from other institutions offering lower loan rates, seeking MSCU to match those, which makes him wonder whether MSCU is only a financial institution or whether it is an extension of the ministry the members carry out in their congregations.

Drawing attention to MSCU’s recent investments in both the new 50 Kent Avenue building that houses the Kitchener branch, and the MSCU Centre for Peace Advancement in the new addition at Conrad Grebel University College, Waterloo, Zorgdrager believes that MSCU is far more than a financial institution.

That means it may not be competitive in every way with other financial institutions. “It isn’t about growth, it’s about relevance,” Zorgdrager is quoted in the history book. “What good are retained earnings and larger assets if our service isn’t improving and our members are burdened with larger debts, instead of living out faithful lives?” 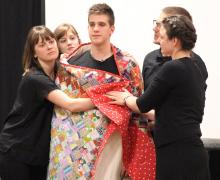