Mothers and daughters learn about HIV in Tanzania 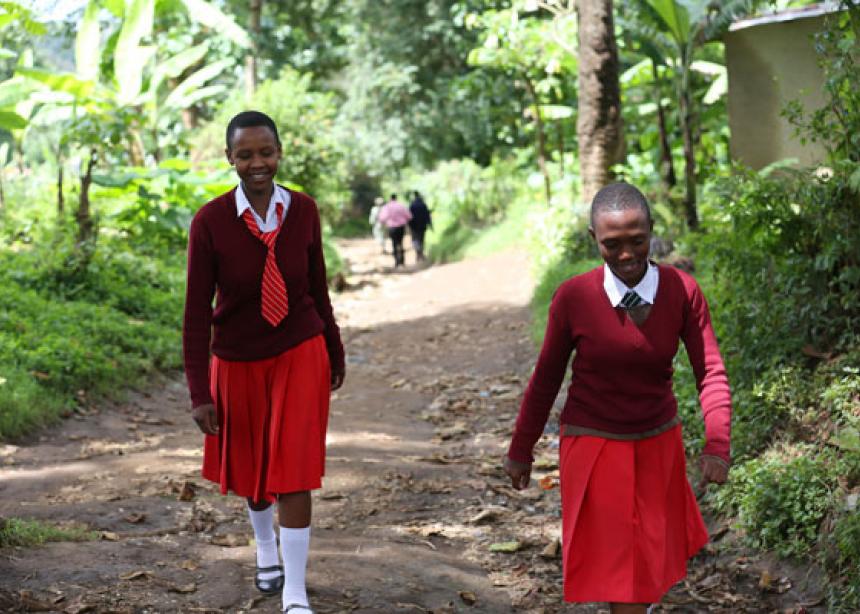 Dinah John (left) and Angel Mathew are part of an intergenerational team of women learning and sharing information about HIV and AIDS in Arusha, Tanzania.

Tears flow freely at Binti Mama (daughter/mother) gatherings as mothers and their teenage daughters talk openly about issues such as HIV and AIDS. Led by an intergenerational team of students, teachers and women, the gatherings provide a safe setting for listening and learning across generations.

“They dance, sing, eat and share stories of what happened to them,” says Salome Lally, a program coordinator at Mwangaza Education for Partnerships. “People cry a lot when others tell their stories.”

Female students in secondary schools represent one of the highest risk groups for new infections of HIV in Tanzania, says Lally.

In partnership with Mennonite Central Committee (MCC), Mwangaza trains and supports teams of women to lead seminars and be advocates for healthy lifestyles in their schools, churches and communities. Mwangaza is an educational partnership of Evangelical Lutheran Church congregations in Tanzania and the U.S. Each team consists of 12 women from the same community—six students and two teachers from a Lutheran secondary school and four women from a Lutheran congregation near the school.

The training deals with HIV and AIDS, violence against women, life skills, conflict resolution and how health information, cultural practices and behaviours relate to healthy lifestyles. Participants learn how to use art, music, drama and presentations to share this knowledge with others.

For some girls sexual behaviour is a way to obtain fashionable clothes and shoes, says Mathew. “We teach them how HIV is spread and how to avoid the infection. The best way to avoid the infection is to avoid the peer influence and the temptation of having valuable things.”
John says when the team makes presentations it is not unusual for older women to be surprised that teenage girls have so much information on issues affecting girls and women.

Dinah John (left) and Angel Mathew are part of an intergenerational team of women learning and sharing information about HIV and AIDS in Arusha, Tanzania.