Say Canadians about religion in a recent Ipsos Reid poll. 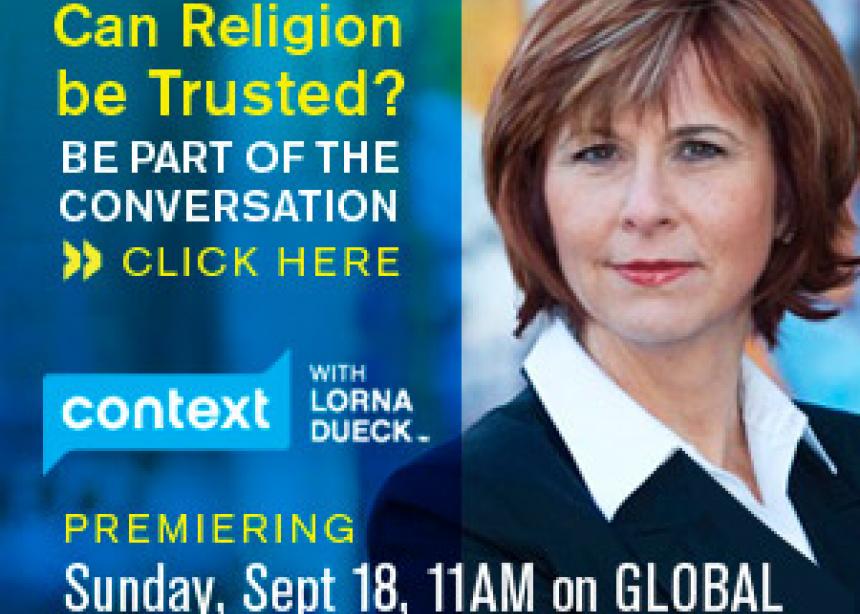 The majority of Canadians surveyed in a new Ipsos Reid poll say religion creates more questions than answers in the search to explain life and the world around them. In addition, half of the respondents agreed that ‘religion does more harm than good’.

“We have a generation completely split on the reliability of religion. When over half a survey group claims they believe in God, and 50% declare religion only confuses things, there is a need for discussion,” says Lorna Dueck, host of TV show Context with Lorna Dueck, a new addition to Global’s fall lineup that will aim to examine current issues through the lens of faith. “It’s time to take our religious fears and suspicions out of the closet, put it into public dialogue.”

The survey commissioned by Context also reveals that while Canadians identify themselves as belonging to a religious faith, most have lost touch with what it means to be religious, lacking confidence to apply their beliefs to their every day lives. For example, while a slim majority of Canadians believe in God, only 13% of respondents attend a weekly church service. Interestingly, 28% of Protestants, 33% of Catholics, and 23% of those who attend weekly religious services do not believe in God.

The most gripping news stories of the summer have featured religion: the Arab Spring, the Norway massacre, the London riots, and just this past Sunday, the tenth anniversary of 9/11. Consequences of religious fanaticism dominate the news cycle today. “Can Religion be Trusted?” - that’s the question award-winning journalist and television personality, Lorna Dueck, seeks to answer in the premiere episode of her new show.

“Everyday we are confronted with the stories that confuse our sense of justice and make us ask ‘why?’. Our beliefs should help us to answer those questions, but this poll shows us that Canadians are struggling with the issue of faith,” says Dueck.

The show will feature instant audience-polling technology and high profile guests. “We’re speaking with lead apologists of Islam and Christianity, as well as journalists that track the religious tensions around the world to ask ‘Can we trust religion?,” says Dueck. “We’ll gather instant feedback from our studio audience as they hear what our guests have to say, so that Canadian views can shape the discussion in real-time.”

•Nine in ten (89%) ‘agree’ that they are ‘completely comfortable being around people who have different religious beliefs’.

•Canadians are split on the role of religion in our society.  While one half agrees that ‘religious practice is an important factor in the moral lives of Canadians, only 29% agree that ‘religious folks’ are better citizens.

•One in 3 Canadians agree that their ‘religion defines’ them as a person. 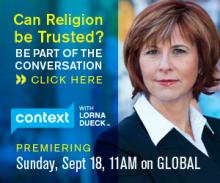