Ministry in a very different world 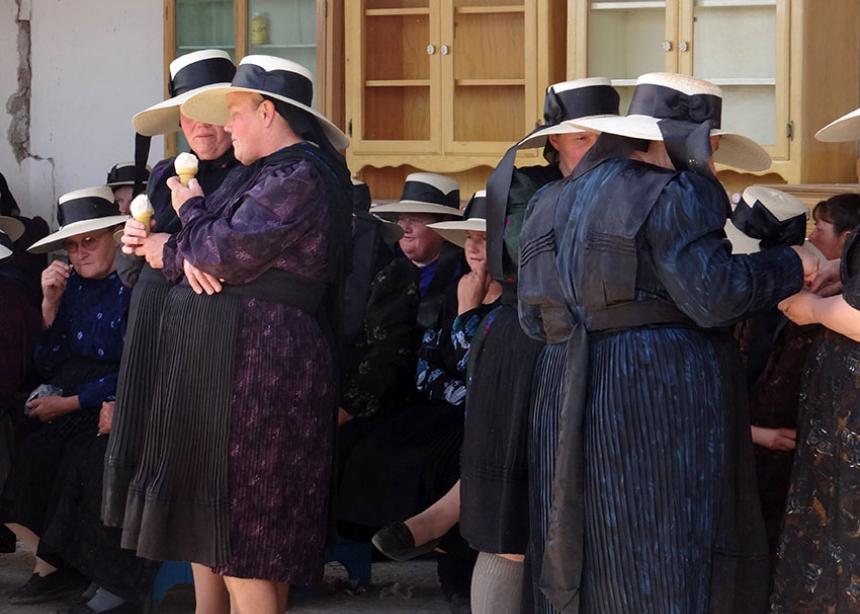 In 2009, when Dave and Margaret Penner first went to work among Low German-speaking Mennonites in Mexico, they encountered a “vacuum.”

The people of the Durango Colony, where the Penners were based during their four-year Mennonite Central Committee (MCC) assignment, were “impoverished in every aspect of life,” Margaret says.

Arising from this mental, emotional, physical and spiritual vacuum, the Penners also encountered a deep hunger, a longing for more. “So many people were searching,” she says.

Dave adds that the emptiness that many of the colony members endure is inherited, largely a result of decisions made by their forefathers, not themselves. They are “stuck,” he says.

Sitting in the morning sun on their backyard deck in Winkler, Man., less than a week after completing their term, the Penners speak eagerly and warmly about their time in a very different world.

The Durango Colony was established in 1924, when Old Colony people, mostly from Saskatchewan, moved to Mexico seeking greater religious freedom, particularly the freedom to run their own schools in the language of their choice.

Today, the colony is made up of about 7,500 residents, spread over 32 villages. Dairy farming is the primary economic activity.

Religion is a dominant force in the colony. About 95 percent of colony residents belong to the Old Colony Church. Services are in High German, which most people do not understand well, as Low German is the predominant language. Sunday school and youth groups are non-existent, and Bible study is not encouraged. As a result, most people’s understanding of faith is limited to what they hear in a partially understood language from the pulpit.

Church influence extends well beyond Sunday morning. Radio, television and newspapers are forbidden. Until 1999, electricity, motorized vehicles other than tractors, and rubber tires on tractors or bicycles were too.

All schools are church-run. Ironically, although freedom to operate their own schools was a primary motivation for those who set up the colony in the ‘20s, the Penners say the education system is very weak. Most children attend only until the age of 12 or 13, and many finish school largely illiterate. The most highly educated teacher in the colony has completed Grade 9.

Poverty and social problems abound. Many families cannot afford to pay school fees. The Penners know from experience that alcoholism and domestic abuse are widespread.

Putting their experience to work

This setting provided Dave and Margaret, who are of retirement age, with seemingly endless opportunities. Their official role was to oversee MCC programming in the Durango Colony and the La Honda Colony, a four-hour drive away. Each colony has three local staff, as well as an MCC resource centre that includes a clinic, meeting space, and a library that also sells religious books and school supplies. The resource centre in La Honda was built during the Penners’ term.

Margaret, who is a registered nurse, was available two days a week for medical consultations, which often involved counselling. Prior to her arrival, colony women had to rely on their husbands to both transport them to a Spanish-speaking doctor and translate for them. Most colony men speak limited work-related Spanish and the women virtually none.

Now a doctor from the colony, whom MCC supported during his studies, has opened a practice in the town adjacent to the Durango Colony.

Margaret also assisted with school fundraising, a concept that was previously unfamiliar; held seminars on parenting, massage and health for women; oversaw production of a cookbook; and conducted two weekly women’s empowerment groups that included a strong spiritual component.

Together, the Penners oversaw programming at the resource centre, which included drop-ins for kids, computer training, and classes in Spanish and English. They also sat on the school and personal care home committees.

The majority of their work was done in Low German, which was their first language growing up in southern Manitoba.

Dave, a businessman, took the lead on administration, as well as with a weekly addictions support group for couples. This work included translating materials into Low German and follow-up visits to men in the group.

Not one to shy away from making cold calls, something Dave says he honed during his 40 years in business, he developed relationships with a broad range of people, eventually working with colony leaders, leaders in all of the three main church groups and business partners experiencing difficulties.

When drought hit the area in 2012, much of the Penners’ time was taken up with distributing aid to Mennonites as well as to indigenous people in remote mountain areas in the region.

A key dimension of their work was capacity building. The addictions support group, the women’s empowerment groups and some of their committee work have since been taken over by locals.

The couple speak with much warmth and gratitude of the ways in which people in the colony opened up to them. Although people are stuck in a very boxed-in life, Dave says they eagerly shared with them in private conversations, revealing the darkest aspects of colony life as well as the tremendous potential and desire for change.

People also opened up to God. The Penners prayerfully incorporated an element of spiritual nurture and biblical literacy into much of their work. They also involved themselves with local churches, dividing their Sunday mornings between the Old Colony and the two other main groups: the Kleine Gemeinde and Conferencia Misionera Evangélica. As part of their participation in the latter two groups, both of which are relatively reform-minded, the Penners assisted with the distribution of Low German Bibles, showing The Jesus Film in Low German, and bringing in Low German gospel singers.

In addition to all of this, they talk about frequent, unscheduled knocks at their door. They also used home visits and e-mail to generate considerable interest in the work at their home church, Grace Mennonite in Winkler, and beyond. “We were constantly on the go,” Dave says.

While people readily opened up to Dave and Margaret one-on-one, the broader strictures of colony dynamics and the powerful church enforcement of the stifling status quo, made change difficult.

“We saw so much potential,” Margaret says, “yet our hands were tied because of the lack of openness. . . . The church restricts people from basic freedom.”

Although much of the Penners’ work would have been at odds with Old Colony norms, they maintained notably good relations with church leaders.

Reflecting on four full years in the colony, Dave points to a lack of even rudimentary education as the root cause of many of the problems. Following a simple PowerPoint-style presentation was difficult for many. “How do you explain a basic theological concept to people who have so little education,” he asks. Similarly, Margaret says people’s ability to understand the basic workings of their bodies or concepts related to medication was severely limited.

The Penners’ story is a mix of anguish over the suffering in which they saw so many people caught, gratitude for the change they witnessed, and acknowledgement of dependence on God’s working.

Faced with overwhelming need, constant demands and ongoing security concerns—three weeks into their term a colony member was kidnapped by one of Mexico’s notorious drug cartels and held for ransom—Margaret says they learned to depend on God and just be open to the Spirit’s moving.

For both of them, their time in the Durango Colony was a blessed coming together that drew on their upbringing, education and careers. Dave says of their assignment, “God prepared us through our lives.”

While MCC does not send church workers per se, Dave and Margaret Penner certainly lived up to the MCC motto of service “in the name of Christ.”

Their message to Mennonites in Canada is that the needs in the two colonies they worked in are profound and largely not of the people’s own choosing, while, at the same time, opportunities for involvement are virtually limitless.

1. What experience have you had with Low German Mennonites who have left Mexico or other parts of Latin America and moved to Canada? What challenges do they face in your community? Why do some of them choose to return?

2. Will Braun quotes Margaret Penner as saying that the Mennonites of Durango are “impoverished in every aspect of life.” What do you think is their most important need? Is it inevitable that economic poverty and withdrawal from the world will result in an unhealthy society? How important is basic education for a healthy society?

3. Margaret Penner says that the church in Durango “restricts people from basic freedom.” Is this true of other Mennonite groups who base their community life on tradition? What are the benefits of a strong community identity? Under what conditions do rigid community norms become unhealthy? Why don’t more people “escape” from these close-knit communities?

4. Although the Penners were able to establish good relationships with Durango church leaders, they found the Old Colony church unwilling to adopt changes. How should Mennonite Central Committee respond to resistant leaders when the needs seem so obvious? What should Mennonites in Canada be doing about the needs of Mennonites in places like Durango? 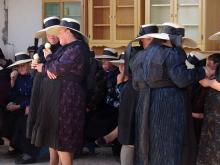 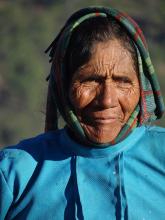 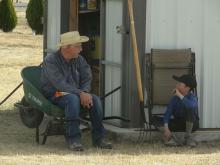 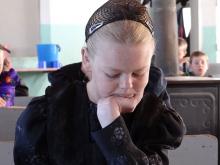 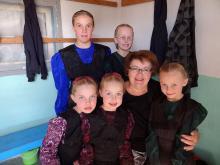 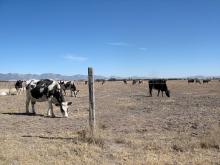 No doubt the Penner's experienced a world different than their own. Surprisingly they experienced nothing good in that "other world," at least according to the article. It is possible, I suppose, that a culture exists where there is nothing good present (or at least people who think nothing good exists in another good culture). What surprised me even more than the Canadian Mennonite publishing such a one-sided story, was the caption of photo 4 of 6. "A student in an Old Colony school in the Durango Colony ponders an assignment. Or is she daydreaming of a life different from the only one she’s known?" Seriously? Would you do that with any other person from any other culture? The caption clearly projects your preoccupation and anxiety onto their reality--while using her image as a medium. What if I took a picture of a young girl in a Winkler grade school (who attends the local MC Canada or EMMC church) and captioned it to say, "She is doing her work, or is she dreaming about living in Hollywood, CA?" The Canadian Mennonite can and should do better than that!