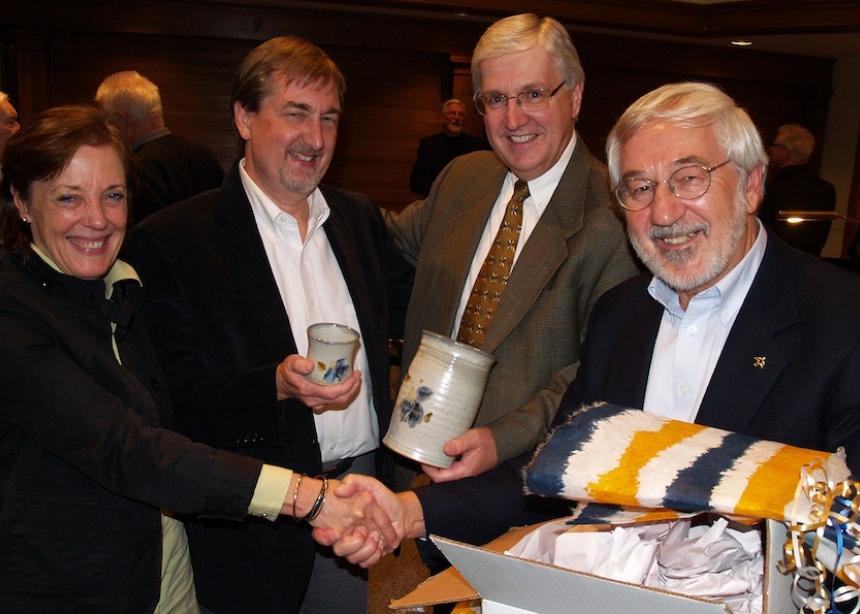 “You were a new kind of ‘migrant missionary’ described in John Howard Yoder’s As You Go, said Bert Lobe, MWC’s North American representative who has worked closely with Miller over the years.  Lobe noted this as one of several leadership qualities of Miller for a small gathering of friends and associates at Rockway Mennonite Church on Sunday evening, Oct. 23, including Miller’s successor, César Garciá attending via Skype from his home in Bogata, Columbia.

Lobe recalled the Millers selling their things and leaving home in Indiana, “not bound by inheritance,” serving in France with Mennonite Central Committee and the Mennonite Board of Missions (now Mennonite Mission Network), taking up residence in France, learning the language and writing a PhD dissertation on 1st and 2nd Peter in French, leaving them with the question, upon retirement:  ‘where is home?’”

In summarizing their sojourn, Lobe noted these other accomplishments and vision:

•In 1990 you accepted the invitation to serve the global Anabaptist Communion, joining MWC as General Secretary. You inherited a huge deficit from the 1990 Winnipeg Assembly and you got it dealt with.

•I heard you teach from 1st Peter at a three day MCC annual meeting in the late 1980s and I never forgot it. Superb not only for the insights but for the way in which they were presented. I regret that the church never benefited from your biblical scholarship and capacity to teach.

•You understand the church; you understand the early church and the experiment that it was: insiders and outsiders, rich and poor, learned and unlearned, suffering and justice, issues of morality and integrity and community – a fledgling people struggling to find its way after Jesus' departure and all of these challenges acknowledged and addressed in the Epistles. And you understood long ago that MWC is itself that kind of experiment. MWC provides a space for the simplicity, poverty and vibrancy to engage wealth and sophistication. You helped nurture our communion to engage, to a radical new kind of listening and sharing.

•You led us south – three assembles since 1990, all in the south. Calcutta – a house of cloth; Zimbabwe – we will not forget you. And Paraguay, that earthshaking embrace by Danisa Ndlovu and Ishmael Noako and the spontaneous and thunderous applause of 6,200 of our people answering “yes, yes.”

•Your “Personal Vision” from a March 7, 2006 speech in Pasadena called for global deacons to nurture the church, to “see and respond to the needs of one another.” What you understood very early on was that in the church we live by virtue of the gifts we exchange, that giftedness having nothing to do with geography or wealth and everything to do with exchanging gifts, with mutual generosity.

•Your capacity to take us into the ecumenical world; to be in dialogue with the Catholic and Lutheran churches, to help us through to the reconciliation celebrated in Stuttgart in July 2010; to nudge us into conversation about baptism with these folks and to engage with the 7th Day Adventists about what we have to learn from each other, about “living the Christian life in today’s world. This was suburb leadership, statesmanship.

•You reminded us often in the run up to Assembly 15 in Paraguay that our focus and challenge was to “come together in the mind of Jesus Christ.” You helped us understand that, as Joan Chittister and Archbishop Rowan Williams remind us, that “unity is more often about solidarity than uniformity. Unity is a commitment to becoming one people who speak in a thousand voices. Rather than one message repeated by a thousand voices, unity is one message shaped by a thousand minds.”

In his opening remarks as moderator of the evening, Ron Mathies noted that Mennonite World Conference was the vision of such early church leaders as Christian Neff, Harold S. Bender, C.J. Dyck and Ross Bender.

Miller, using the metaphor of a boat mast in changing winds, said that the North American mast was a strong one in the dramatic shift of demographics in MWC’s 1.6 million population where only 30 percent is from the global North but having 80 percent of the wealth.   He credited such persons as the late Milo Shantz, a Kitchener-Waterloo entrepreneur who was a great supporter of MWC over the years.

“Now the wind is blowing southward,” Miller said, noting that his "deepest wish came true” with the appointing of César Garciá as his successor from the Global South.  “In a world of 41,000 church denominations, it is important that we have representation in our small denomination from the growing numbers in the South, some 50 percent of which now live in Africa, Asia and Latin America.”  Garciá begins his new assignment on Jan. 1, 2012.

It was also announced that Ron Rempel, recently retired as executive director of Mennonite Publishing Network (now MennoMedia) and past editor/publisher of Canadian Mennonite, was named news editor for MWC, taking over from Byron Rempel-Burkholder, who had edited and written for the news since June 2010 when longtime editor Ferne Burkhardt retired. Rempel-Burkholder continues to edit MWC’S quarterly magazine, Courier-Correo-Courrier. 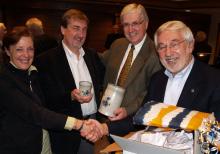 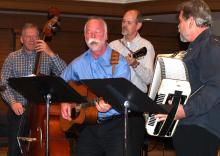