Iron Will explores the joy and resilience of the Haitian people 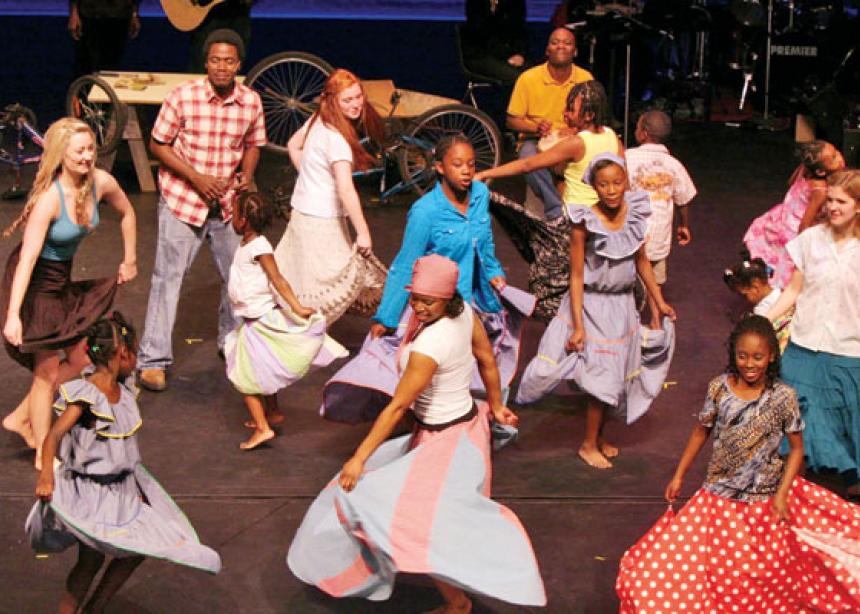 Haitians and Canadians mingle in a joyful dance in the Haitian village during a recent production of Iron Will in Waterloo, Ont.

About a year ago some Mennonite Economic Development Associates (MEDA) staff saw the play Iron Will in Hamilton, Ont. So inspired were they by its microfinance message that they came back to the Waterloo office wondering if it could be performed there.

On March 26 their hope was realized as the Scene Change production played to 500 people in the Humanities Theatre at the University of Waterloo. The performance was sponsored by MEDA, and executive director Allan Sauder had the opportunity to speak about MEDA’s work with Fonkose, a microfinance credit union in Haiti, during the intermission.

The play centres around three Canadian youths who prepare a project on microfinance for a university class. When they hold a fundraiser to help out a microfinance program, among the donations they find a cheque for $10,000 and tickets to Haiti. Iron Will explores family responses to the opportunity, as well as the youths’ decisions to go.

While in Haiti, they note the oft used phrase, “we’re getting as much or more than we’re giving,” but articulate what it is. Although the Haitians have little compared with the Canadians, they share it freely. Life is hard, and sometimes Haitian mothers have to chose who eats and who doesn’t in their families, but they continue with a joyful and resilient strength. Microfinance helps them to buy small things like a sewing machine, or a shop for bicycle repairs. Small things, but they make a big difference.

Written by Lance and Peggy Wright, and directed by Rob Irish, the story is based on experiences of North American workers in Haiti. Scene Change Productions styles itself as “a movement of young people who imagine and create a more just and compassionate world.”

Besides Iron Will, Scene Change produces The Global Village, which explores life in a limited environment; Amazing Race for the Human Race, which builds teams to work for change; and The Global Dinner, where diners receive unequal portions based on what people around the world receive.

Haitians and Canadians mingle in a joyful dance in the Haitian village during a recent production of Iron Will in Waterloo, Ont.