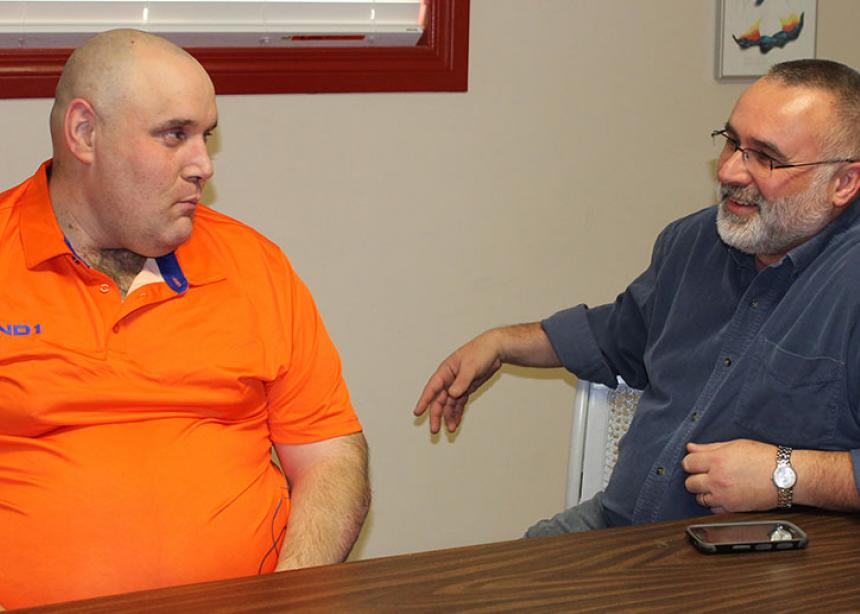 Sporting a bright orange T-shirt and a shaved head, Ryan Grills is an imposing presence, but his handshake is warm and his voice enthusiastic as he speaks about Forward Step, a support group for ex-offenders that he chairs. Forward Step is a program of the Micah Mission, an inter-church agency committed to restorative justice in Saskatoon.

Forward Step members include four ex-offenders and six volunteers. Everyone is welcome, says Grills, but drugs, and alcohol are strictly prohibited and foul language is discouraged out of respect for the volunteers.

Grills values his role as chair. “It makes me think that I’m doing something good,” he says. Having seen his own life changed through restorative justice and through faith in God, Grills wants to help others. “I’m a firm believer, God can change anybody’s life.”

The agency formed six years ago when Person to Person (P2P), a prison visitation program, shared office space with the Community Chaplaincy. Taking its name from Micah 6:8, its website states: “The Micah Mission exists as an expression of the church’s calling to ‘do justice, love mercy and walk humbly with our God.’”

Both Mennonite Church Saskatchewan and Mennonite Central Committee (MCC) Saskatchewan support the agency, but as coordinator Dave Feick explains, “A big part of creating the Micah Mission was to expand it beyond MC Saskatchewan, beyond MCC, and to make it more ecumenical.”

Currently, the mission has representatives from Mennonite, Quaker, Lutheran and United Churches on its board of directors. Both Mennonite Church Saskatchewan and Mennonite Central Committee Saskatchewan support the agency.

Along with P2P and Community Chaplaincy, the mission facilitates Circles of Support and Accountability (CoSA), which addresses the needs of high-risk sexual offenders who have served their sentence and have been released into the community. The end goal of the CoSA is “no more victims.”

“It’s not just support, it’s accountability,” says Feick. “It’s knowing that people are going to hold you accountable.” And that applies to both ex-offenders and volunteers. The ex-offender “can hold us accountable, too,” he says. “If we’re not there to support you as often as we should be, then we need to talk about that.”

One of the challenges of recruiting volunteers, Feick says, is “letting people know that it’s a safe, secure environment to visit with fellows.” Sometimes people are fearful of getting to know offenders, particularly sex offenders, he acknowledges, but once they make the commitment, most volunteers find it rewarding. “I think all of us have learned that they’re really not all that different from us,” he says.

Aside from running its own programs, the Micah Mission cooperates with related agencies. One such agency, Str8 Up, helps those who are trying to free themselves from gangs. The Micah Mission is partnering with Str8 Up to host the two-day “10,000 healing steps: Community and resiliency conference” at TCU Place in Saskatoon on Feb. 5 and 6, 2014. The featured speaker will be well-known gang interventionist Father Greg Boyle of Homeboy Industries, Los Angeles, Calif. For more information, visit str8-up.ca/.