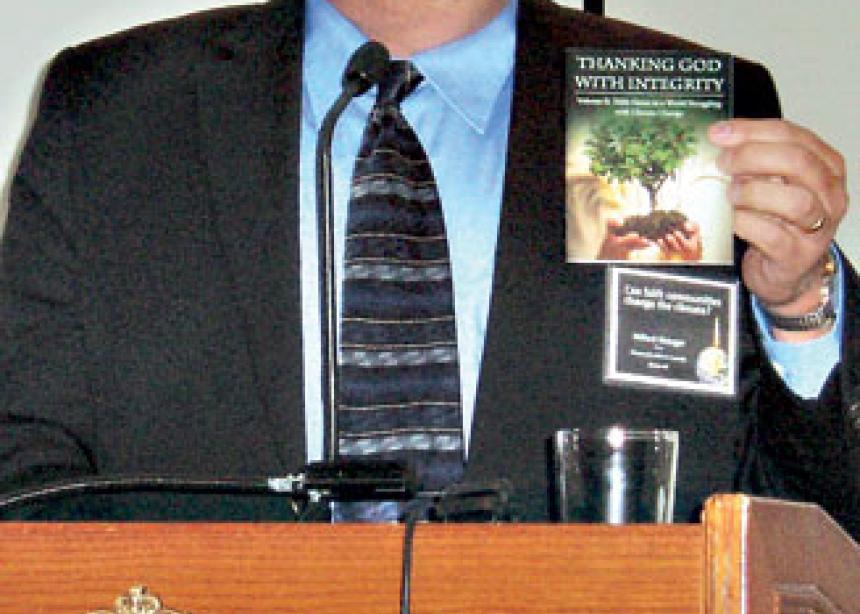 Whether the scientists are right or wrong about climate change is no longer the issue, Willard Metzger, Mennonite Church Canada’s executive director (formerly general secretary), told about a dozen senators and MPs in Ottawa at a breakfast meeting on Oct. 25

“Whether individuals believe that climate change is human induced or not, the facts remain that sea levels are rising, deserts are expanding, violent storms are becoming stronger and more frequent, and that the poor, especially children, are paying the highest price,” Metzger told his audience.

His address—first delivered at an interfaith panel on climate justice the day before—further exhorted the political leaders: “Whether the developed world takes responsibility for the effect of climate change or not, we have no other option but to take responsibility for our [North American] consumption patterns.”

“Climate justice,” explained Metzger in a subsequent interview, is a term that helps people understand climate change as a moral issue. As a people of faith, he said Christians have a moral obligation to ensure that God’s creation is maintained as an expression of worship.

But he was careful not to equate creation care with creation worship. “Caring for creation is part of our worship and thanks to God,” Metzger said. “If you love God and worship God, you need to take care of what God has given you. Would you feel loved and cared for if a friend came to your home and punched holes in the walls?”

Metzger is keenly aware that climate justice needs to be on the agenda of the national church. “Increasingly, our young adults consider climate justice a concern they want their church to be engaged in,” he said. “As a Canadian church in a context rich in natural resources, it is important to encourage ourselves to discern appropriate care and just use of these resources.”

Christians can express their care for creation by witnessing to those outside the church. “Our increasingly sceptical Canadian society is demanding the presence of the church in these real-life concerns,” he said. “If we can demonstrate that as part of our allegiance to God, then we have a platform to be taken seriously.”

The World Council of Churches invited Metzger to attend the 2011 United Nations Climate Change Conference in Durban, South Africa, from Nov. 28 to Dec. 9. He is keenly aware of the tension between the invitation and the distance he must cover to get there. Of all modes of travel, air transport has been shown to produce the largest carbon footprint, and Metzger travels a lot.

“Our commitment as a church is to build strong relationships, but we also have to acknowledge the tension in that,” said Metzger, referring to his travel schedule. “This is not different from many other organizations that require strong relationship building, but it is also important to know that [MC] Canada is engaging technology to reduce ecological impact.”

Back at the breakfast gathering of MPs and senators, Metzger’s address received a warm welcome. The speech was translated into French and a bilingual version was distributed to all MPs. Later, Senator Grant Mitchell wrote Metzger, “Thanks for this. It is exceptionally good. And thanks for your leadership and inspiration on this important issue.”

“I was humbled by the response,” said Metzger. “It’s not every day a church leader’s address is translated and circulated to all elected federal government leaders.”