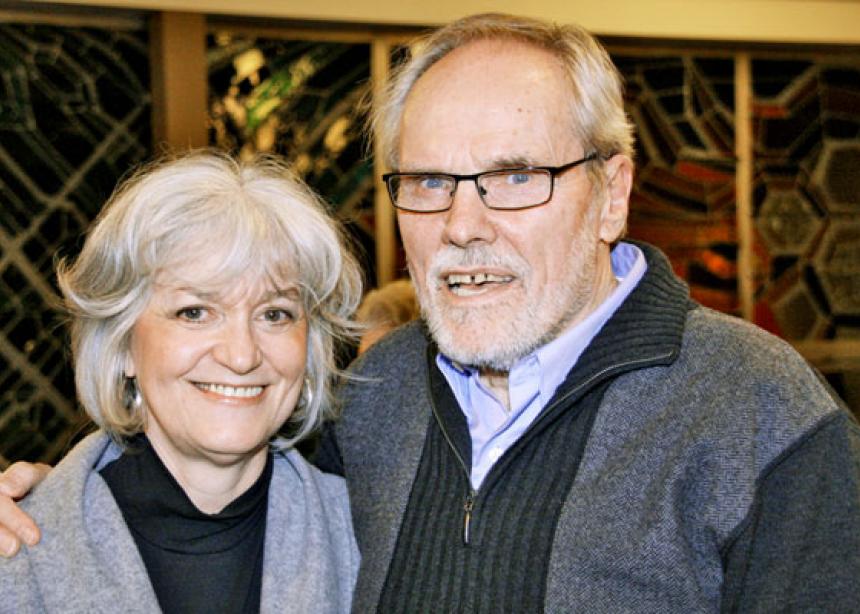 The chapel at Conrad Grebel University College was packed to hear renowned Mennonite author Rudy Wiebe read through his life of writing on Jan. 11, 50 years after his 1962 novel, Peace Shall Destroy Many, was published.

Hildi Froese Tiessen marks the publication of Wiebe’s first novel as the beginning of Mennonite writing in Canada, although Wiebe began his reading with a story he had written several years earlier but which was not published until later.

In an interview with Tiessen, professor of English and peace and conflict studies at Grebel, she noted that, while there had been materials published in both German and English before Wiebe’s book, his was the first published completely in English by a non-church-related press, and was the first Mennonite book published for the larger Canadian audience.

To celebrate this anniversary, Tiessen has put together a series of readings over three months. Open to the public, the readings also form the basis of a course she is teaching. Students hear writers read their own material and comment on it, as well as reading other works and writing papers.

Tiessen remembers growing up in WASP Canada as “minor characters in someone else’s story.” Wanting to have stories of her people read has motivated her to focus on Mennonite literature throughout her career. She has seen changes over the last 50 years. Earlier writings were part of the “immigrant” genre in which writers try to make sense of the old and cultures with one foot planted in each. Now, as Mennonites have by-and-large become part of the Canadian mainstream, writers are exploring what it means to be Mennonites in the multicultural mosaic, or simply what it means to be Canadian.

Earlier writers were often seen as “angry young people out to change the church,” she said, while some more recent writers are content with their spirituality, either in or outside of Mennonite churches. But in or out of the church, writers, as artists, often look at things from a different slant and have important things to say to the church. “We need to read them,” says Tiessen, referring to writers like Dora Dueck, Darcie Friesen Hossack, Carrie Snyder or Hedy Martens.

At Wiebe’s reading, retired CBC commentator Howard Dyck recalled trying to buy a copy of Wiebe’s My Lovely Enemy in 1983 in a southern Manitoba town. Finding none on the shelf, he asked the clerk if the store had a copy. Meeting him at the till, the clerk handed Dyck the book in a brown paper bag with the rehearsed sentence, “The management does not agree with all the contents of this book.”

The series continues through March 14, at 7 p.m. on Wednesdays in the Grebel chapel including Julia Kasdorf, David Bergen, Darcie Friesen Hossack and Paul Tiessen.