Exchange ideas and perspectives centering on the theme "Living the Christian Life in Today's World." 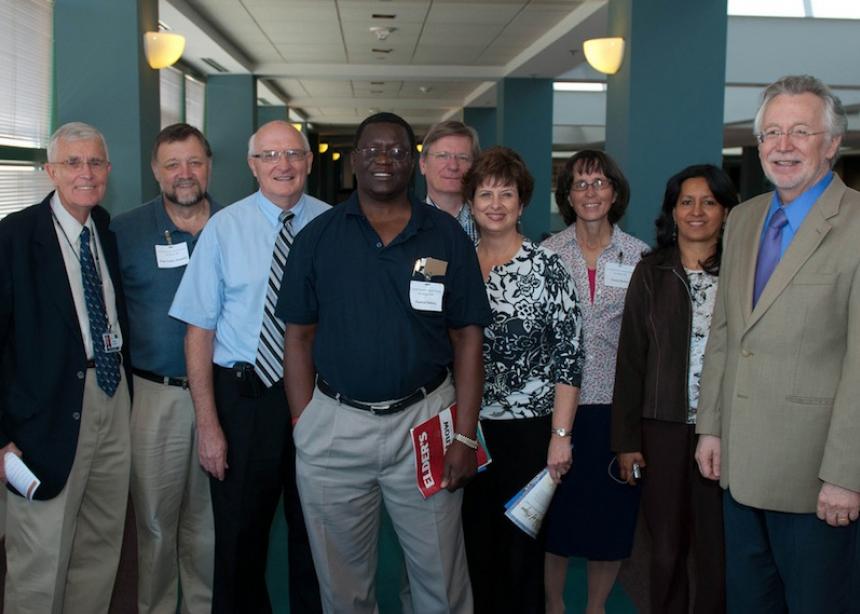 For four days representatives of both world communions exchanged ideas and perspectives centering on the theme of “Living the Christian Life in Today’s World.”  After each group presented an overview of the history of their communion, papers were also presented by each group on the topics of peace, non-violence and military service; discipleship and non-conformity; health, healing/salvation and ecology; and the nature and mission of the church.

During the past several years, said Suderman, the SDA interest in investigating and recovering their Anabaptist affinities led them to seek these conversations. Anabaptist-Mennonites have likely been less aware of their common ground with Adventists, but the affinities were immediately evident in the conversations.

Adventists and Anabaptists come from diverse historical backgrounds—Mennonites from the Anabaptist movement during the Reformation in the sixteenth century and Adventists from the Second Great Awakening in the United States in the nineteenth century.

They share a desire to recover the authenticity and passion of the New Testament church, a commitment to be people nurtured by the Bible, a sense that obedience implies non-conformity, a similar understanding of Christian history, and a strong commitment to be followers of Jesus in their personal lives and in their corporate witness to the world.

Each communion brought to this conversation a deep experience of what it means to live the Christian faith often as a minority voice in the world and stressed the importance of discipleship and the practical living out of the Christian life.  Together they understand that Christians live “in the world” but are not “of the world.”In its early days the Adventist church stressed the importance of community, was pacifist, advocated adult baptism, and encouraged discipleship to Jesus as Lord in ways that were very similar to Anabaptism.

In a joint statement, SDA and MWC leaders said each shares "a desire to recover the authenticity and passion of the New Testament church, a similar understanding of Christian history, and a strong commitment to be followers of Jesus in their personal lives and in their corporate witness to the world."

The discussion also included honest and candid sharing of challenges facing both churches in the areas of non-conformity with the world, peace-making and military service, ecclesiology, health and healing and the respect for the environment.  Both communions thus face a challenge in maintaining the importance of historic practices and beliefs.  Adventists and Anabaptists left with an appreciation of the diversity of the gifts they each bring and contribute to the Body of Christ.

"By sitting down and talking with those of other faiths, we gain a deeper understanding of who they are," said John Graz, Public Affairs and Religious Liberty director for the Adventist Church, whose department organized the June 28 to July 1 event at its world headquarters.

Danisa Ndlovu expressed his thanks to the Adventist Church for hosting the conversation. “When you see people from a distance you can't say that you know them,” he said. “But it is different when you sit down with someone and exchange ideas -- now we can say ‘We know you.’”

Three topics that Adventists focus on more than Mennonites include the theology of Sabbath, a concern for healthy living based on a vegetarian framework, and the Second Coming of Christ. Adventists hold their Sabbath day of worship from Friday sundown to Saturday sundown. The MWC delegation requested an opportunity to experience how Adventists keep Sabbath, and they stayed an extra day to attend a Friday evening supper and a church service on Saturday.

MWC delegation members said they were interested to learn of the Adventist Church's focus and commitment of resources to issues of healthful living and religious freedom. The Adventist Church incorporates health as part of its faith and operates the largest integrated network of Protestant hospitals worldwide.

MWC representatives also compared the structure of their global communion to that of the Adventist Church. Most Anabaptist-related congregations are autonomous, which generates more diversity, noted Suderman, former general secretary of the Mennonite Church Canada.

In the Adventist Church, theology and direction is offered at the General Conference world headquarters and then trickles down through the rest of its five levels of administration: divisions, unions, conferences and local congregations. The administrative structure may have been responsible for some of the Adventist Church's numerical success, Suderman said.

The next conversation, to be convened next year in Switzerland, will explore further subjects, such as interpretation of Scripture, eschatology, Sabbath and worship, and areas of common witness and mission.