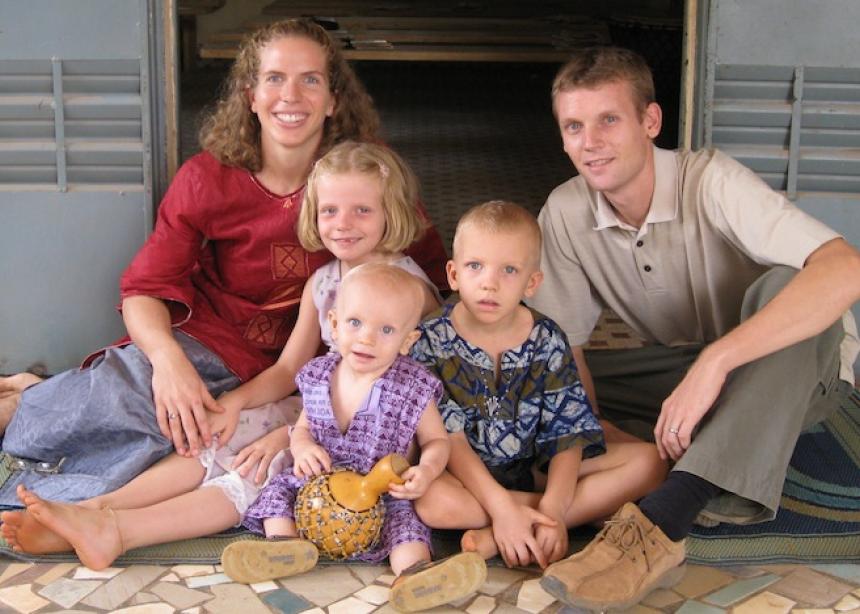 Jeff and Tany Warkentin, formerly of Leamington, Ont., Springridge, Alta., and Winnipeg, Man., have three small children. Their assignment is scheduled to end this year.

in light of continued political unrest in Ouagadougou, the capital city.

Six years ago, Warkentin, together with his wife Tany, responded to an invitation by the Mennonite Church in Burkina Faso for assistance in starting a church for university students in Ouagadougou.

Last night,, Warkentin reported in an email that the government announced all schools in Burkina Faso will close down earlier than normal for their two week spring break in an effort to quell student unrest.

The early break applies to the University of Ouagadougou as well, which has just barely begun courses for the 2010-2011 school year, about five months later than the traditional starting date in October.

Warkentin reported that the military has evicted university students from their housing without notice, and the university's subsidized restaurants as well as student financial aid programs have been shut down.  “This is a fairly provocative move,” wrote Warkentin. “Take away people's food and roof and they will respond.” A week ago, the city of over 1 million people is also on rolling daily power black outs lasting up to seven hours in some areas, while temperatures reach the mid-40s Celsius. Warkentin reports that the outages are less frequent and shorter in his neighbourhood.

Warkentin wrote that the city’s streets are emptier than usual and downtown protests have resumed, but added that “We are not in a state of fear or worry.  To put things into perspective, one university student said that if this were anywhere else, a civil war would have broken out by now, that's how much the Burkinabé [people] love peace. But how far can they be pushed?”

Jeff and Tany Warkentin, formerly of Leamington, Ont., Springridge, Alta., and Winnipeg, Man., have three small children. Their assignment is scheduled to end this year.