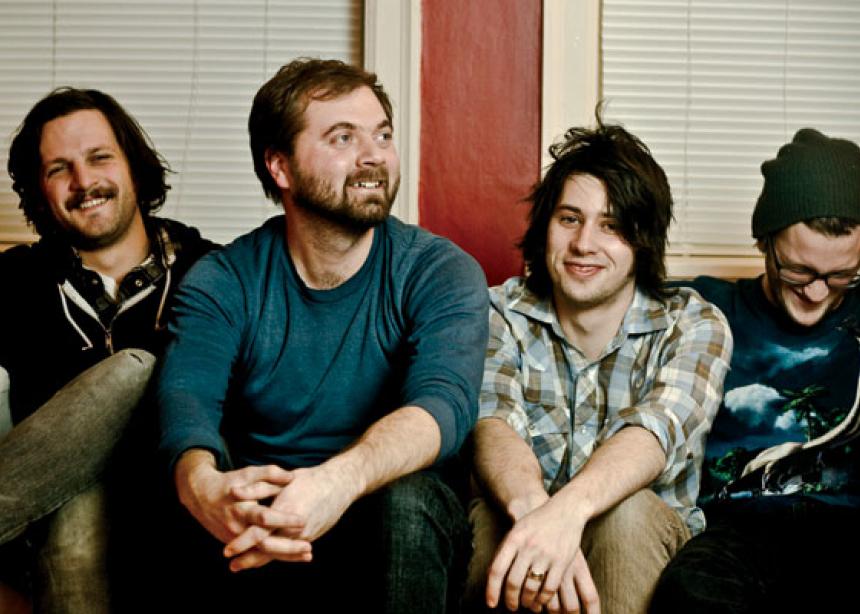 Although The Liptonians are not a religious band, singer-guitarist Bucky Driedger, left, says his Mennonite heritage has influenced the way he writes the band’s lyrics.

One of the most sought-after recording engineers and producers in Winnipeg, John Paul Peters, was brought up Mennonite. Michael Petkau Falk, artistic director of the West End Cultural Centre, a 400-seat concert venue in Winnipeg’s Spence neighbourhood, has similar roots.

When it’s not being used to record choirs or Camps With Meaning CDs, the recording studio at Mennonite Church Manitoba has been used to produce albums by Mahogany Frog, a progressive experimental rock band, as well as The Other Brothers, an acclaimed roots duo.

But while some of these musicians no longer affiliate themselves with the church, a handful still hang on to their ties with MC Canada.

Paul Schmidt, the trombone player in Flying Fox and the Hunter Gatherers, is one of those musicians. Formerly the youth pastor at Carman Mennonite Church, Man., Schmidt now attends Home Street Mennonite in Winnipeg.

“I enjoy playing music, and God created me, so I’m out there doing what God’s given me a passion for,” the 28-year-old says of how his faith influences his work with the band. “I think Christians have a job of figuring out the best way to live a good life, . . . so as an artist I try to be a part of [music] that is really exploring what the good life is supposed to look like.”

Whether it was The Guess Who in the 60s or today’s The Weakerthans, Winnipeg has long been known for its vibrant music scene. Some cite the city’s isolation and freezing winters as the reason why so many people stay inside, form bands and hone their skills on the guitar and drums.

But why are Mennonites dominating Winnipeg’s music scene right now?

For Bucky Driedger, singer-guitarist for The Liptonians and experimental pop-rockers Royal Canoe, part of the answer comes down to numbers while part can be traced back to Mennonite tradition. “There are a lot of Mennonites in Manitoba,” the 25-year-old says simply, adding, “I think [the Mennonite church] is a culture that regards music very highly, so it’s natural for Mennonite youth or young people to have an interest in making music, whether it’s rock music or choral music or whatever.”

The Liptonians have toured across Canada five times and won a Western Canadian Music Award for their self-titled 2008 debut album. Their second album, Let’s All March Back Into the Sea, was released this past February. The Globe and Mail described the disc as “brainy, entertaining stuff, from a band that can do it all, and very well.”

Driedger says that, while The Liptonians are not a Christian band with a religious agenda, his Mennonite faith influenced the way he wrote lyrics for Let’s All March Back Into the Sea. “I got really sick of saying the word ‘I,’ which is a very Mennonite thing,” Driedger says. “I kind of got sick of writing cheesy, introspective songs, like ‘I’m so sad,’ or whatever, so I think trying to write in a way that can relate to more people, so more people can take the lyrics to heart, is something I’ve definitely done a lot of thinking about.”

Reconsidering the way it thinks and speaks about popular music is something the Mennonite church would do well to do, says Jeff Friesen, who, in addition to working as an associate pastor at Charleswood Mennonite Church, Winnipeg, hosts two shows on a local campus radio station and writes about music for a local magazine.

“[Popular music] is an art form that is all-encompassing in a way. You can’t really escape pop music, as hard as you try,” says the 29-year-old, who is completing his master of arts in theological studies degree at Canadian Mennonite University, Winnipeg, and will explore popular music in his thesis. “You walk into a mall and you’re just bombarded with [popular music], and you can either slough off those experiences as kind of extraneous and non-meaningful, or you can allow yourself to be surprised in such a way that something new can be exposed to you.”

Driedger agrees, adding that music and art are important parts of making church a meaningful experience. “Maybe that’s not for everyone, but I feel like good art and music makes for better headspaces to contemplate things that are beyond this world,” he says. “Good art should help people . . . imagine a new way of thinking about the world.”

Although The Liptonians are not a religious band, singer-guitarist Bucky Driedger, left, says his Mennonite heritage has influenced the way he writes the band’s lyrics.

Most of the members of Flying Fox and the Hunter Gatherers have Mennonite roots, including Paul Schmidt, second from right.