Meet me at the Grand!

This summer, the congregations of Mennonite Church Eastern Canada will welcome visitors from across the country as they host the MC Canada assembly in Waterloo, Ont. Like most Mennonites of European ancestry, those who settled along the Grand River arrived with a history of purposeful migration and a deep desire to be faithful. This is their story. 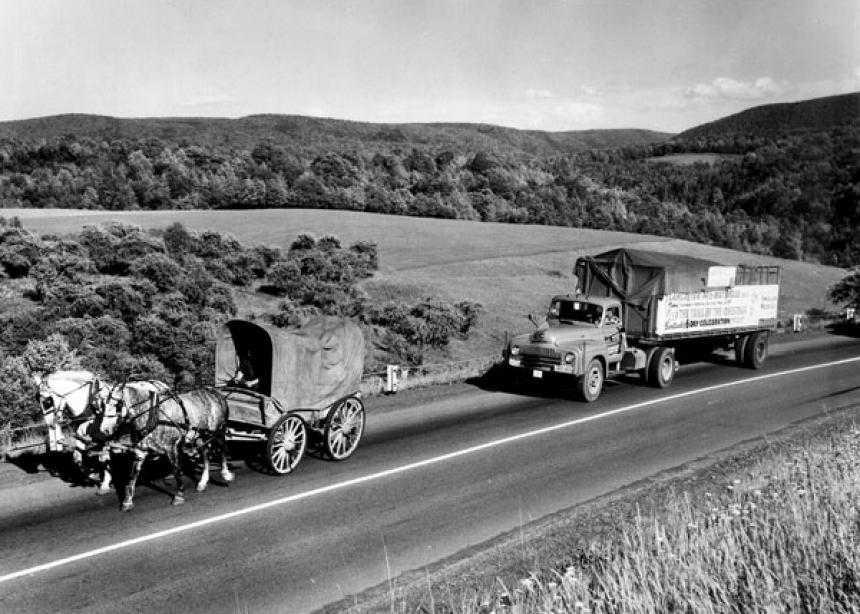 It is 1786. The first Swiss Mennonites have just arrived in Ontario, having travelled from Pennsylvania in Conestoga wagons. They crossed the mighty Niagara River by taking the wheels off their wagons, sealing the wagon boxes to make boats, and then floating across. Cattle and horses swam.

These immigrants initially settled along the north shore of Lake Erie and around Vineland in what today is called the Niagara Region. Within 20 years, other Mennonite immigrants settled further north on land that flanks the Grand River.

Around 1800—about the same time as the Dutch Mennonites were heading to Russia from northern Germany—more Swiss Mennonites came from Pennsylvania to what is now Waterloo Region. They came in search of land. They also came to get away from the aftermath of the American Revolutionary War of 1776. It may be overstating the case to say that they were United Empire Loyalists, but it certainly could be said that they trusted the British Crown more than they trusted the revolutionary state.

Richard Beasley, a land agent, had been asked by Joseph Brant, aboriginal leader of the Six Nations of the Grand River, to sell a portion of their treaty lands. Beasley helped the Mennonites negotiate this purchase, which later became known as the German Land Tract, an area surrounding present-day Kitchener-Waterloo that was first opened for settlement around 1800. By 1820, Woolwich Township to the north (Elmira and surrounding area) was also opened to Mennonite settlement. (See photos of an ancient road.)

Wilmot Township to the West (New Hamburg and vicinity) was opening up at this time as well. In the 1820s, Amish Mennonites led by Christian Nafziger came directly from Alsace-Lorraine, a region in France that is today bordered by Germany, Belgium and Switzerland. The Amish settled on 22 farms in Wilmot Township. Part of the group remained Amish (Old Order Amish), and today they continue to worship in their homes and live a plain and simple life. They use horse and buggies for transportation and eschew tractors on their farms.

At the end of the 19th century, the majority of them decided to build meeting houses. They made changes in lifestyle and in expressions of worship. Around 1920, they became the Ontario Amish Mennonite Conference (later Western Ontario Mennonite Conference), which integrated into Mennonite Church Eastern Canada in 1988.

Worry in Woolwich
Over a century ago, in 1889, some Mennonites in Woolwich Township became concerned about certain trends in the Mennonite church. They were suspicious of a strengthening Methodist-style revivalism, the introduction of prayer meetings, evening worship and Sunday school, and the use of the English language in worship.

From the parking lot of Elmira Mennonite Church today, you can see an Old Order meeting house on the adjacent property. On one Sunday this parking lot will be filled with horses and buggies. On alternate Sundays, it is used by the Markham-Waterloo Mennonites, who also rejected revivalism and Sunday school, but drive black cars only, instead of buggies.

In the 1960s, another division occurred when people again felt that we Mennonites were becoming too “worldly.” In this new Conservative Mennonite Church, men wore plain coats and women wore prayer veils. They rejected television, radio and wedding bands, and retained the use of the King James Version of the Bible.

Today there are at least 27 distinct Mennonite groups in Ontario. Their diversity is based mostly upon lifestyle and varying degrees of acculturation among a people whose original “habit of the heart” has made them “a people apart.”

From Russia . . . with love
In 1924, the first major wave of Dutch Mennonites came from Russia to Ontario. Local Swiss Mennonite families met them at the train station in Waterloo and hosted them, but significant differences between the two groups soon became apparent. The Russian Mennonites did not wear prayer veils, but they did wear wedding rings. Their worship style also differed and permitted the use of musical instruments.

Many of these new arrivals settled in other parts of Ontario, such as Essex County in the Leamington area, or migrated further west to Manitoba. Those who remained in Waterloo Region formed their own congregations, including Waterloo-Kitchener United Mennonite Church and Kitchener Mennonite Brethren Church. Initially, they also had small congregations in New Hamburg and what is now Cambridge.

In 1988, after decades of living and working alongside each other in southern Ontario, it seemed good to the Holy Spirit and to all of us that the three major Mennonite groups—the Western Ontario Mennonite Conference, the Conference of United Mennonite Churches in Ontario, and the Mennonite Conference of Ontario and Quebec—should integrate into MC Eastern Canada. After all, it was these three bodies, plus Kitchener’s Stirling Avenue Mennonite Church (affiliated at the time with the General Conference), that had cooperated in 1963 to form what today is Conrad Grebel University College. They also worked together in Mennonite Central Committee relief work and other projects.

Even newer Mennonites
Some of the newest Mennonites in Ontario share similar stories of migration. An influx of new immigrants began with the “boat people” of the 1970s, who were assisted by local Mennonites. This refugee and immigrant resettlement work formed some important relationships. Along the way, many of the new arrivals were introduced to Anabaptism. Some of these Latin American and Asian groups formed new Mennonite congregations within MC Eastern Canada.

Not the first
Any account of our life in this region needs to note our links to Canada’s Aboriginal Peoples, then to others who settled alongside us almost from the beginning, and in increasing numbers in subsequent decades.

Much of the land on which Mennonites originally settled was part of land grants by the British Crown to local aboriginals, which was to include six miles (9.6 kilometres) on each side of the Grand River. This was eventually reduced to the lands on the Six Nations Reserve near Brantford, which was was named after Joseph Brant, who worked diligently on behalf of his people in the midst of changing times and supported the British in the American Revolutionary War.

Benjamin Eby, a key Mennonite leader and an entrepreneur, came to the area—which was sometimes referred to as Sand Hills by early settlers, because of the dunes—to run a sawmill and a farm. He taught school and was also the pastor. Eventually, he became bishop of the Mennonite church in Kitchener, now First Mennonite Church. Because of his influence, Sand Hills was renamed Eby Town.

In the second quarter of the 1800s, many German people came to the area in search of new land and to escape the wars in Europe. German Lutherans and Catholics settled alongside the Mennonites. They spoke a dialect similar to the Pennsylvania German of the Mennonites.

Because of this strong German influence, Eby Town was renamed Berlin in the 1830s. Much later, when World War I broke out, the German place name fell into disrepute, and the city was renamed Kitchener, after a British general in the Boer War. There have been several attempts to revert to the name Berlin, but without success. The local German culture is celebrated annually over the Thanksgiving weekend with Oktoberfest activities.

In many ways, Waterloo Region is a microcosm of the wider Mennonite church represented by MC Canada, with all of its diversity yet united as a people of God.

I invite you to southern Ontario for the MC Canada assembly in Waterloo from July 4 to 8, 2011. Come and meet me at the Grand!

1. Generations of Mennonites have moved in search of land where they could live out their beliefs in communities of peace. How aware are you of your family roots where you live? How important is this to your sense of identity as an individual, a family and a church?

3. There are now more than 20 identifiable Mennonite groups in Ontario. Is this splintering of Mennonites a sign of vigour (they believed strongly enough about matters to debate them and even divide over them), or is it a sign of decay (people sticking to tradition which is faith “gone to seed”)?

4. The story of Mennonite immigration to Waterloo Region has many parallels for Mennonites. How might this history help us better understand newer immigrant groups that have more recently joined Mennonite Church Canada from Asia, Latin America, Africa and other places?

5. When we meet in assembly in July 2011, we will be on the German Land Tract, which was originally the land of the Six Nations people. How aware are you that we in Canada truly live in “our home and native land”? When we arrived, our aboriginal neighbours were our “hosts,” and we came as “guests.” Have we been good guests? 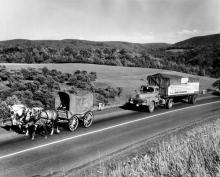 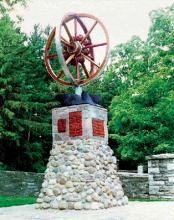 A cairn erected at The First Mennonite Church in Vineland in 1986 marks the bicentennial celebrations of the Mennonites’ arrival in Canada. (www.gameo.org photo) 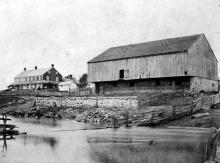 The homestead of Daniel and Veronica (Schneider) Martin (married April 8, 1823) at Wagner's Corners (on the west side of Weber St.) in what is now the north end of Waterloo, Ont. (Mennonite Archives of Ontario photo)