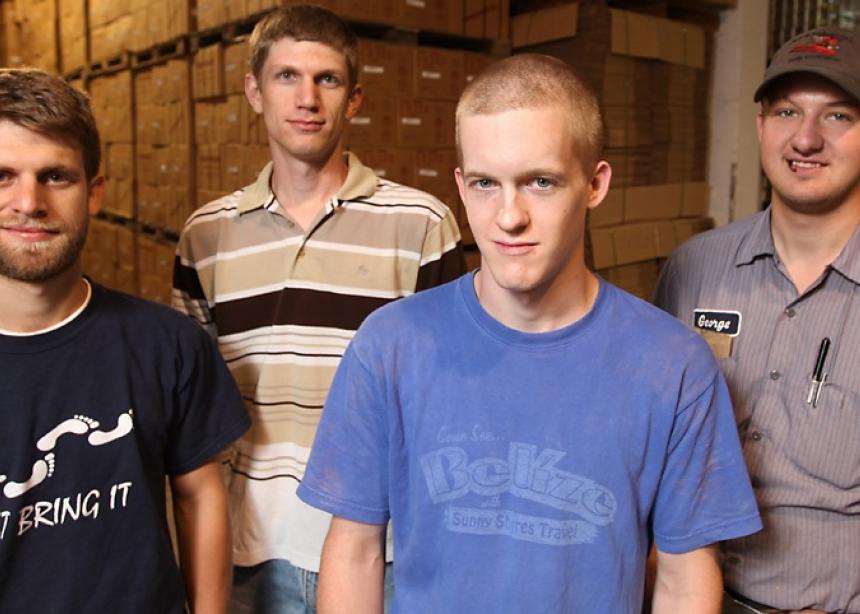 In 1997, when Martin Rahn heard that volunteers in an Ontario town were making plans to host a portable meat canner, his first thought was: “I need to stop this.”

Rahn, a food processing specialist for Canadian Food Inspection Agency (CFIA), was sure it would never work. Well-meaning volunteers packing meat with insufficient knowledge of detailed governmental safety laws – this was bad news.

Today, Rahn is one of several local food industry regulators who give annually of their time before, during and after the April arrival of the meat canner in Rahn’s own hometown of Leamington, Ont. Employees from canning plants in Leamington and people from churches of a variety of denominations are also key participants.

Every year, thousands of volunteers in Canada and the U.S. welcome a four-member Mennonite Central Committee (MCC) meat canning crew to their locales. Their shared purpose is to provide nourishment to communities impacted by war, disaster and malnutrition.

The 2010-2011 season began in October and continues through April. The canning crew is scheduled to stop at 32 sites in two Canadian provinces and 13 U.S. states this year.

At each site, the crew sets up the canner, a 42-foot long trailer, and oversees the cooking and packaging of meat to CFIA and United States Department of Agriculture standards.

The crew and volunteers fill more than half a million cans of meat each year. Last season, 519,000 cans of turkey, pork or beef went to 13 countries, including Canada and the U.S.

Members of this year's canning crew are Jeffrey Durksen of Filadelfia, Paraguay; Ryun Lawrence of Goessel, Kan.; Aaron Ressler of Tiskilwa, Ill.; and George Wieler, Jr., of Wheatley, Ont. Crew members commit to two-year terms, spending seven months on the road and, in the off-season, maintaining the canner and doing other duties for MCC.

Some of the work required before the canner’s arrival includes addressing Rahn’s initial concern – securing all necessary legal safety inspections. When a skeptical Rahn went to Guelph, Ont., in 1997 to see what it was all about, he found that the local canner committee was attending to the required details.

“They were talking to all of the right people,” he said.

Satisfied with the safety of the operation, Rahn became excited about the mission of the canner. He volunteered for two years at Guelph. By 1999, Rahn and others completed the ground work for hosting the canner and welcomed the canner to Leamington for the first time.

As in Leamington, volunteers comprise the canner committees in communities the meat canner visits. The committees coordinate the many details and volunteers needed to carry off the actual canning operation successfully.

For instance, committee members manage efforts to raise funds to cover the cost of canning. They also are available to jump in should an emergency arise.

Lawrence, a second-year member of the canning crew, recalls walking to the canner one morning last year with Wieler, only to discover that overnight, the truck’s main section had been stripped of its copper wiring. The local committee pulled together at an early hour, replaced everything that was taken or damaged and started operations by 8 a.m., just two hours late.

“That kind of took the edge off a bad situation,” said an appreciative Lawrence.

When such unanticipated needs arise, committee members may look to the larger community for help. Faith Kumher, co-coordinator with her husband Dave of the canner committee in Middlefield, Ohio, recalls one year when the usual site for the canning operation was unavailable. It did not take long to locate an alternative.

“Generous people let us use one of their facilities,” she said.

Another function of many of the committees is to look for ways to broaden their volunteer base.

“My part is to try to get more area churches involved,” said Dave Kumher. Currently, seven churches from a variety of backgrounds, plus Amish volunteers, take part in the Middlefield effort. The Kumhers and Rahn stress that anyone who would like to help is welcome, whether or not one is part of a church.

People become volunteers for many reasons. Faith Kumher identifies personally with the project’s purposes in a couple of ways.

“We were poor when I was younger,” she said. “I know what it was like to do without.”

Besides, she has known the canner for much of her life. As a girl, she went with her mother to help out with the canner when it came to town. She continues to see this project as worthy of her time and energy.

“I know I cannot conquer the world, but I can do my piece,” she said. “Our purpose is to serve others through [God].”