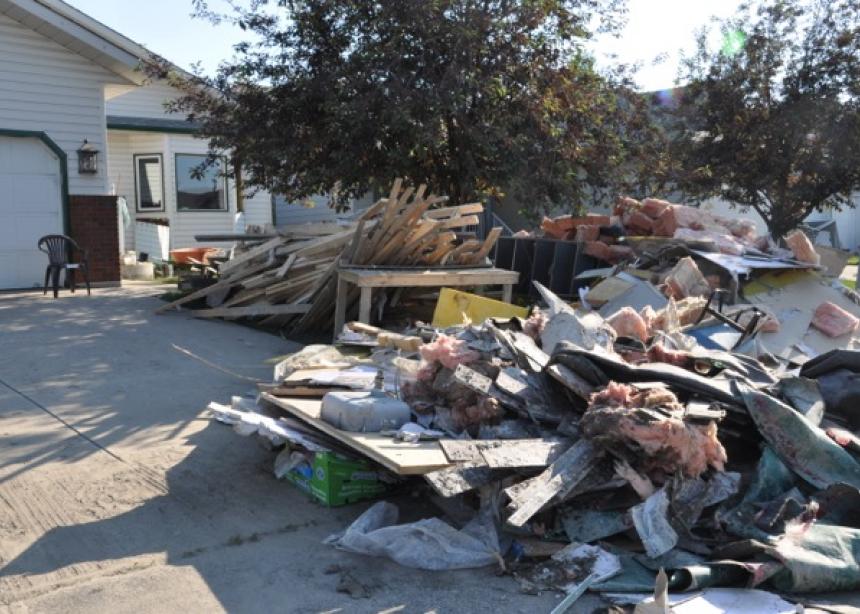 This is a typical scene Dyck encountered in the MDS clean-up. --MDS photo

Editor's Note:  The response to the flood disaster in High River, Alta, has been overwhelming.  Here Gerald and Lee Dyck, who spent a week there directing clean-up efforts, give a first-hand account of the their time there.  Dyck is the MDS director for British Columbia.

Turner Valley proved to be a turning point in the journey for Lee and myself.  How to get to High River?  The bridge was still out.  The bathrooms at the service station were propped open so they could dry, but the gas pumps worked.  We had to back track to get to our destination.

We arrived in High River to see the gravel from the rail bed washed to the other side of the high way.  The rail tracks were twisted into an artistic loop.  Boats were piled upside down on top of piles of debris and brush. Huge pumper trucks whined as their long tentacles sucked water out of basements and crawl spaces. The mountains of furniture and sodden debris rose on the curbs at each home.  A film of yellow gray mud covered most of the town.  The scene was surreal.

Evelyn Rojas-Peters called on Friday, July 6,  and invited Lee and me to go to High  River to assist with leadership and volunteer registration.  We left on Saturday and arrived in Okotoks on Sunday. We were hosted by Doug and Rita Janzen.  The 10 minute drive to HR was very convenient and the hospitality such that the spirit was revived each evening.  Thank you Doug and Rita.  And thank you Jim Dyck for the smooth transition in working with Glen Williamson.  Jim showed a confidence and patience in all of his leadership.  Who else could make so many people smile, despite the rails having come off the ground in HR. (literally) His sense of humour set everyone at ease.

The three people who were the anchors for the MDS scene at HR were Doug Janzen, Gene Lobe and Doug Boyes.  I think that they had been on the ground leading and working for two or so weeks.  Their own lives had been put on hold and it was good for Lee and I to be there to give them a hand.  Lee initiated volunteer registration and job cards.  Some of the folks that were helped were skeptical of signing their names for fear of a scam.

One of the other organizations that had little experience had removed bearing walls in a couple of homes.  This was caught on time, averting an incident.  This brought home the fact that the job cards and experienced crew leaders were important.

The huge scope of the HR flood (80% of homes flooded, 16,000 people in HR)  coupled with the many groups helping to clean homes clarified the way MDS works.  I came to the conclusion that we address needs and then match the needs with volunteers.  At least most of the time.  I was very happy with the positive week we had.  Volunteers came from churches and businesses, from Alberta, Saskatchewan, and BC.  Clients were amazed at the industrious volunteers who made two-day jobs turn into a one-day event.  Our MDS volunteers worked together with volunteer from other groups, often without that being planned, however with a graciousness that “made it happen.”

I was pleased to have a core of leaders who served in that capacity for the five days that Lee and I were there.  This aided in the efficiency of each day.  Thank you leaders.

Glen Williamson was one of those leaders.  His background is hockey coaching.  He proved to be great at getting jobs, connecting with the clients and assisting with the grouping of the crews that would assemble.  We would tour the town, visit with some of the clients, he navigating and me driving.  It was great teamwork.  I was so appreciative of that.  It made the job doable.  He has a slow and gentle demeanor on the phone, inspiring confidence in the party on the other end.  It was very easy to work together with Glen. I found that my role was to do the safety talk, pick crew leaders, do a send off prayer, and meet and greet the folks as they came to the staging ground and as they came for lunch or at the completion of the day.  I would say that most of our day to day volunteers were first timers to MDS.

Our staging ground was set on the Rodeo Grounds. Our three tool trailers formed a U. Doug Janzen set up his large portable tent roof, protecting us from the sun and rain.  Our ground was grassy, and so was rather clean, as opposed to the first day in the mud.

On occasion, volunteers would come well after our crews were already at work and I would ask them to check in with some of the other groups.  I had a very clear sense volunteer/leadership/client need capacity.  I think that we maxed out on Thursday with 40 volunteers.  Some volunteers that day were invited to try at Mission Possible.  They seemed to take anyone at anytime.

The on going need for leadership bought some names to mind.  Lee has already sent the names for a couple of CCP’s to Janet.

One of the crew leaders, and a new person to the MDS world was Ron Bushman from Saskatoon. (West Portal MB church) A retired master heavy-duty mechanic, he came to the job site with every imaginable tool that one might need.  Although soft spoken he tackled any job given to him and proved a very capable crew leader from day one.  He indicated that he was interested in staying about two weeks. (I checked with some of the Alberta folks and they thought that he would be a good leader)  I checked with Glen if he would like to work together with him for a couple of days (3) and he was fine with that.  Checking in with Ron, he said he would be OK with being a project manager for a couple of days.  I liked his send off prayer on Friday, where he segued his prayer with a set of jumper cables, saying that prayer was like connecting with us with the power of God.  (a mechanic, you say)

Two other people who came in time to fill a need were Kathleen and her daughter Megan. (Megan is 16) They looked after registration and job card follow-up.  I spent a couple of hours telling them about MDS and how it worked.  Kathleen had brought a couple of hot meals for the crews as well.  I hope that they will find their way to the trailers this week as well.

Trinity Mennonite Church was so encouraging with their hot meal program.  The volunteers would come to the staging site each lunch hour for a tasty hot meal. This was a time  to hear each others stories of the morning events and to get to know each other.

The arrival of the blue MDS shirts was a much-needed boost to the image and  branding of MDS.  The little MDS sign on my polo shirts was often the beginning of conversation, and certainly created trust, I would recommendthat all leaders have shirts and hats displaying the symbol that we are all proud of.

I cannot say enough good about the folks who worked, supported, led in this endeavor to help High River.  I am so thankful!  I think of the new folks who have been introduced to the world of MDS.  New CCP’s, and new project managers.  I look forward to seeing the camp that Les Rempel envisioned for us to start the next step of putting the homes together.  Three days later I still say,”Oh WOW, that was so good!”

This is a typical scene Dyck encountered in the MDS clean-up. --MDS photo 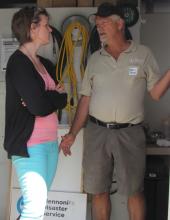