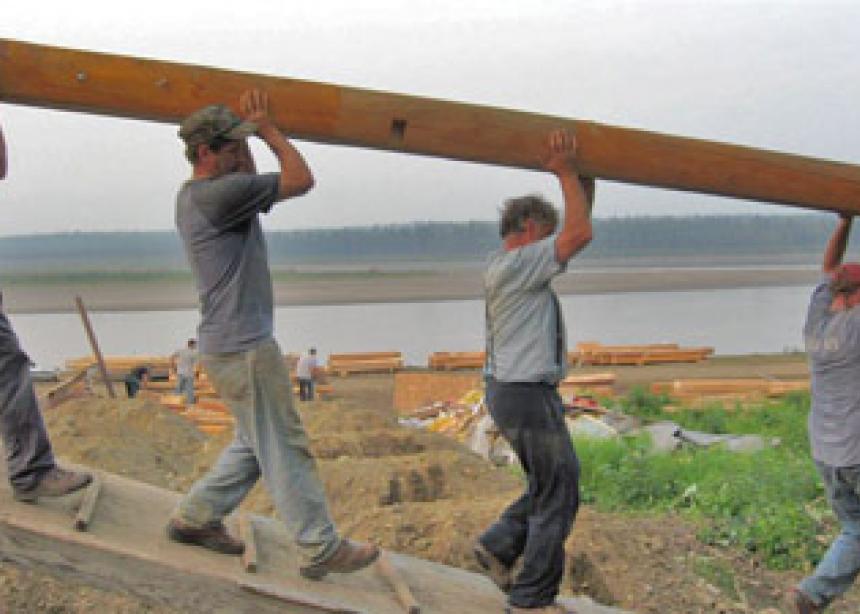 Last spring, Mennonite Disaster Service volunteers did something new after serious flooding along the Yukon River in Alaska destroyed many buildings in the town of Eagle: they built log homes for the victims—13 in less than 11 weeks.

After 60 years of building homes for other people, Mennonite Disaster Service (MDS) is doing a little building of its own.

The years of trying to run the operation from a two-storey house in Akron, Pa., will soon be a thing of the past, as plans for a $3.3 million, 1,300-square-metre warehouse and office space are underway in Lititz, Pa. The warehouse will store recreational vehicles, equipment and supplies, said executive director Kevin King at the annual MDS all unit meeting in Warman, which focused on the organization’s six decades of service..

“Before [Hurricane] Katrina, [the house] was fine; after Katrina, things just exploded,” explained Lois Nickel, director of region relations and programs in Winnipeg, in referring to the enormous effort needed to meet the largest catastrophe with which MDS had ever worked.

Al Yoder, incoming board chair, agreed. “Phenomenal changes happened because of Katrina,” he said, adding, “We are not the same organization.”

In fact, the organization, based in Akron, Pa., is about more than just coordinating volunteers in disaster-ridden areas of North America. Its foray into post-secondary education means that two Mennonite universities now offer disaster management programs. One, at Hesston College, has been running for five years. The other, only two years old, is taught at Canadian Mennonite University, Winnipeg.

“Without the commitment of long-term volunteers, we ‘short-termers’ would not have had the opportunity to learn what we did [on the job site],” said CMU student Marlis Schacht.

A fourth and sometimes struggling arm of MDS is its annual youth project. Organized every summer in different regions, the youth focus is a chance for teens to become involved.

During the Region 5 (Canada) report, co-chair Rod Enns referred to an upcoming project taking place this year in Saskatchewan. Normally a one-month venture, this summer’s project will extend over two months and involve linking up with a drug rehab program called Rock Solid Refuge in Shaunavon, where the youths will build a large centre for further rehab work. The summer program is “very important to us,” Enns said, adding, “It’s always a challenge to find meaningful work for young people.”

Abe Enns from Winkler, Man., explained in depth about the program from the board’s perspective. “Our biggest issue right now is our youth projects,” he said, noting, though, that the organization must be careful in dealing with labour laws that vary from the U.S. to Canada. “There are concerns with liability issues over youth on construction sites,” he added.

One of the disaster response projects accomplished last year took volunteers to Alaska when an unusual freeze-up on the Yukon River in the spring provided a unique opportunity to MDS. In the town of Eagle, an ice jam caused serious flooding and the community needed nine homes built in 10 weeks. Because the growing season is very short there, the residents, who live close to the land, needed extra help to rebuild their lives. Although MDS had never built log homes before, and although it is normally difficult to get volunteers in the summer, 77 people showed up to help and the group built 13 homes in just under 11 weeks.

Amos and Elizabeth Martin from East End, Pa., joined their first MDS assignment eight years ago in Arkansas. Since then, they have come faithfully to the annual meetings.

“It’s like a pep rally, like a family reunion,” said Nickel of the all unit meetings, where reports of projects and challenges from all across North America are shared.

A better description would be hard to find for the many different kinds of Mennonites happily visiting in the church foyer between sessions. According to Nickel, MDS is supported by at least 10 different Anabaptist groups on the continent.

Mennonite Brethren swap stories with Order Orders about shared experiences at different worksites. Everyone here has at least one thing in common besides their Anabaptist roots: They have all worked in some way for MDS, creating yet another unifying bond.

Last spring, Mennonite Disaster Service volunteers did something new after serious flooding along the Yukon River in Alaska destroyed many buildings in the town of Eagle: they built log homes for the victims—13 in less than 11 weeks.