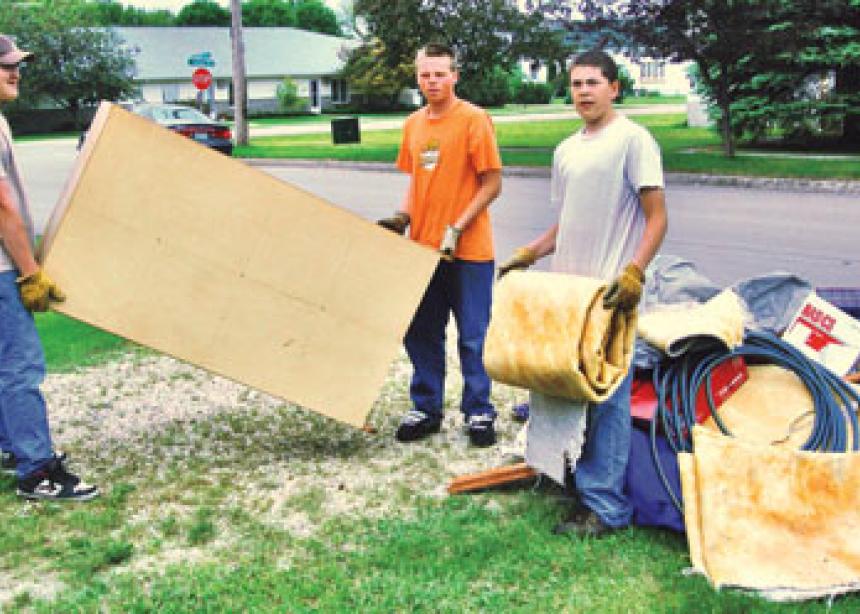 On May 29, 10 centimetres of rain fell in an hour on the small border town of Emerson. By the end of the day, more than 15 cm had come down. With the ground already saturated, the rain had nowhere to go, flooding most of the basements in town.

“It varied from home to home, but some had as much as [1 to 1.2 metres] in their basements,” said Jeanette Sabourin, town administrator.

A power failure affected part of the town as well, disabling any sump pumps. The mayor declared a state of emergency for the town.

“On Monday [May 31], within an hour-and-a-half of being called, Mennonite Disaster Service [MDS] was in town,” said Sabourin.

By June 1, 38 volunteers from Steinbach, New Bothwell and Altona were already cleaning out basements.

Dan Klassen, chair of the Manitoba MDS unit, said the quick response “was just part of our protocol.” On May 30, when he heard of the record-setting rainfall and extent of the damage, he began phoning board members. He brought his truck into town, hung out the MDS shingle and turned his truck into a temporary office.

Emerson, with a population of 689, had about 80 percent of its 300 households flooded.

“Most have minimal insurance and some don’t have any,” said Sabourin.

Klassen put out calls to the supporting churches for volunteers, and by the end of the first week he had assisted 80 volunteers in cleaning out 35 homes. “There are about 45 homes on the list, and if all goes well we should have the clean-up finished after this week, and then we can wash and spray for mould next week.”

Klassen, a member of Altona Sommerfeld Mennonite Church, drives a water truck for a spraying company. “I have excellent employers who support me in this,” he said of his work with MDS. “Some of them even volunteered to take my shift so I could be here.”

A week after the deluge, the boulevards of this quiet community were piled high with the wreckage from one basement after another.

Homeowner Leanne Nichols looked overwhelmed and devastated as she surveyed the damage in her basement. Her 15-year-old son’s bedroom was destroyed by the water. But Klassen gave instructions to the Altona Sommerfeld Mennonite youth group, who quickly emptied out her basement.

As motorists drove by, their occupants honked and waved to Klassen, having seen him working every day for a week. “It’s unbelievable,” said Klassen. “Everyone greets you happily.”

For Sabourin, that is not so unbelievable. What’s unbelievable, she said, was how quickly MDS was there to help. “I have heard a lot people say, ‘After this, we’re going to give [MDS] a donation,’?” she said.

Near Brandon a twister touched down and three homes in Winnipeg were also referred to MDS for investigation, Klassen noted. The work in Emerson was completed by June 9, with about 100 volunteers in total having responded to the call.