July 2, 2014 | God at work in the World | Number 14
Story and photos by Donita Wiebe-Neufeld | Alberta Correspondent 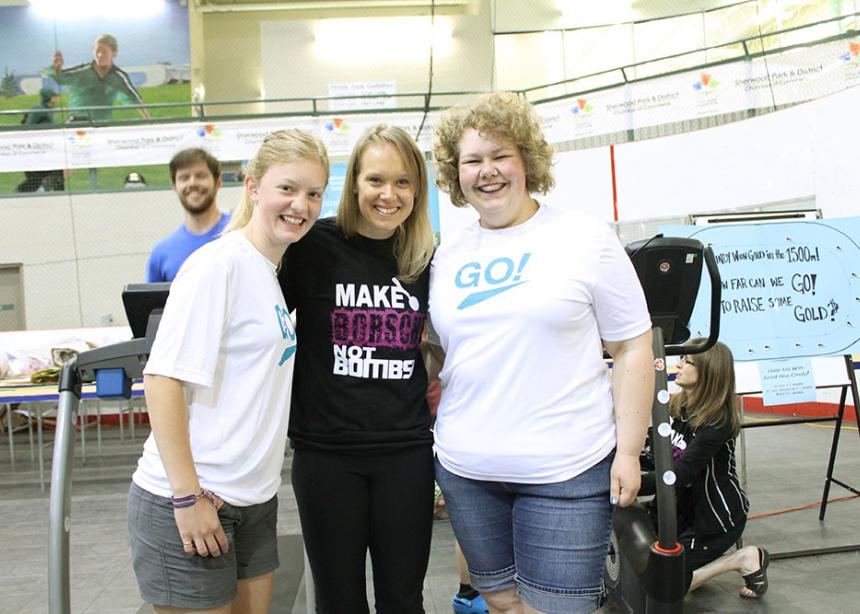 Hannah Martens (left), Cindy Klassen, and Rebecca Janzen enjoy each other’s company at the “GO” booth where Martens and Janzen earned money for MCC by running and biking on the stationary equipment.

Alberta Mennonites have few opportunities for large fellowship gatherings. While the annual Mennonite Central Committee relief sale is a huge amount of work, when the weekend arrives, the atmosphere is decidedly celebratory.

On June 6-7, MCC supporters gathered in Sherwood Park from as far north as La Crete, and as far south as Pincher Creek, to raise funds for relief work, to renew acquaintances, and to enjoy the stimulating atmosphere of a diverse crowd united in serving God. For Barry Andres, chair of the organizing committee, it was his third time at the helm. Asked how the sale went, he replied; “Really well. The overall sense I’ve had is being overwhelmed at people’s willingness to be involved.” He noted that “involved” goes far beyond the generous financial giving, with many volunteers giving extraordinary amounts of time and skills for the cause.

A highlight of the 2014 event was the presence of Cindy Klassen, a Canadian long track speed skater with six medals to her name. Klassen, a Winnipeg native with Mennonite roots, is a strong supporter of the work of MCC. “The organization is awesome. They are being the hands and feet of Jesus around the world. Everyone involved with MCC has made me feel like family.” Klassen said. Klassen was available throughout the day Saturday, visiting with people, encouraging participants using the treadmill and bike to raise money at the “GO” booth, and speaking with young people over lunch.

Inevitably, arranging a sale of this magnitude, coordinating hundreds of volunteers, sale items, food, and facilities involves challenges. Abe Janzen, director of MCC Alberta, is hopeful that organizers for the three sales locations in the province, Edmonton, Coaldale, and Didsbury, will be able to get together before the next sale to discuss the issues and opportunities at each venue.

Andres says that marketing to expand participation to include local people is tricky. The auction itself can sometimes be confusing when purchased items are donated back to be resold, or a feature quilt, such as the “water quilt” this year, is simply an opportunity to donate to a cause. “What’s become apparent is that it is a difficult event to attract people who are not already part of the cause. Who would go to an auction where you spend $1,000 and then don’t take anything home?” Andres said.

The 2014 sale raised approximately $175,000, a slight increase over the amount raised the last time Summerfest was held in Sherwood Park.

Hannah Martens (left), Cindy Klassen, and Rebecca Janzen enjoy each other’s company at the “GO” booth where Martens and Janzen earned money for MCC by running and biking on the stationary equipment.