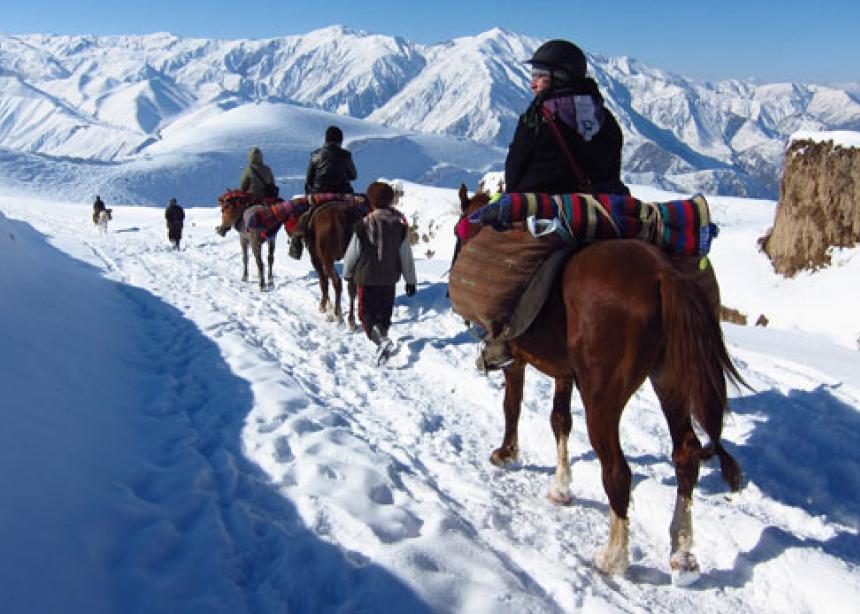 To deliver nutritional care to young children and expectant mothers in remote areas of Afghanistan, the staff of Medair, a Swiss faith-based nongovernmental organization and a Mennonite Central Committee partner, have to travel by horseback in the winter.

Traumatized women receive counselling. Students learn skills to constructively deal with conflict among their extended families. Malnourished children are fed, and their mothers are offered health, nutrition and childcare information.

“Afghanistan must be one of the most challenging countries in which MCC has program,” the Williamsons wrote from Kathmandu, Nepal, where they are based. “Land degradation, poor governance, poverty, malnutrition, war, gender inequality—in any category of human development, Afghanistan is struggling. God’s love and compassion is sorely needed here.”

In eight middle schools in Paghman District, an outlying area of Kabul, classes of seventh- and eighth-graders role-play or use puppets to enact common daily conflicts, which they discuss afterwards. Sixteen role-plays are contained in a peace education curriculum developed by Help the Afghan Children, an MCC partner. Through the lessons, students learn how to apply the principles of listening, understanding, mediation, and respect for elders and for one another in their own conflict management.

MCC’s Global Family education sponsorship program supports Help the Afghan Children’s peace programs and computer and environmental education. These eight schools were chosen because they encourage the attendance of girls.

Global Family also supports the effort of another partner, Le Pelican, which provides schooling for children who would otherwise be working, literacy classes for older girls and women, education for people who are deaf and mute, and vocational trade classes.

Under tents in the remote, deforested Badakhshan province, Ruhulla and his wife Gul (pseudonyms) work together to conduct a nutrition clinic. Ruhulla assesses malnourished infants, measuring weights, heights and arm circumferences. In a nearby tent, Gul checks and counsels pregnant and lactating women.

The couple has been working for nine years with MCC partner Medair, a Swiss faith-based nongovernmental organization. The love and care they demonstrate while working with mothers and children is evident, the Williamsons said.

The need, too, is obvious: “We were told that this area has the highest maternal mortality rates in the world and that 60 percent of babies under one year are malnourished,” they reported.

MCC’s work with Medair is supported by MCC’s account with the Canadian Foodgrains Bank.

Afsana (pseudonym) was forced to separate from her husband, and she and her children had to move out of her in-laws’ home. Instead of having an extended family to rely on, she needed to find food for herself and her children. She told the Williamsons that she became so stressed that she beat her children and forgot that she put food on the stove to cook.

The Women’s Activities and Social Services Association chose Afsana as one of 45 women in five districts to participate in a trial women’s trauma-healing project. As a result of counselling and medication she received at a different clinic, Afsana told the Williamsons that she no longer beats her children and she remembers what she’s doing. She reaches out to other women to share what she is learning, despite community leaders who discourage women from meeting together.

The association was founded in 2002 by a graduate of Eastern Mennonite University’s Center for Justice and Peacebuilding, Harrisonburg, Va.

To deliver nutritional care to young children and expectant mothers in remote areas of Afghanistan, the staff of Medair, a Swiss faith-based nongovernmental organization and a Mennonite Central Committee partner, have to travel by horseback in the winter.