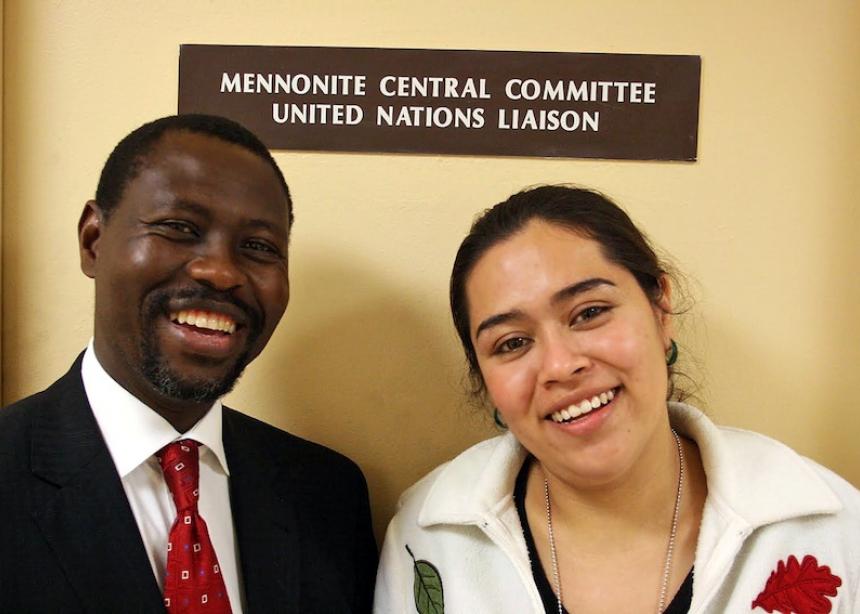 The Rev. Mautji Eloridge Pataki, general secretary of the South African Council of Churches, met with Keyla Cortez Vanegas, a Mennonite World Conference intern at MCC U.N. Office, to encourage her while he was in New York City for a meeting. --Doug Hostetter photo

As a Christian who takes her faith seriously, Keyla Cortez Vanegas was shocked by New York City’s secularism when she arrived there in August. Cortez Vanegas belongs to Esquipulas Brethren in Christ church —one she describes as “traditional”—in a small Nicaraguan town.

Her U.N. position, however, is a comfortable fit. Having studied international relations, Cortez Vanegas is meeting people from around the world and immersing herself in a range of current issues. She sits in on working groups of nongovernmental organizations (NGO) dealing with Palestine and Israel relationships, Colombia, and food and hunger. The working groups meet to remain current on events and to strategize ways to advocate on behalf of those who suffer injustice and poverty.

“Keyla brings her Spanish language skills (Spanish is one of the U.N.’s six official languages), which facilitate communication with Latin American diplomats and guests,” said Doug Hostetter, director of the MCC U.N. Office. “She also brings a Latin American cultural and religious perspective that enriches our office and informs MCC’s work at the United Nations.”

Recently Cortez Vanegas helped with logistics for a two-day seminar that brought about40 students from Canadian and U.S. Anabaptist colleges to the United Nations.

“I love my job because I am getting a chance to know and share with so many people, and I’m learning a lot,” Cortez Vanegas said.

The September U.N. General Assembly awed Cortez Vanegas, seeing people from so many countries gathered together. The security level rattled her a bit—the many police and armed guards, even sharp-shooters on nearby roofs.

During Cortez Vanegas’ first months in the U.S., while she longed for familiar foods and faces, she was comforted by an IVEP alumnus, who had been in the program 20 years earlier. The Rev. Mautji Eloridge Pataki, general secretary of the South African Council of Churches, was in New York for a World Council of Churches meeting.

Rev. Pataki told her his story of homesickness as a South African in Winnipeg, but he also said his IVEP experience at Canadian Mennonite Bible College changed his life. It led him to attend seminary, to become a pacifist and to engage in church-level peace and justice initiatives, which has become his life’s work.

“He took a lot of time to come, but he helped give me strength,” Cortez Vanegas said. “He told me I would learn much about my spiritual and personal life.”

Pataki’s observations are spot on. As Cortez Vanegas views New Yorkers’ lives, she weighs her Christian values against those she sees. She admires the professional work ethic that she sees when people give even more than is required of them to their work, but she is less impressed with the hurry-scurry. “They worry about many things, but not necessarily about giving time to God,” Cortez Vanegas said.

She misses the close family ties of her hometown of Esquipulas, located about 15 minutes from Managua, Nicaragua’s capital. This is where she attends a close-knit, small church of about 100 members, many of whom pray for her regularly. Her church is part of the Asociación Misión Evangélica de los Hermanos en Cristo en Nicaragua (Brethren in Christ Church in Nicaragua), which is a member of MWC.

In Nicaragua, she lives with her mother, who is part of the church’s board of directors, her step-father, 10-year-old sister and 19-year-old brother. Just doors away are her two grandparents, four aunts and uncles and five cousins.

About three years ago, when Cortez Vanegas was a junior in high school, her pastor told her about a small nongovernmental organization, Comisión de Paz y Justicia (Peace and Justice Commission) of the Nicaraguan Mennonite and Brethren in Christ churches,* that needed help editing its newsletter. Working there, her interest in the worldwide Mennonite church grew, she said, leading her to the joint position with MWC and MCC.

When she completes her internship in July, Cortez Vanegas would like to work for a nonprofit organization, preferably one that assists children. She envisions working in administration and advocacy, procuring needed resources, rather than hands-on care.

The Rev. Mautji Eloridge Pataki, general secretary of the South African Council of Churches, met with Keyla Cortez Vanegas, a Mennonite World Conference intern at MCC U.N. Office, to encourage her while he was in New York City for a meeting. --Doug Hostetter photo

It was nice to see the article about Keyla Cortez meeting Rev Pataki, Gen Sec of SACC. Rev Pataki stayed in our home for the year that he was in Winnipeg. He became a close friend of our family and in 2003 we visted him and his wife and children in S. Africa. Mautji's assignment was at the MB Archives and Library at Concord College (before it became federated with CMU).