MCC gifts to Japan will aid clean up, trauma healing 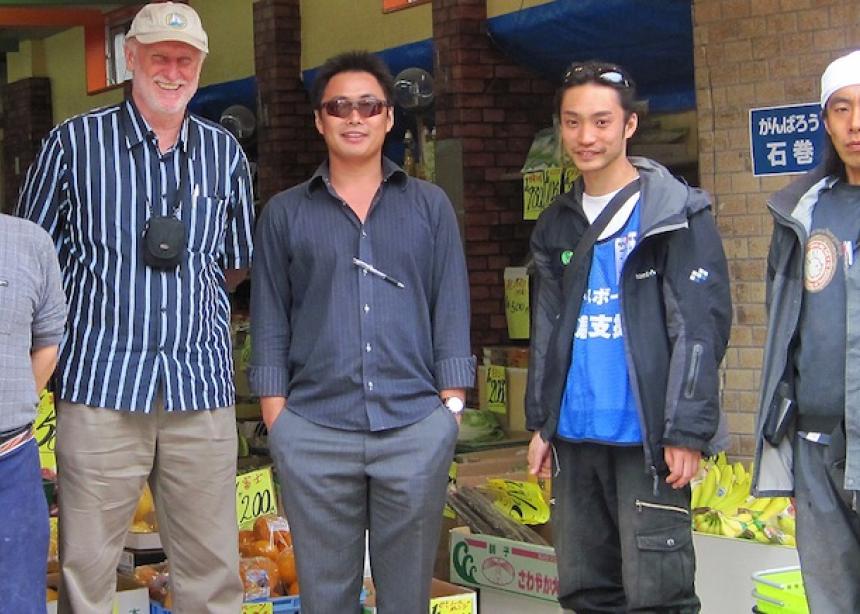 Japan in May, MCC director of Food, Disaster and Material Resources Willie Reimer was reminded that response to disaster must be personal and address individual trauma, however massive the tasks demanded by the surrounding devastation.

Reimer made two journeys in Japan, one with Church World Service (CWS) colleagues, and one as part of a delegation led by Mennonite World Conference (MWC). He quoted Takeshi Komino, who heads emergency response for CWS Asia/Pacific, “This recovery requires human-to-human interaction – it is not just task oriented.”

Supporters in Canada, the U.S. and around the world have given more than $924,000 through MCC to the people of Japan affected by the March 11 9.0-magnitude earthquake, subsequent tsunami and rupturing and meltdown of Fukushima Daiichi nuclear power plant.

MCC will channel the gifts to the work of trusted partners in Japan, including CWS and the Anabaptist churches of Japan, through MWC. MCC has no program, staff or direct partner organizations in Japan.

The confirmed death toll from the disasters is more than 15,000 people; 9,000 remain missing. Hundreds of thousands more were displaced from their homes, and 109,000 remain in evacuation shelters.

Reimer saw minimal earthquake damage to buildings and infrastructure in the northeast coastal area. “Generally most buildings withstood the quake. But the tsunami was different. It smashed over protection walls and caused widespread damage, destroying buildings and infrastructure in its path, 1 to 3 kilometers inland. In narrow valleys, the wave traveled up to 10 kilometers. Many of the factories along the coast were destroyed, leaving many jobless. Five hundred kilometers of coastline in three prefectures (like a province or state) is affected.”

Reimer said the funds given to MCC will help with recovery in at least two ways, including forwarding $700,000 to CWS. CWS is part of a coalition of 29 Japanese nongovernmental organizations, a few international NGOs and three government ministries.

The money will support CWS efforts to provide hot meals and nonfood items; to clear debris from evacuation sites, homes, schools and shops (it is estimated that it will take two years to clean all structures affected by the tsunami); to train volunteers in basic trauma response skills to work alongside trauma response professionals; and to provide help as residents access support services.

With MWC, MCC will use the gifts of money to find and support ways to “listen to and respond with the Anabaptist communion in Japan through this time of great need,” said Reimer. “Japanese Mennonite, Brethren in Christ and Mennonite Brethren congregations have a high desire to respond to their neighbors’ needs.”

Japan is home to five Mennonite, Mennonite Brethren and Brethren in Christ groups, which include about 3,100 baptized members in 71 congregations. The Japanese Mennonite Fellowship has formed a relief assistance committee and is assessing best ways to respond.

Before the disasters of early March, Japan ranked as the third largest global economy following the U.S. and China. Though experts are optimistic Japan’s economy will recover, the short-term outlook is economic decline.

“While Japan has significant resources to respond to the disasters, their magnitude is so extensive that any country would have a difficult time to address the situation,” Reimer said.

While he is encouraged by positive aspects of the response – including effective early distribution of critical relief items; collaboration between government, civil society and the private sector; and steady progress on physical improvements – he sees significant challenges in the recovery process.

“It will be difficult to find enough volunteers for the work as time passes. It is a challenge to secure good locations for temporary homes. Factories and shops were destroyed; people’s livelihoods need to be recovered. Trauma is widespread and often hidden and the number of people with post-traumatic stress disorder is enormous. Human-to-human contact and assistance is necessary and should accompany all the urgent tasks required. Much more attention needs to be given to trauma work,” said Reimer.

People may contribute to Japan disasters response by sending a check (marked “Japan”) to the nearest MCC office, or by giving online at https://donate.mcc.org/project/japan-earthquake-response or by phone (Canada toll free 1-888-622-6337).