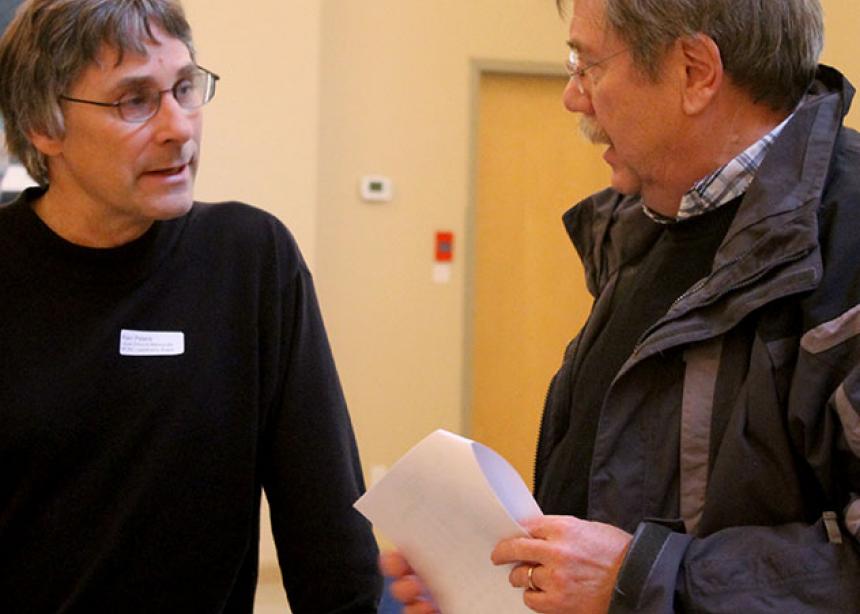 The future direction of Mennonite Church B. C. was the main topic for delegates to the special fall meeting of the area church at Langley Mennonite Fellowship on Nov. 2.

Future directions in budget dominated the agenda. Moderator Lee Dyck reminded the delegates that, at last February's annual meeting, they agreed the area church needs to raise more money, so the Finance Committee came up with the idea of last month's dessert fundraisers. (See "Desserts raise funds for MC B. C., " Nov. 11, page 23.) She said of those events, "Twenty-five thousand dollars [the amount raised] is great, but it's not enough. "

"Or the fourth option, " quipped Peters: "not pay the bills! "

Finance Committee member Randy Redekop said the committee is willing to make an effort to provide more information about MC B. C.'s ministries and create healthy conversation, in an effort to increase individual and congregational giving.

Also discussed was the future direction involving programs with B. C.'s indigenous peoples. Indigenous relations coordinator Brander McDonald relayed thanks to Mennonites for their support during the recent Truth and Reconciliation Commission (TRC) activities in Vancouver. He noted with gratitude that more than 300 Mennonites took part in the TRC walk of support, and said he is thankful for the opportunity to visit churches and participate in dialogue circles.

Agreeing that the position is a valuable one, delegates passed by an overwhelming majority a motion to extend the indigenous relations coordinator position from Jan. 1, 2014, to Feb. 28, 2017.

A special resolution approving Chinese Grace Mennonite Church borrowing funds from Mennonite Foundation of Canada for renovations was passed, necessary because the property title is held by MC B. C.

The final topic on the agenda was a report by April Yamasaki and Aldred Neufeldt of the MC Canada Future Directions Task Force. They noted that the church is living in a time of change, which all denominations in North America are facing. Mennonites continue to donate generously, and donations are increasing, although the peak year of giving was more than two decades ago, in 1991.

The task force, they said, is looking at the larger picture and asking, "What is God's Spirit calling us to in the 21st century? " and, "What are the best ways [programs/structures/strategies] for the church to thrive and grow? "

Commented Garry Janzen, the area church's executive minister, a place to begin is to "love one another from the heart. " 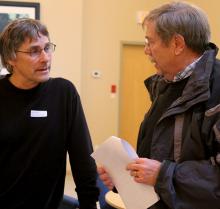