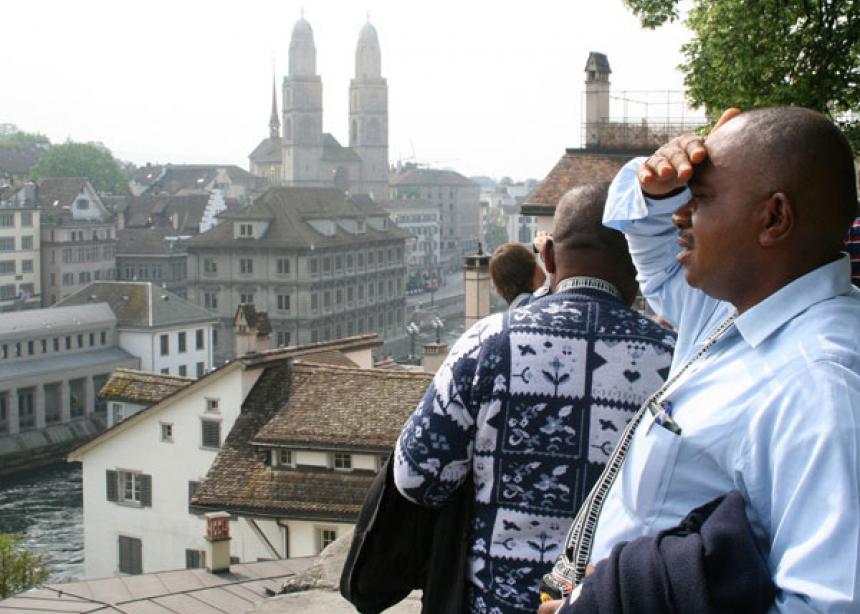 Pausing by the statue of militant Reformed Church leader Ulrich Zwingli on a tour of Zurich during Mennonite World Conference (MWC) General Council meetings last month, the delegate from the Evangelical Mennonite Church of Burkina Faso notes that how a Christian responds to trials can have long-lasting effects. His own experience started in his Muslim family; as the oldest of 23 children, he suffered for 17 years after he became a Christian because his father did not consider Christians to be pure.

Bienenberg Seminary history professor and tour leader Hanspeter Jecker notes a tension that has accompanied Anabaptists around the world in their interactions with neighbours or the state since Anabaptism started in 1525. Does one be radical and leave, or stay and work for local change?

Bananzoro stayed and worked for change in a different way than Zwingli, whose statue depicts him with a Bible and a sword, representing his death in battle. (See front cover.)

“My dad even totally changed his mind,” Bananzoro says. “What he noticed from me is totally different from what he thought about Christians.”

Although Bananzoro’s father is still Muslim, 10 of the 23 children are now Christians. “My father says to his children, ‘If you cannot be a good Muslim, follow your older brother,’” Bananzoro says.

On working to bring people to reconciliation in his West African context, Bananzoro stresses that a Christian should be a witness because people trust what they see more than what they hear. “People can really persecute you,” he says. “If you don’t fight back—even if you don’t succeed—people will understand and say your God is powerful. This is why we should not fight back.”

Most of the 175 MWC tour members had never been to Switzerland before. Walking in the footsteps of early Anabaptists in places like Schleitheim and the secret “Anabaptist cave” tucked behind a waterfall near Baritswil is a powerful experience.

The outing is of significant value to Ambroise Kabeya Kanda Mwanda of the Democratic Republic of Congo. “It is a big discovery to be here, to get to know my origin of Anabaptism,” he says while standing on the present bridge at the location where authorities read Felix Manz’s death sentence, the penalty for performing renegade adult baptisms. “I have read a lot in books, but to be in it, present here, to see the places, means a lot to me.”

His countryman, Joly Birakara Ilowa, echoes similar sentiments while looking out over the Limmat in the direction of where Manz performed that first baptism on Jan. 21, 1525. “If I were not already baptized, I’d like to be baptized here,” he says.

Francisco Martínez, president of the Brethren in Christ Church in Cuba, reflects on the relationship of his church to early Anabaptists and a heavy-handed government after visiting Zurich and Schleitheim. Schleitheim is where Michael Sattler led the first Anabaptist assembly on Feb. 24, 1527, resulting in the Schleitheim Confession, a watershed document articulating a distinctly Anabaptist confession of faith. Sattler was executed a few months later, in May.

“To be in Switzerland is to continue the legacy that Christ planted and sowed in the hearts of a group of people who became martyrs for following the teachings of Jesus,” Martínez says. “It feels like a privilege to walk freely in these streets where there were men and women who confessed the same faith we do and suffered oppression because of it.”

He knows a bit about that. Missionaries brought Christianity to Cuba, but after the communist revolution, pastors and church leaders were mistreated and forced to do hard labour.

“Intelligent, wise Christians were not able to complete higher education and be appointed to jobs for which they were qualified,” Martínez says. “Our situation has been improving since the 1980s, though there are still restrictions.”

Nearly half a millennium has passed since the first Anabaptists took new steps of faith in Switzerland’s hills and valleys. While the lives of the European founders remain in the past, their spirit continues today around the world.

“Everything I learned, everything I saw, I am taking back,” says Madeleine Mvele Kikoso Mvele of Kinshasa, Congo. “My daughter has studied and had training, and I will show her. We, as Anabaptists, have come a long way.” 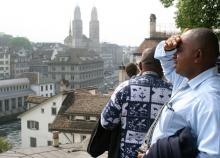