A long row to hoe for an urban farmer

These words of Ellen Davis from Duke Divinity School reflect Kenton Lobe’s strong attachment to the land and his passion for agriculture. Not that he has any plans to move from his city lot in the heart of Winnipeg to a farm. Instead, the instructor of international development studies at Canadian Mennonite University (CMU) plants where he is planted.

In his south-facing front yard, he and his wife, Julie Derksen, along with their two young children, have dug up a good portion of their lawn and put in a vegetable garden. They have added a cold-frame greenhouse against the house, harvest rainwater off the roof and they will have a clutch of chicks in their backyard coop come June.

“We have just eaten the last of the tomatoes we grew in our garden last year,” says Lobe, hoping to harvest even more this year.

At CMU, Lobe is excited about entering the third growing season of the university’s on-campus farm. The half-hectare farm on the city campus follows a Community Shared Agriculture (CSA) model.

“CSA is a different marketing approach that invites sharers of the farm to purchase a share in the beginning of spring and to share the risk of the farm throughout the season,” explains Lobe. Last year, it grew between 65 and 70 varieties of vegetables for 25 households. There are plans to expand that to 30 households this year.

“We are looking to provide a kind of example of what urban agriculture looks like,” says Lobe. “The literature on urban agriculture is exploding as you have more and more folks moving from rural areas to urban centres. This is happening in many other parts of the world and is becoming a main way of meeting food-security needs. We’re trying to explore what that means in a North American context.”

Lobe’s interest in farming stems in part from his six years of work with public policy and advocacy for the Canadian Foodgrains Bank. “One of the key issues was Canada’s aid dollars and how we were, or were not, supporting small-holder agriculture in the global south,” he says. “After six years of writing policy briefs and research papers on small-scale farming, I continually found that I knew very little about the hands-on work. I wanted to take some of the learning from the books into my hands.” (See “Suggested reading” sidebar above.)

Lobe is grateful to be in a place that allows him to write, think and teach about sustainable agriculture as well as practise it. “There is something about engagement with the farm that allows for ongoing reflection about the incarnation and the embodiment of who Jesus was and is,” he says. “It requires and nurtures the discipline of patience.”

Physical engagement with the land and caring for creation brings the land back into the conversation about people and God, leading Lobe to exclaim, “I can no longer imagine my faith outside of this work.” 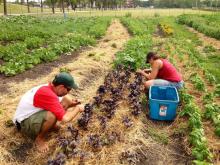